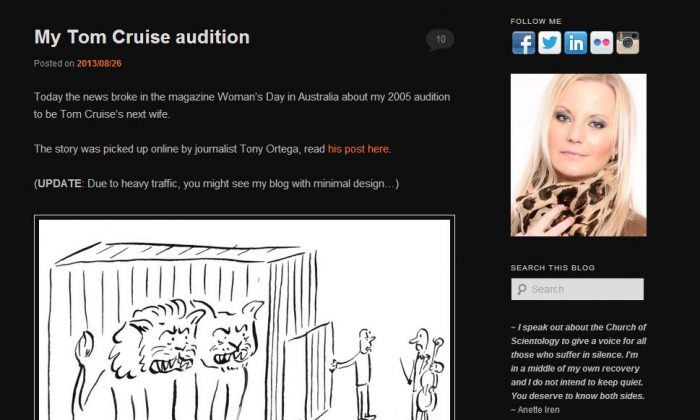 Anette Iren Johansen, a former member of the Church of Scientology, claims that she “auditioned” to be the wife of Tom Cruise before he married Katie Holmes in 2005.

Johansen, who said she stopped taking Scientology classes in 2010, claimed that she was forced to sign a waiver not to reveal details about it. Her interview was published in Australia’s Women’ Day magazine and was also published on Scientology blogger Tony Ortega’s website.

The Church of Scientology, in a statement to the Irish Independent, said that “we stand by the statement we issued last year: there was no project, secret or otherwise, ever conducted by the Church to find a bride [via audition or otherwise] for any member.”

Johansen, who is from Norway, said she was asked the questions at Scientology’s location in Copenhagen.

“They asked me so many questions about my life, my family background, everything I’d ever done in Scientology. There was a lot of talk about Tom Cruise at that time — he had just been in Norway [hosting] the Nobel Peace Prize concert,” she said.

Johansen describes herself as a “Norwegian Adventurer, Cornet Player, Chemist and Scientology Whistleblower” and has a blog about her experiences.

Ortega said that Marc Headley, who split from the church but worked on its International Base doing auditions, corroborated Johansen’s story.

“That was for Tom Cruise, absolutely,” he said. “Those are the exact same questions that they were asking the other girls.”

A representative with Scientology told the Hollywood Reporter that Headley lacks credibility.

“He left the Church nearly a decade ago,” said the representative, referring to Headley. “He lost his position after attempting to embezzle at least $13,000 in Church funds. He then tried to sue the Church only to have his case dismissed by a federal court judge, who further ordered him to pay the Church $42,000 in court costs after the dismissal was upheld by the 9th Circuit Court of Appeal.”