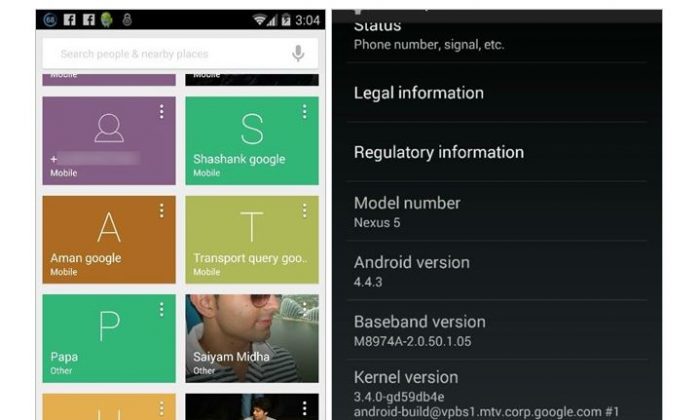 The Android 4.4.3 KitKat update is an extremely hot topic after a photo was accidentally posted on the Google Nexus Twitter account.

That photo appeared to show an updated dialer app.

Sprint also added details about the 4.4.3. update, which was rumored to be ready on April 14, but it turns out that the company published the wrong information.

A user on the forum XDA contacted Google support staff, and was told that Sprint posted ‘inaccurate” information.

The update was confirmed by Spring to still be coming, at some point.

“Due to an issue with the software, this update has been put on hold. Will update this post as soon as the rollout resumes,” a Sprint representative posted on community forums.

(The update to the dialer app, per Google on Twitter)

People following the situation say that the update may only be coming to Google Nexus 5 because the Sprint representative didn’t reference it coming to any other devices.

Android developer Llabtoofer posted on his blog that the update “is under final tests and latest flagships like M8 and M7 both will get 4.4.3 in near future.”

“I don’t have news regarding other ‘One’  devices yet, but they might get it as well. But I can’t confirm/deny that yet,” he added.

Rumored details about the update include that it will fix problems with Bluetooth and Wi-Fi connectivity.

It may also add some color to the operating system as well, per some other leaked images, which are shown at the top of the article.

The release date for the update is rumored to be May though there’s no substantial proof of that.