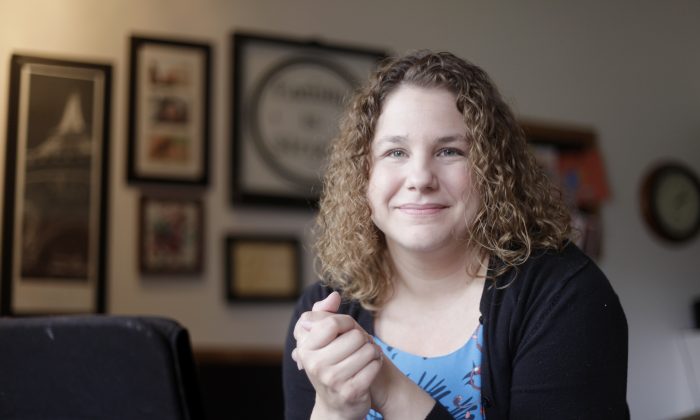 In this Friday, Nov. 20, 2015, photo, Andrea Quenette, an assistant professor of communication studies at the University of Kansas, poses for a photo at her home in Lawrence, Kan. Quenette is on paid leave after using a racial slur during a class discussion about race. (Mike Yoder/The Lawrence Journal-World via AP)
US

A white University of Kansas professor is on paid leave on her own request after five students filed a complaint asking for her to be fired over the use of the n-word.

Andrea Quenette, an assistant professor of communication studies, used the word during a discussion about the recent protest movement of black students at colleges across the country, including the University of Kansas.

“As a white woman I just never have seen the racism. … It’s not like I see [expletive]’ spray painted on walls,” she said, according to the open letter calling for her dismissal.

Quenette confirmed to Inside Higher Ed that she did use the slur, but “did so in comparing the University of Kansas to the University of Missouri, where many students reported seeing and hearing the word — and citing that as an example of the discrimination they face.”

“Quenette stressed that she never directed the word at anyone and used it as an example of a slur, not to hurt anyone,” the blog said.

“It was an open conversation about a serious issue that is affecting our campus, and it will affect our teachers. In that regard, I consider it within my purview … to talk about those issues.”

But the 10 graduate students, nine of which are white, saw the matter differently.

“It was outright racism,” said Amy Schumacher, a first-year Ph.D. student who was in the class, who is white. “I don’t think that it was an open dialogue — she wasn’t receptive to hearing any other ideas.”

Schumacher claimed that Quenette left the black student feeling “devastated” and also has a previous history being unsympathetic to students.

None of the students voiced their concerns during class, Quenette said. Schumacher said the students “had no words” and most “just shut down.”

In the open letter, the students said about the use of the word:

“This phraseology is inhospitable, anti-Black, and unacceptable. It has several negative implications. First, it has negative ramifications for our teaching pedagogy; it creates a model for teaching that is based on discrimination and outright oppression, which is antithetical and counterproductive to the goal of civic engagement crucial to the Basic Course. Second, it prohibits the creation of an inclusive and tolerant culture within the department that involves faculty, staff, and students.

“Third, it is unprofessional and based upon racially insensitive notions of how language is used and ignores research being produced by our very own department. Dr. Angela Gist gave a great colloquium on her research on the rhetoric of dignity and its implications for creating a positive, productive organizational environment. Furthermore, the usage of racially charged rhetoric ignores the plethora of phenomenological data we have about the way students of color experience the university. Most immediately concerning are the ways this terminology functions as terroristic and threatening to the cultivation of a safe learning environment.”

Quenette also addressed the other part of the discussion, which focused on low graduation rate for black students. The graduate students in the class blamed institutionalized racism, but Quenette said the issue is more complex and might include low academic preparedness coming into the college.

After a town hall the day before the next class, students demanded at the class that Quenette read their open letter. She did so but stopped partway through, citing legal implications. She then listened as some of the students read personal statements, and wanted to read a statement of her own to apologize but the students didn’t want to hear it.

“I feel terrible, upset and sad that I had hurt their feelings and made them feel uncomfortable, because I do care about them as people,” Quenette said. “I felt frustrated by some of the things written in the letter that I don’t remember happening like they described.”

“Someone said, ‘No, this is over,’ and they all got up and left,” Quenette said.

“Classrooms should be spaces for everyone to discuss issues openly and honestly, to make mistakes, to learn and to grow.”

The open letter has been accompanied by a social media campaign using a hashtag to call for Quenette’s firing.

The university is currently investigating.