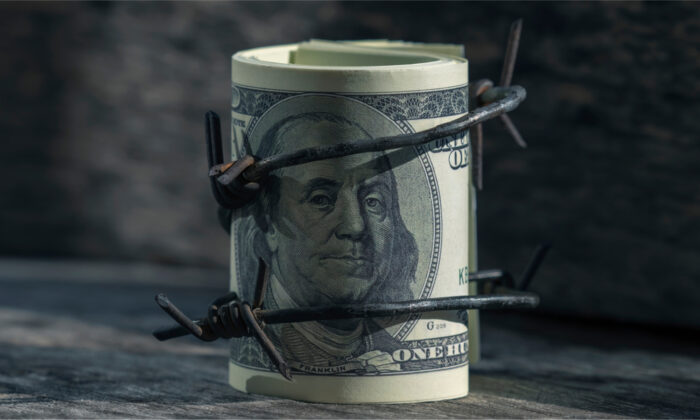 With the world reopening, and even U.S. blue states and cities repealing mandates, how optimistic should we be? A little bit is warranted, but not that much. What we are seeing right now in Ottawa, Canada, reveals the hegemonic depth of the system that gave us lockdowns, then mandates: It’s now capable of freezing your accounts and essentially starving you and your family.

This was a wild conspiracy theory last year. Now, it’s very obvious that this is where many governments want to go. We’ve seen examples just in the past week.

The truckers in Canada deployed the crowd-funding platform GoFundMe and raised $9 million, until suddenly, the platform said that it wouldn’t distribute the money yet, pending the release of a clear plan on what the truckers were going to do with it.

Many of us immediately smelled a rat. Sure enough, a few days later, GoFundMe announced that it wouldn’t give the money to the truckers, but rather to other charities of its choosing. In other words, it would steal the money. That outraged many people, among them Elon Musk, and the internet blew up in fury. At that point, GoFundMe returned all the money to the donors.

In the next act of this drama, the truckers went to GiveSendGo, a platform that seems more independent and that pledged to give the money to the truckers. With no promotion or even a clear link on Google on where to send money, the new method raised even more money. This was entirely thanks to uncensored networks where people were sharing information.

But the story was far from over. The platform was hit with denial-of-service attacks from malicious actors and then hacked. The thing went down hard and had to be rebuilt. The data on donors was leaked to the government and then to the Canadian Broadcasting Corp., which contacted donors under the guise of “doing a story” on the funding. It was a clear attempt at intimidation.

The minister of finance got into the act and essentially declared that anyone using these to provide funding to the truckers was engaging in an illicit activity—essentially, terrorism. Without missing a beat, the minister of justice for Prime Minister Justin Trudeau went further to declare that anyone who has given large figures through these platforms “should be worried” about having their bank accounts frozen.

So there we have it on record: The Canadian government has declared that it can freeze anyone’s bank account and seize the contents based on their political views or charitable actions. In the midst of all of this, Trudeau declared emergency powers that allow the government to do this to all for non-compliers, and do so without any court order.

The next step in this astonishing drama: crypto. The platform TallyCoin somehow and almost miraculously navigated all the compliance regulations and became a viable way to use crypto to crowdfund, thus bypassing banks (so long as you don’t convert your crypto to dollars).

Very quickly, the platform raised $1 million for the truckers. This was all put together by a group of truckers calling itself HonkHonkHodl. That means, of course, hold crypto, don’t sell.

Almost immediately, the ​​Royal Canadian Mounted Police (Canada’s FBI) sent letters to many crypto exchanges demanding that any assets flowing through their systems that are known to be intended as donations to the truckers must be reported immediately. At the same time, the truckers are being told to leave. Two leaders of the convoy have been arrested.

Yes, all these actions are clearly political, totalitarian, and rely fundamentally on the control of money and finance to shore up regime power and crush political opposition.

For weeks now, I’ve worried that Trudeau would pursue a Tiananmen Square solution. This was the strategy deployed in China in 1989 to forestall the type of regime meltdown that had characterized events in Eastern Europe and the former Soviet empire. For a while, it appeared that regimes could be toppled if enough people gathered in the streets. China showed otherwise: Bullets, tanks, and arrests of key leaders are often enough to shore up control.

These days, a Tiananmen-style solution takes a different form. With financial intermediaries forced to do the state’s bidding, rebellions can be put down with texts, emails, and a few clicks on an interface. Your assets are frozen, then stolen, and you are left without a job or any financial means at all. Jails aren’t even necessary.

Yes, crypto can help bypass the system, but it still must deal with three huge barriers: 1) the exchanges and platforms deal with enormous burdens in regulatory compliance, 2) the onramps to obtaining crypto are ever more intrusive, 3) the offramps to moving crypto out of digits and into cash are highly regulated. None of this is the fault of crypto. It’s a failure of the transition.

As an aside, the one word hardly spoken during this incredible drama is COVID. It was never really about a virus. The world is moving past the virus, and now left with only the massive and terrifying state machinery that emerged under the guise of public health, a principle which has oddly mutated into another priority: political health.

Since 2013, I’ve written about the possibility of a privatized monetary system. It seemed like a wonderful idea. Someday, we will get there, surely, in one form or another. But the transition has become extremely complicated, as government authorities attempt to use their existing regulatory hold on conventional money and regulated exchanges to institute a China-style social credit system.

Even now, I cannot believe that I just typed those sentences, which I used to hear only from very fringy commentators. Now, the fringe is the fabric. Anyone who hasn’t paid attention to the conspiracy theories of the past year has failed to anticipate most of the news.

Many of the world’s wisest minds have observed that the main means by which powerful states seize and retain control is through the realm of money. Guns help. Prestige helps. But in the end, it’s the control of money that keeps the people in servitude.

Crypto was once for geeks only. Now, it has become a tool for saving the working class from obliteration by hegemonic forces within the ruling-class financial structure. The workers’ revolution is taking a different path from what anyone in the 19th century could have ever imagined: from diesel to crypto to freedom.

Or so we can hope.