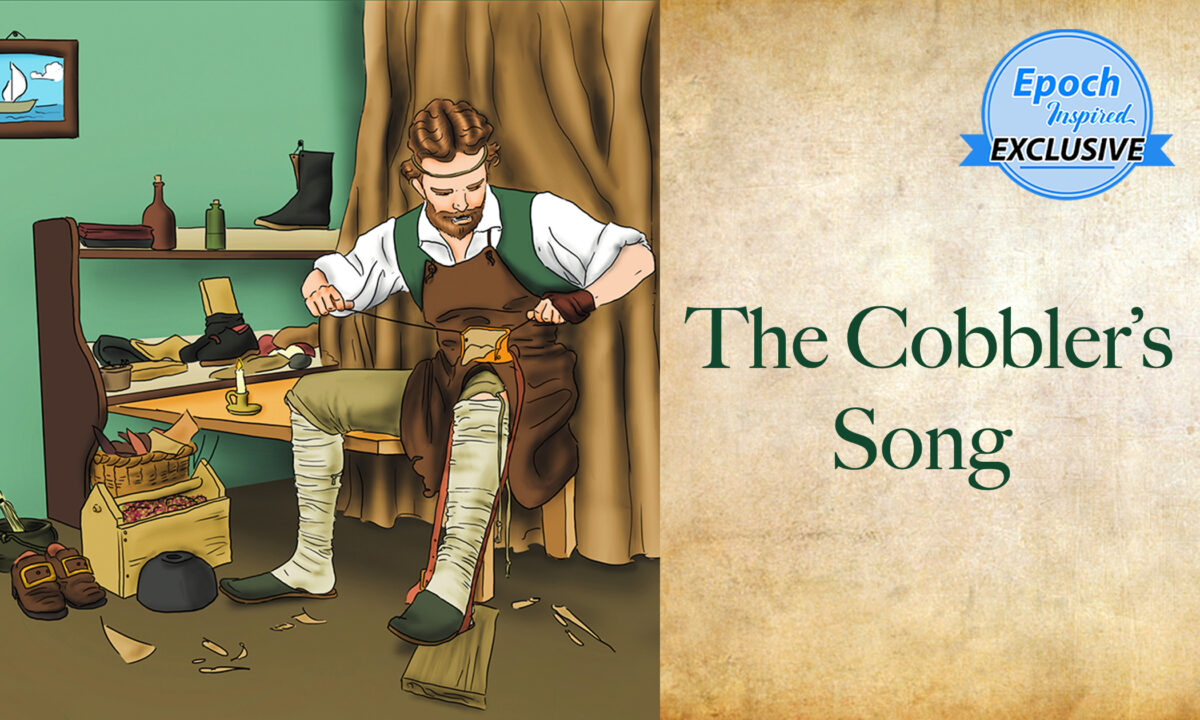 Ancient tales of wisdom remind us of the traditions and moral values that have been treasured all over the world. We hope the stories and messages in this series help uplift the hearts and minds of our readers.

“The Cobbler’s Song” tells the tale of how money doesn’t always bring the happiness it’s so often desired for.

A poor cobbler lived in the basement of a large house in Paris. He had to work from early morning until late night to make enough money to keep himself and his wife and children. But he was happy in his little dark room, and sang all day as he mended the old shoes.

On the floor above him lived a very rich man. His rooms were large and sunny. He wore fine clothes and had plenty of good things to eat. Still, he was never happy. All night long, he lay awake thinking about his money: how to make more, or fearing lest it be stolen. Often, the sun was shining in at his windows before he fell asleep.

Now, as soon as it grew light enough to see, the poor cobbler always got up and went to work. As he hammered, he sang. His song floated up to the rooms of the rich man and woke him.

“This is dreadful!” said the rich man. “I cannot sleep at night because I’m thinking about my money, and I cannot sleep in the daytime because of the singing of that silly cobbler. If he had something to worry about, he would not sing so much. I must think of a plan to stop him.”

So the rich man sat down and thought the matter over. “Let me see,” he said to himself, “what worries men most? Why, money to be sure! Some men worry because they have so little. The cobbler has little enough to be sure. Still that does not worry him, he is the happiest man I know.

“Other men worry because they have too much money. That is my trouble. I wonder if it would worry the cobbler if he had too much. That’s the idea. Now, I know what I shall do.”

“What can I do for you?” asked the cobbler, wondering why so fine a man should enter his little shop.

“Here, I have brought you a present,” said the rich man, and he gave the poor man a purse.

The cobbler opened it and saw that it was full of shining gold pieces. “I cannot take all this money!” he cried. “I have not earned it. Take it back.”

“No!” answered the rich man. “You have earned it because of your songs. I give it to you because you are the happiest man I know.” Then, without waiting for any thanks, the rich man left the shop.

The cobbler turned the gold pieces out on his table and began to count them. He had counted to 52, when he looked up and saw a man passing by the window. He quickly hid the gold under his apron and went into the bedroom to count it where no one could see him. He piled the coins up on the bed. How golden they were! How bright! He had never seen so much money before. He looked and looked at the money until everything in the room seemed golden and bright. Then he counted it slowly.

“One hundred pieces of gold! How rich I am! Where shall I hide it for safe keeping?” First, he hid it under the covers at the foot of the bed where he could see it from the workbench. Then he sat down and looked towards it. “It makes a lump under the covers,” he said, “perhaps someone else will see it and steal it. I think I will hide it under the pillow.”

While he was putting it under the pillow, his wife came into the room. “What is the matter with the bed?” she asked. The angry cobbler glared at her and drove her from the room with angry words; the first cross words he had ever spoken to her.

Dinner time came, but he could not eat a mouthful. He was so afraid somebody would steal his treasure while he was at the table. By supper time, he felt worse. Not a note did he sing all day long. Not a kind word did he speak to his wife. He went to bed half sick with worry and fear. All night long, he tossed on his pillow. He dared not go to sleep lest he should wake up to find his gold gone.

But upstairs, the rich man was happy. “That was a good plan,” he said to himself. “Now I can sleep all day without being wakened by the cobbler’s song.”

For a month, the cobbler worried over the hundred gold pieces. He grew thin and pale, and his wife and children were unhappy. At last, he could bear the worry no longer, so he called his wife and told her the whole story.

“Dear husband!” she said. “Take back the gold. All the gold in the world is not worth as much to me as one of your old glad songs.”

How happy the cobbler felt just to hear her say this. He picked up the purse and ran upstairs to the rich man’s room. Throwing the gold on the table, he cried, “Here is your money. Take it back. I can live without your money, but I cannot live without my song.”