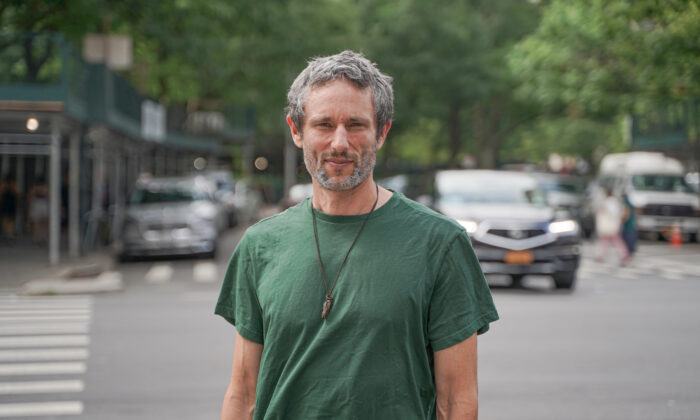 Charles Eisenstein is the author of “The Coronation,” a collection of essays that explore the paradigms, dynamics, ideologies, and mythologies that predispose people toward accepting narratives around safety and social control, especially during times of crisis. He argues that governments around the world were able to exploit the need to fit in and feel safe during the pandemic.

“Human beings are exquisitely attuned to reading the mood of the mob. It’s a survival mechanism. In order to fit in, we instinctively adopt the correct opinions and profess those opinions, we signal the appropriate virtues, we respect the appropriate taboos that mark us as part of the in-group and not part of the sacrificial subclass,” Eisenstein said on EpochTV’s American Thought Leaders program.

“This is an ancient, powerful, psychological disposition that fascists and totalitarians exploit in order to control society.”

The conditions for “COVID hysteria” didn’t just start in 2020, Eisenstein noticed that these conditions were well-established by 2017 when the Zika virus popped up, although it was not deadly enough to implement radical public health policies, the “ideological machinery was already in place” for a transition to a “fully medicalized society.”

This approach puts control and safety above all else, said Eisenstein, and puts medical authority above all other authority.

Eisenstein said it is a misnomer that the government can “save lives” and stop death with policies, and it would be more accurate to say “postpone death” and focus more on the quality of life instead of trying to control the inevitable.

“If you hold that [stopping death] as of paramount importance, then you can use it to justify anything, and that’s exactly what we saw. That was the justification for the suspension of civil liberties.”

Eisenstein said the prevailing belief that human progress and advancement “means an increasing ability to dominate and control the world outside of ourselves,” is false and brings more suffering, and is based on the idea that humans alone have intelligence and consciousness.

But Eisenstein’s view, which is rooted in ancient cultures and spiritual teachings, is that all things have intelligence and consciousness and do not need order imposed on them by humans.

“It becomes a matter of participating in the unfolding of life and beauty in the cosmos, not on dominating and imposing it. The pathology that expressed itself in the COVID madness, in the hysteria … It’s not like some passing phenomenon, but it’s pointing at a very deep revolution that we are at the brink of,” he said.

Unifying Around COVID for Sense of Control

Mandates to wear masks, socially distance, and get vaccines were all a part of this ideology of control to fight the external enemy of the virus, he said. Those who did not comply were targeted and scapegoated as anti-vax, uncaring, or ignorant.

“Any time that you invoke an external enemy to unify you, it always is mirrored with an internal enemy, which is the traitors, the heretics, the non-conformists, the taboo-breakers,” said Eisenstein, “So there always is some kind of purge, or some kind of authoritarianism, police state environment in these times of existential crisis.”

We can see this need for control, of finding an external enemy, play out during other times in history, where one group was scapegoated like during the Salem Witch Hunts and Nazi Germany, said Eisenstein.

On the level of health, the more you try to eliminate all viruses and germs, the weaker your immune response becomes.

“But the more you isolate yourself from germs, the more vulnerable you become to whatever germs can get through your bubble, because your immune system gets weaker and weaker [and] not to mention your body ecology deteriorates.”

Humans Need a Sense of Belonging

Another factor that contributes to the ideology of control is our diminished connection to our extended family, larger communities, and nature, said Eisenstein. In past societies, people lived in small villages for generations and knew the people and land around them well.

“We are very vulnerable to substitutes for a real grounding, a sense of belonging. Those substitutes could include membership in an opinion tribe, on the internet, in a political ideology, or by subscribing to any story,” he said.

In order to get that sense of belonging, people create groups and make one group good and the other bad.

“And then the way to a better world is that you conquer and destroy and humiliate the bad guys, kind of the same attitude as getting health, achieving health through conquering a virus,” said Eisenstein.

There are viruses that get people sick but when we let this ideology of control take over, it leads to greater problems and more destruction, he said. “Then we end up fighting an endless war and justifying everything that war justifies, including totalitarian control over society.”

Join Against the ‘Enemy’ or Be Targeted

The unvaccinated were scapegoated, although not to the degree as the Jews in Nazi Germany who were exterminated, said Eisenstein. Nonetheless, in this COVID hysteria, many lost their jobs, were banned from social media, and excluded from family and social events.

As in his own situation, Eisenstein said, it took courage to stand up to this type of pressure and the ideology of control, especially in the midst of the pandemic hysteria. He said he has been attacked for “fomenting counter-narrative ideas about COVID-19.”

Fear and self-doubt silenced him for a short while and in that period, “I began to question everything, and I didn’t want to speak out emphatically until I had clarity and coherence within myself.”

Eisenstein said, more than wanting to hold a group of government bureaucrats responsible for the destructive COVID policies and mandates, “I really want to look at the dynamics, the ideologies, and the social habits that made [government control] all possible to begin with,” he said.

Part of his conclusion is that dehumanizing each other has created the current environment.

“Anytime you dehumanize somebody, you’re not in truth,” he said. “The truth about every human being is that they are a divine soul, a child of God, however you want to articulate it; like a full, sacred consciousness, looking from different eyes. That’s the truth.”

We Have a Choice to Make

“We got a preview like the surveillance, the censorship, the lockdowns, the mandates. That is a preview of a future where we continue to subscribe to the story of control, of progress equals control. We were shown that so that we can choose clearly and intentionally, consciously.”

In order to change the direction society is taking and the division in our world, people need to adopt non-judgment and compassion and stop trying to control everything; instead, people need to understand other beings and contribute to the betterment of the world.

“We’re meant to make creation even more beautiful,and to be agents of creation and to make the world even more alive, which is kind of the opposite of what we’ve been doing. But we have all of the technology and all of the skills to be gifts to the planet and not a burden on the planet,” he said.

In order to make this positive impact on the world,  “we have to understand that our well-being is not separate from the well-being of the rest of life.”