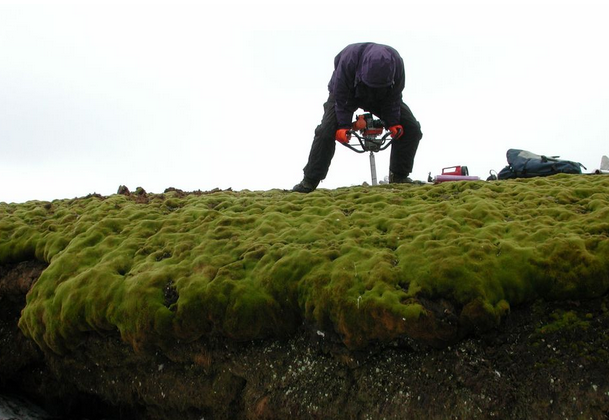 A core extending from the upper surface of a moss bank to a depth of 54 inches (138 centimeters) was taken on Signy Island in 2003. (Peter Boelen)
Science

Ancient moss was revived by scientists after last growing during the twilight of Rome, about A.D. 300 – 450.

The moss was buried on an island called Signy amid the rolling waves off Antarctica.

The discovery was made by researchers from the British Antarctic Survey and the University of Reading, Berkshire, U.K.

“It’s basically the first record of anything regenerating of that sort of age,” the survey’s Peter Convey, co-author of the report in Current Biology, told National Geographic. “There are records of microbes being pulled out of ice cores and permafrost, but nothing that’s multicellular has ever been recorded to do it.”

The island is about 850 miles southeast of South America’s Cape Horn, and is surrounded by icebergs.

Scientists cut through the core and placed the halves in sealed containers. When they exposed them to light and higher temperatures the halves began growing again.

Dana Bergstrom of the Australian Antarctic Division marveled at the news. “Life emerging from the ice is usually confined to animated movies,” she said.