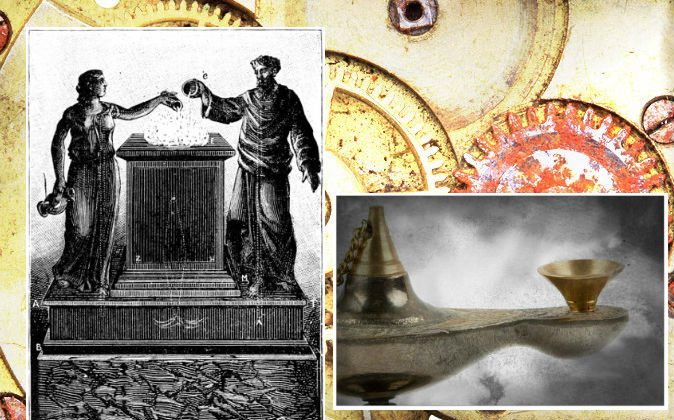 Imagine you’re in an ancient temple, dimly lit by rays of sunlight peaking in. A worshipper lights a fire on the altar, and steps back. A statue beside the altar begins to move! It pours libations to the god for whom the temple is built. A door behind the altar opens of it’s own accord, and the statue of that god appears.

But behind the mystique was the ingenuity of inventors, not the miracles of the gods.

Inventor Hero of Alexandria (10–70 A.D.) described in “Pneumatics” how such devices worked. The statue stood on a pedestal connected to the altar by a tube. The tube extended from the altar, through the statue, and into a cup held by the statue. Water was poured into the pedestal through a hole that was then corked up.

The doors are made to open automatically by a similar mechanism. Instead of the water in this mechanism being pushed up through a tube toward a cup, the water pushed into a bucket. This bucket then becomes heavy, serving as a counterweight.

The bucket will be pulled down by the weight of the water, drawing on a cord that has been wound around cylinders and attached to the doors in such a way that when it is pulled, the doors will open.

It’s all reminiscent of the modern tale, “The Wizard of Oz,” in which a normal middle-aged man uses similar ingenuity to appear as the great and powerful Wizard of Oz.

Saint Augustine said the perpetually burning lamps in the temple of Jupiter Ammon in Egypt and other temples, as described by Plutarch, may have been kept aflame by the intervention of demons.

Father Athanasius Kircher (1602–1680), considered by some to be the father of Egyptology, quotes an Arab named Schiangia: “”In Egypt there was a field whose ditches were full of pitch and liquid bitumen. Philosophers, who understood the forces of nature, constructed canals which connected places like these with lamps hidden at the bottom of subterranean crypts. These lamps had wicks made of threads that could not burn. By this means the lamp, once lighted, burned eternally, because of the continuous influx of bitumen and the incombustibility of the wick.”

In the book “Magic, Stage Illusions and Scientific Diversions Including Trick Photography,” Albert A. Hopkins wrote that artifice of this nature may have been used to keep the flames described by Plutrarch alive, “But the majority of them owed their peculiarity only to the precautions taken by the priests to feed them without being seen.”

He continued: “It was only necessary, in fact, that the wick, which was made of asbestos threads or gold wire, should be kept intact, and that the body of the lamp should communicate with a reservoir placed in a neighboring apartment in such a way that the level of the oil should remain constant.”

The Magic of a Legendary Entrance

Pliny the Elder (23–79 A.D.), an ancient Roman scientist and historian, wrote that when the gates of the labyrinth of Thebes were opened, a noise like that of thunder would resound.

This grand description may have an ingenious invention behind it. Hero of Alexandria described in “Pneumatics” how a trumpet can be made to automatically sound when a door is opened.

When the door opens, a system of pulleys, rods, and cords push a solid sphere part way into a vessel of water, as shown in Fig. 1 below. Air compressed by the water is forced through the trumpet, making the trumpet sound.

*Image of machine gears via Shutterstock