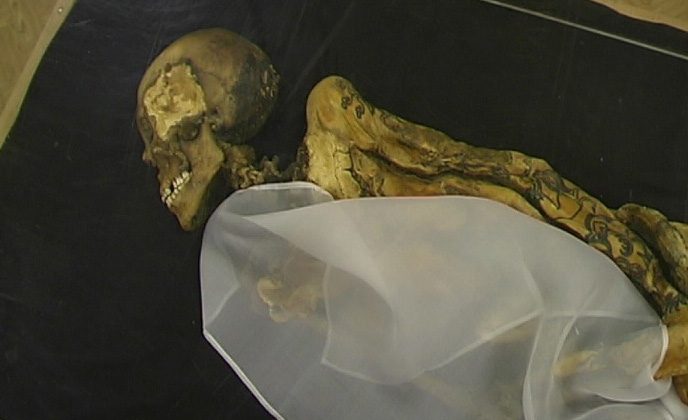 Tattoos have played a role in the lives of prehistoric and modern man alike. Societal status, art, religion, and medicine all create a tradition in tattoo design that spans across centuries and around the globe. Depending on the times and culture, body art was considered to be lowly and barbaric, or a signifier of very high, royal status. These age-old images were symbols of power, healing, magic, and were a reflection of the natural world.

The decorative markings were often made of dyes, soot or burned plant material.

Evidence of this ancient practice can be seen today preserved in mummies. We take a look at some mummies and their mysterious markings:

One of the more famous tattooed mummified human is Ötzi the Iceman, a well preserved natural mummy found in the Alps on the Austrian–Italian border in 1991. Ötzi lived and died in the mountains around 3,300 BC and his body was frozen in the ice. This prehistoric man’s simple, dark marks amazed scientists as they had never found so early an example of tattoos for medicinal purposes. The marks seemed similar to acupuncture treatments, a therapy long thought to have originated in Asia 2000 years later.

Joann Fletcher of the department of archaeology at the University of York in Britain told Smithsonian that “the distribution of the tattooed dots and small crosses on his lower spine and right knee and ankle joints correspond to areas of strain-induced degeneration, with the suggestion that they may have been applied to alleviate joint pain and were therefore essentially therapeutic”.

The ‘Princess of Ukok’ is the mummy of a young woman found in 1993 in Altai, near the shared border of Russia, Mongolia, China and Kazakhstan. She’s believed to have been a shaman or spiritual leader of the nomadic Pazyryk people from 2500 years ago. Buried along with the woman were male warriors and a team of six horses. A Scythian warrior’s body was discovered and was heavily tattooed with animals and flowing lines. Unlike the simple lines found on Ötzi the Iceman, these tattoos were expressive, elaborate, and colorful, proclaiming an important role within the tribe. Signifying her prestige, the young woman sported ornate images of panthers and sheep, leaping deer with big antlers, and even mythological creatures such as griffons and winged leopards. Many say the tattoos look modern, like something you would see people wearing today.

Novosibirsk scientist Natalia Polosmak told The Siberian Times, “Compared to all tattoos found by archeologists around the world, those on the mummies of the Pazyryk people are the most complicated, and the most beautiful […] It is a phenomenal level of tattoo art. Incredible.”

The designs are the best preserved ancient tattoos anywhere in the world.

The Lady of Cao

In 2005 in a funerary chamber deep within an ancient Peruvian ritual site, a Moche mummy was found exceptionally preserved, untouched since 450 AD. In yet another example of a high status burial of an ancient shaman woman, the chamber was filled with gold ornaments and symbols of power. The mummy sported several tattoos, which was a common practice in the Moshe world.

National Geographic reports that the tattoos were achieved using charcoal pigment embedded beneath skin with a sharp needle or cactus spine. The images were sophisticated geometric designs and creatures like spiders, catfish, snakes, crabs, and mythical beasts.

Ancient records make almost no mention of tattooing for Egyptians, but it was a practice now revealed by modern technology. The mummy of an Egyptian woman dating to 700 A.D. was examined using advanced medical scans. Through the linen wraps the scientists discovered a small tattoo on her inner thigh. The mark, translated from ancient Greek, reads “Michael”, and includes a cross symbol. Researchers suspect this may have been worn there as spiritual protection, an appeal to the Christian Archangel Michael. Pregnant women in times past would tattoo divine names on their abdomens in the hope of a safe delivery, and others would reportedly wear them on their thighs to protect against sexual violation.

Back then, as today, tattoos were used to demonstrate one’s faith.

The Beauty of Loulan

No mummy found to date receives as much attention for its good looks as the “Beauty of Loulan”, found in China’s Tarim Basin and dating back 3800 years. The woman’s face is so well preserved from the arid, salty climate that her delicate features remain intact even after the nearly 4000 years since her death; she has smooth skin, full lips, and dark eyelashes .  The mummies found in the Tarim Basin surprised many with their red and blonde hair, their tall height, and their loomed fabrics, and researchers suggested they were unrelated to China’s ancestors. DNA testing revealed they originated from Europe and were Caucasian travelers and merchants. Tattoo artist and writer for Ancient Origins , Margaret Moose notes details of the Tarim mummies, “One of the female mummies has crescent moons and ovals tattooed on her face.  The moon designs are suggestive of Goddess worship in many cultures and the presence of the tattoos on her face tells me, a tattoo artist, that whatever the designs meant they were very important to her since she chose to display them where she could not hide them; they also immediately identified her to others.” Male mummies from that find possessed animal facial tattoos with curling line designs.

In life and in death tattoos and body art endures. Ancient tattoos were worn for many of the same reasons they are today, and it’s not a tradition that will die out with the mummies.