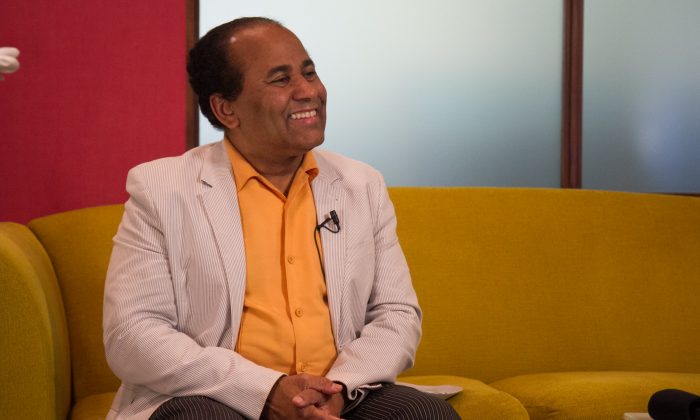 NEW YORK—Fashion is more than the next new fad, said designer and producer of Couture Fashion Week Andres Aquino. It’s a vignette that takes us to another time, another way of life, for no matter how much designers are focused on moving forward, they will always look to the past for inspiration.

“For instance, people tend to look to the ’40s, ’50s for inspiration, and now the Gatsby fashion is popular,” Aquino said. “Fashion itself is history.”

He said that each style, each ethnicity’s fashion, provokes a particular feeling unique to its cultural identity. Yet there is one couture that particularly stands out to Aquino as a rarity.

“Han couture brings a feeling of calm, serenity and peace…that’s what people feel when they experience this show,” Aquino said. “This peaceful feeling is something rare in New York, and it’s beautiful.”

Han couture is named after the Han, the largest ethnic group in China. It refers to the clothing from ancient times to the end of the Ming Dynasty in the mid-17th century.

As part of Couture Fashion Week, a runway show will display the the most esteemed collections from New Tang Dynasty (NTD) Television’s 4th Global Han Couture Design Competition, and is followed by the competition award ceremony.

The competition contestants were required to do research on traditional Chinese fashion, since its history is not part of fashion design curriculum in China.

This year the competition received more than 160 garments from around 70 Han Couture designers.

Looking to the Past

In ancient China, people designed clothes according to nature’s harmony. There is a deeper meaning behind each layer, sleeve, and alignment in Han costumes.

Chinese traditional culture was influenced by Buddhism and Taoism, which taught the belief in the unification of body and soul.

“Most of our other couture and fashion shows in general focus on a more practical fashion, but this Han Couture is purely a work of art,” Aquino said.

This year, Couture Fashion Week will incorporate technology with fashion, adding 3D elements to their programs.

The show includes fashion from a variety of cultures such as South Africa, and even indigenous Canadians. The designers are focused on using more eco-friendly garments this year.