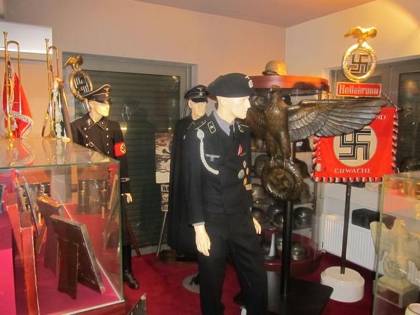 Anastasios Pallis, a fugitive businessman, had Nazi paraphernalia and numerous guns in his villa in Athens, Greek, police found after raiding it.

The businessman had 21 automatic guns, 13 pistols, and 60 knives in his home. Some of the guns were licensed.

A large number of cell phones, memory cards, camcorders, cameras, and wireless devices were found, too.

And in a specially designed room, police found Nazi flags, military uniforms, and statues and portraits of Adolph Hitler and other Nazi leaders, reported Enet.

Some of the paraphernalia, including Nazi helmets and swastikas, were kept in glass cases.

The raid came after retired British Army officer Edward Pringle-Stacey told police that Pallis had 4,000 weapons and is linked to the Neo-Nazi Golden Dawn movement.

In September a prosecutor in Athens charged Pallis with abduction and attempted blackmail. The charges followed statements from Pringle-Stacey that he was hired by Pallis to set up a service to protect Victor Restis, a shopowner who has been accused of embezzling money from a bank.

Pallis was at one time an aide to Restis, reported Ekathimerini.

Prince-Stacey also said that he was held against his will at Athens International Airport by three men working for Pallis.

Pallis is on the run.

In connection with the case, six Golden Dawn MP’s were stripped of their immunity on Oct. 16, reported ANSA. The six are either already in jail or under investigation for politically motivated crimes.

The vote came after a request by magistrates following the assassination on September 17 of anti-fascist rapper Pavlos Fyssas. Georgios Roupakias, a Golden Dawn militant, has confessed to the crime.

Pallis is accused of supplying the Golden Dawn group with weapons.

He is wanted on charges of attempted extortion, money laundering, and bank fraud.

Additionally, Greek officials seized two shipping containers belonging to Pallis at Piraeus Port, and found a luxury Chevrolet and an anti-aicraft machine gun from the 1940s.

The Golden Dawn political party and group frequently makes use of Nazi symbolism and members have praised figures of Nazi Germany, including Hitler, in the past.

It was deemed a criminal organization in September after the murder of Fyssas, reported the Guardian, and the group’s founder, Nikos Michaloilakos, was arrested by police.

Authorities discovered that the group has set up hit squads and during an investigation arrested more than a dozen members.