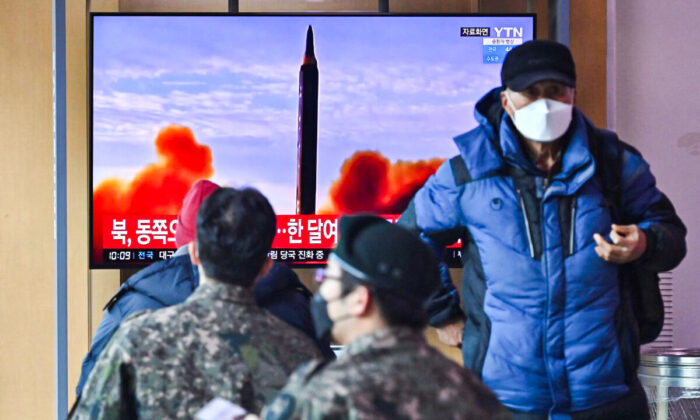 People watch a television screen showing a news broadcast with file footage of a North Korean missile test, at a railway station in Seoul, South Korea, on Feb. 27, 2022. (Jung Yeon-je/AFP via Getty Images)
By Aldgra Fredly

Analysts from the James Martin Center for Nonproliferation Studies at the Middlebury Institute of International Studies said in a report that the images were captured on March 4 by the commercial satellite firm Maxar.

The report’s lead author Prof. Jeffrey Lewis, stated that his team has been monitoring the Punggye-ri nuclear test site since the North Korean regime announced in January that it would consider resuming all temporarily suspended actions.

“In the image, we see very early signs of activity at the new site, including the construction of a new building, repair of another building, and what is possibly some lumber and sawdust,” Lewis said.

“North Korea uses a substantial amount of wood at the site both for buildings and shoring up tunnels. These changes occurred only in the past few days,” he added.

While the construction activities were described as “very preliminary,” Lewis said that the fact that they occurred suggested that North Korea had taken decisions concerning the status of the nuclear testing site that was demolished by the Kim regime in May 2018 as a sign of its commitment to end nuclear testing.

“One aspect of having so many commercial satellites in orbit is that we often catch construction activities in their very early stages, when it is difficult to conclude what is precisely is being built or why,” he said.

Lewis speculated that the images could signal that North Korea intends to restore the test site and begin nuclear explosive testing, though this could take months or years to complete.

He added that North Korea could also resume nuclear testing at another place.

“How long it would take North Korea to resume explosive testing at the site depends on the extent of the damage to the tunnels themselves, something we do not know with confidence,” Lewis said.

Pyongyang’s state-run media later claimed that the regime conducted an “important test” for reconnaissance satellite systems, without specifying if a missile was utilized. This was the second such launch in a week to test a spy satellite.

The United States has been urging for a return for a dialogue, a call Pyongyang has ignored due to what it says are the U.S. and its allies’ hostile policies.

A government official said that South Korea is working closely with the United States and the IAEA to monitor North Korea’s nuclear and missile activity at Yongbyon nuclear complex, Yonhap News Agency reported.