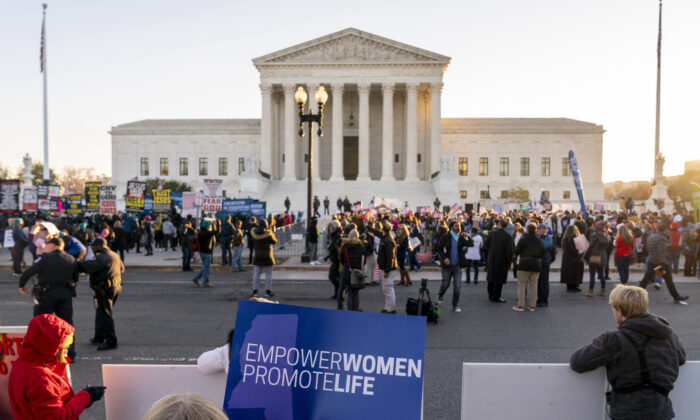 The Supreme Court’s decision in the Mississippi abortion case is likely to be one of the landmark cases of the 21st century. Many fascinating things came up during the arguments before the court, but here’s one thing that didn’t come up: the horror of abortion itself. That horror isn’t merely that a woman kills a child, but that a woman kills her own child.

From the dawn of history, this has been viewed in many, if not most, cultures, as an abomination. Shakespeare puts these words into the mouth of Lady Macbeth: “I have suckled a baby, and I know how sweet it is to love the baby at my breast. But even as the baby was smiling up at me, I would have plucked my nipple out of its mouth, and smashed its brains out against a wall ….” For Shakespeare, this was intended to expose Lady Macbeth’s psychology as pure evil. A woman who would murder her own offspring is a scourge on the human race.

Perhaps recognizing the sheer baseness of defending abortion, Solicitor General Elizabeth Prelogar, representing the Biden administration, has attempted to argue against the Mississippi law on the basis of the sanctity of precedent. The legal term for this is stare decisis, which means “let the decision stand.” Roe v. Wade has recognized abortion as a constitutional right since 1973, so let’s continue to affirm it as a constitutional right going forward, the argument goes.

Interestingly enough, the argument for stare decisis or precedent is a conservative one. It relies on the presumptive validity of tradition, of doing today and tomorrow what you did yesterday and the day before that. I once heard a student in my class argue this general position. If an institution has persisted for a very long time, then, even if the rationale for it is unknown or obscure, we should accord it a high degree of respect, because its very longevity shows that it must serve some important social purpose, he said.

To which my professor destroyed the argument in a single sentence by replying, “What about anti-Semitism?”

The point is that longevity by itself can’t tell you whether a tradition should be cherished and upheld. There are good and bad traditions. Slavery and segregation are also U.S. traditions that weren’t merely permitted in society, but also upheld by the force of law.

With his customary clarity, Justice Clarence Thomas got to the heart of the matter when he raised the question of where the specific abortion right could be found in the Constitution.

The simple truth is that there’s no abortion right specified in the Constitution. Hence, the argument of the pro-choice camp can be summarized this way: Regardless of the original justification for Roe v. Wade or even if there is no constitutional basis for the decision at all, it’s still a decision, and it has lasted for nearly half a century, so this court shouldn’t overrule it.

Justice Brett Kavanaugh raised the point that the Supreme Court has, on multiple occasions, overturned precedents. He gave as examples Baker v. Carr, which created the basis for one person, one vote; Miranda v. Arizona, which required police to administer so-called Miranda rights to suspects in criminal custody; and, of course, Brown v. Board of Education, which outlawed “separate but equal” and ended legal segregation in public schools.

The Brown precedent was especially troublesome for the Biden administration, because it overturned a precedent in Plessy v. Ferguson that had stood for more than half a century. Kavanaugh’s point was that if Plessy was wrongly decided and the court was right to uproot that longstanding precedent, why shouldn’t this court, if it holds Roe v. Wade to be wrongly decided, uproot it as well?

Prelogar insisted that precedents can only be overturned if the court discovers new information unavailable to the court that decided the original case. The difficulty for Prelogar—and for the Biden administration—is that the Brown court had no new information in 1954 that the late-19th-century Plessy court had lacked. Basically, the Brown court regarded segregation as morally wrong—a violation of basic human dignity, as well as equal protection under the law—while the Plessy court regarded it as morally permissible.

Who can say that in the abortion case, there has been no new information since 1973? The Roe decision was pegged to the concept of “viability,” the condition of the fetus being able to survive outside of the womb. But the point of viability has moved up due to scientific advances over the past several decades, and we can reasonably expect that over time it will move up further still.

Additionally, while the Roe court muddleheadedly speculated over whether the fetus is a distinct human being. Today we can see, through the technology of ultrasound, that the fetus, while attached to the mother, is nevertheless its own person, with its own heartbeat, its own organs, and its own distinctive genetic makeup. Conjoined twins are also attached to each other, but there are still two distinctive human beings there: We can’t say that this is a single individual with two heads, four eyes, and 20 toes.

For nearly 50 years, we’ve lived with the lies and atrocious arguments of those justifying abortion. From what I saw and heard at the Supreme Court, a clear majority of the justices have had enough. They’re ready to uphold the Mississippi law that would allow states to restrict abortions after 15 weeks.

They might even be ready—and I sure hope they are—to chop off the head of the snake. It’s time to end Roe v. Wade.