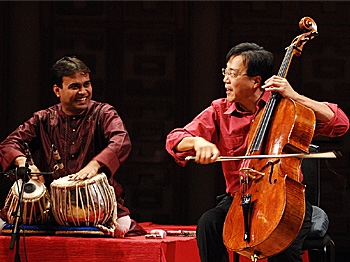 An Interview With Yo Yo Ma

Yo Yo Ma (in Chinese, a double-friendly horse) has traveled a long journey, culturally and musically, to present what has become an epitome of his work—the Silk Road Ensemble.

On Ma’s official website, the Silk Road project is described as “a collective of internationally renowned performers and composers from more than 20 countries.

“Each ensemble member’s career illustrates a unique response to what is one of the artistic challenges of our times: to maintain the integrity of art rooted in authentic traditions while nourishing global connections.”

Prior to the Silk Road Ensemble coming to Philadelphia (the Mann Center on Aug. 11 and the Kimmel Center on Oct. 17), The Epoch Times interviewed Mr. Ma. He talked about his cultural background, parental influence, and college experience. He described how all of the above played a role in defining who he is today: a human being first, a musician second, and a cellist who takes stretching boundaries as a constant, third.

Mr. Ma was born in Paris in 1955. His Chinese parents (a musician father and singer mother) left China to escape the chaos of China’s wartime, which was exacerbated by the rising communist threat. A child prodigy, he began playing cello at the age of 4 and moved to New York with his family when he was 7.

Shortly after he landed in New York, he performed at the Kennedy Center at a fundraiser hosted by Leonard Bernstein and attended by President Kennedy and his wife. He enrolled in the Julliard School at 9 and studied under Leonard Rose.

At 17, he chose Harvard over music school in order to study the humanities. The Harvard experience provided him two lifelong gifts: a mind enriched by a broad liberal arts education and a wife, his first love.

Mr. Ma, 55, is considered the world’s greatest living cello player. He has won 14 Grammys and has performed on five continents at venues ranging from Carnegie Hall to Sesame Street.

He lives with his wife, Jill Hornor, and their children, Nicholas, 18, and Emily, 16, in Cambridge, Mass.

The Epoch Times: You’ve lived on different continents, in different cultures, and have traveled extensively around the world. How has this influenced you and defined your character?

Yo Yo Ma: The most important thing with music, with an artistic thing, is to start from the inside. It’s like someone inviting you into their home. … Having traveled around the world, I’ve had many experiences where people take me inside, and once they take you inside, you can look at how someone looks at the world from inside another place.

Then you have different perspectives. The more places you’ve been taken inside, the more perspectives you have, which means you can possibly have many answers to the same problems.

Epoch Times: What is your greatest source of inspiration and strength when it comes to taking risks to expand music beyond conventional notions?

Mr. Ma: Two things, I think, give you inspiration: one, developing an imagination and a very consistent and rich and disciplined imagination. When it comes to taking risks, if you can fully imagine what you’re risking and where you want to go to with that imagination, that’s one source of strength.

Another source of strength comes from what you’ve practiced in terms of going from a concept to reality. So for an architect, the more times you have drawn something on paper, you know it can actually turn into a building, and it doesn’t fall down.

The more you have practiced that muscle, the more, for a musician, you’ve practiced … imagining something, and it actually turns into a musical building … so those two things, the concepts and reality, and the strength of the imagination, are things that can hold you in good standing when you want to take a risk: Do I dare cross into this territory that I don’t know anything about?

Epoch Times: Confucius said, “At 30, I was able to stand on my own feet; at 40, I was no longer befuddled; at 50, I knew the mandate of heaven; at 60, my ears were attuned to cosmic wisdom.” Can you please share the two most important stages in your life that have had the greatest impact on you as a person and as a musician?

In terms of two important moments, I think they both have to do with probably the first one, probably going to college because I had played cello for many years by that time—for at least 10 years. So to go away to school and to be with other young people who are so passionate about what they’re doing, and to see how they think and act differently from me, but they’re very serious about what they’re doing—it was like traveling to 500 different countries but in your dormitory.

It’s like traveling the world because each person was a very well-formed individual but coming from a very different place, and I think that exposed me to a much larger world than I knew before. Whether it was psychology or anthropology or astronomy or literature, suddenly, oh my goodness, you could look at the world in so many different ways. And that’s something that was a very powerful stimulus to my thinking.

And I think the second thing was probably having children. I think once you have a child, you’re, one, no longer immortal. In your 20s, you think you can live forever. And two, you’re not the center of your own world anymore because there’s a child there, and I think you learn in a different way the meaning of love.

It’s a very different sense of caring, and in a sense, having the child makes you care differently about the world because whatever I did before, well, if I died, then fine. But suddenly, it’s like, no, wait a minute. If I died, that’s not good for the child, and also my actions—if they have bad consequences. Forty years ago, for example, if I throw away plastic, I’m going to be fine, but I think maybe [it’s] less good [for] a world for my child. And so I think about education differently. I think about the way we live on our planet differently.

Epoch Times: Can you please share your music education when you were very young?

Mr. Ma: My father was a very good storyteller, and he would tell us stories all the time: “The Romance of the Three Kingdoms,” legendary figures Zhu Geliang, Cao Cao. He gave me a very good background on what were valued priorities in cultures, all the Confucius [ideals] like harmony, filial respect, and with a slight [amount of] Daoism and Buddhism thrown in—those kinds of thoughts and values.

I never lived in a Chinese society, so it was really having this parental background and taking Chinese history in college, where we studied some of the literature, and traveling in Asia. Japan was one of the first Asian places where I could see Confucius at work.

Epoch Times: The Chinese character “Yao” (medicine) is made of the character “Yue” (music). The creation of the character for music is based on a legendary story about Huangdi, the Yellow Emperor, using music to heal and to call back the souls of dead soldiers in a war. Please share your views about music and its role in humanity.

Mr. Ma:Chinese culture has always talked about music in a very special way. It’s reflective of something very powerful and [has] a spiritual influence on people. For music, sound is energy, and energy is like touch, and we know how powerful touch is in healing. Even when someone can’t speak and you hold their hand, that’s very comforting.

If someone can’t speak and can’t react, but you talk to them in a soothing voice, to a very old person or a sick person or a baby, those things can make a lot of difference. A lot of people are now talking about music therapy, and I think music is a type [of therapy]. It does give not only comfort, but can in fact promote healing.

Epoch Times: Freedom is very important to artists. Under the communist system, artists were forced, through censorship or self-censorship, to direct all forms of personal expression to a single end: glorifying the communist regime and its achievements. What would you like to say to artists who are striving to stay true to their mission regardless of the adversity and risks they are facing in communist societies?

Mr. Ma: I think the whole purpose of any of the arts is to express something that has deep meaning. I’m very interested in what causes creativity. What makes people say, I want to write this down, I want to paint this painting, I want to write music? There’s always a reason, and it has to be a very strong reason.

In terms of expression, I think often creativity comes from dissonance. In other words … you live in one world, and then you move to another world. And you probably … are always thinking, What would it be like in China now?

And if you’re in China, you’re thinking about what goes on in the U.S., right? It’s the idea that if you’re trying to combine a number of different worlds into one world view, as in a work of art, that’s the kind of thing that is often one of the motivations in the creation of artistic works.

Epoch Times: You spent lots of time traveling and performing. What percentage of your time is spent with your family? When you are with your family, what’s your favorite thing that you do together?

Mr. Ma:I still spend half the time traveling and a little bit over half the time away. I think that actually over the last 30 years, I probably spent 20 years away from home, which actually put a lot of the burden of raising a family on my wife.

I think what she did with Nicolas and Emily is she never made me feel bad when I was away, going away to work, and she always said that was the important thing to my children. So they’re very grounded because family was the center. I always came back, tried to come back as often as possible, and I think the favorite thing that we like to do together is to laugh and have fun.

Epoch Times: Who is your role model in music?

Mr. Ma: I think my first cello hero is probably Pablo Casals because he said—something that I felt was so beautiful that I never forgot it—that he was a human being first, a musician second, and a cellist third.

I really like that and I completely believe that. I know he certainly lived and made his decisions like that, and I think that in that sense he was a really great model for me.