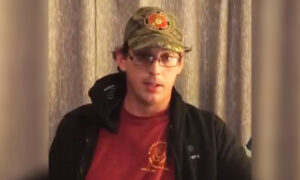 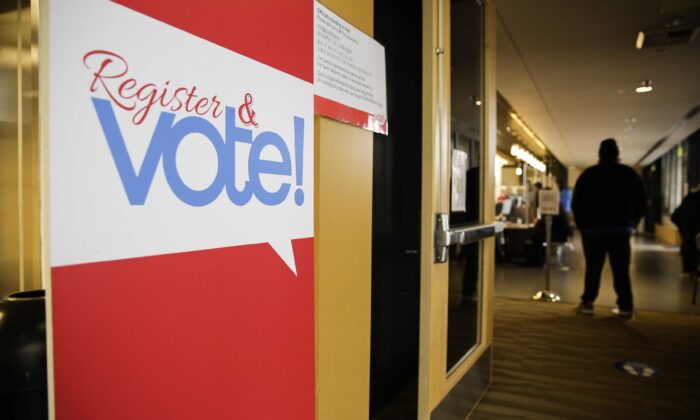 A sign for voter registration is pictured on Election Day at the King County Elections office in Renton, Wash., on Nov. 3, 2020. (Jason Redmond/AFP via Getty Images)
Viewpoints

The 2020 presidential election isn’t over yet. There are multiple legal challenges and recounts pending in key states, and, under a long-standing legal process, those events must play out before a winner is officially declared.

I know roughly half the nation doesn’t want to hear that, but it’s the truth.

We have been down this road before. Twenty years ago, a young television reporter stood outside the vice president’s residence in Washington for more than 30 days, keeping viewers up to date on the occupant’s challenge to the vote count in Florida. Vice President Al Gore was granted more than a month to contest that vote. His fight went all the way to the U.S. Supreme Court.

I remember this because that reporter was me. Day after day, protestors gathered outside Gore’s residence shouting, “Get out of Cheney’s house!” But it was not to be until the process had played out. In the end, Gore lost his challenge, and the nation watched an orderly exchange of power as George W. Bush became our 43rd president on Jan. 20, 2001.

So, why has the media prematurely declared this election to be over when not one state has certified its vote? Why have they elevated Joe Biden to the White House before the process has been completed? Answer: because they can. And because they never learn a lesson.

Back in 2000, all the major television networks jumped the gun, cited erroneous exit polls, and declared Florida had chosen Gore for president. As the evening’s count went on, the networks were forced to retract their pronouncement and give the race to Bush. As more votes came in overnight, the media, with egg firmly planted on its face, had to concede the race was just too close to call.

Today, we add in the undeniable proof that the media’s presidential polling is often wildly incorrect, and is it any wonder the public’s trust in media is at rock bottom?

Look, Joseph Robinette Biden Jr. may very well become our next president. But to borrow a popular trope: Laws matter. The process matters. #AmericaMatters. At this writing, the General Services Administration, the agency that facilitates the transfer of presidential power, says it won’t initiate funding for such a transition until a clear winner is named, “based on the process laid out in the Constitution.”

In this time of growing citizen cynicism, we need to know our election procedures can be trusted. What if overwhelming voter fraud is uncovered? What if a swing state’s recount reveals a different outcome? Simply wiping more egg off the media’s face isn’t going to heal the nation’s divisive wounds. In fact, it will deepen them.

No matter who ultimately occupies the White House next year, citizens have to find a way to come together, to mend the national fabric that has been so badly frayed by political polemics, racial disparity, street violence (cloaked as legitimate protest), and the pandemic’s toll on our economy and peace of mind. We cannot continue to go on as we have.

My favorite president, Abraham Lincoln, has been quoted as warning, “A house divided against itself cannot stand” and, “If we falter and lose our freedoms, it will be because we destroyed ourselves.” There is dispute about whether those quotes were accurately recorded, but it’s clear Lincoln warned the nation about the lasting effects its deep division over slavery might produce. Today, we are similarly divided.

It is time to realize that utopia doesn’t exist here on earth. It is time to stop believing the government can solve all our problems. It is time for each citizen to make it a mission to heal person-to-person divisions the best way they know how. It is time for everyone to work their fair share and not expect they automatically deserve special treatment.

No, this country is not perfect. But every day, in small towns and big cities nationwide, citizens work to make it a better, more just society. This country is worth working toward a more perfect union, and while the battle for clarity over this last election goes on, each of us needs to be patient and let the process work itself out.