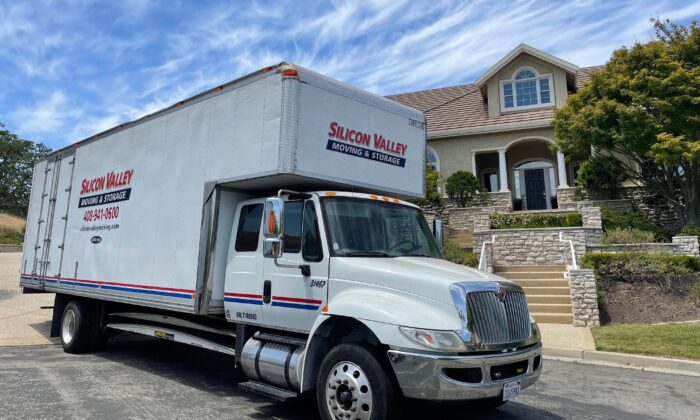 A truck from Silicon Valley Moving & Storage, based in San Jose, Calif., is parked outside of a home in an undated photo. (Courtesy of Joey Childs)
Southern California

When former Bay Area resident Terry Gilliam, 62, started the Facebook group “Leaving California” in 2018, the group attracted 200 members within six months. Four years later, the group has over 50,000 members, and the number continues to climb every week.

“In the last 30 days, we’ve added 11,000 members, which is darn close to a record,” Gilliam told The Epoch Times. “And it all started on January 1st … I think there is an absolute mad rush of people who are going to get out of California this year.”

Although he formed the group a few years ago, Gilliam didn’t take the plunge and move out of state to Florida until last year. Issues like homelessness, crime, politics, cost of housing, traffic, and exorbitant taxes pushed Gilliam away—and he’s not the only one.

When the group first began, Gilliam said Idaho and Texas were the most popular destinations for California residents. Now, he’s seeing more people moving to Tennessee and Florida as well.

Earlier this month, U-Haul reported that the top states for people moving within the United States in 2021 were Texas, Florida, Tennessee, South Carolina, and Arizona, while California was at the very bottom of the list.

Matt Merrill, U-Haul area district vice president of the Dallas Fort-Worth Metroplex and West Texas, said in a statement that many people are moving to Texas from California, New York, and other states “due to the job growth—a lot of opportunity here. The cost of living here is much lower than those areas. Texas is open for business.”

Demand was so high, U-Haul even ran out of trucks leaving California last year, according to the company.

Gilliam’s Facebook group has become a sort of haven for disaffected natives who are able to connect with local moving companies who are also in the group and eager for business. Though most of the users lean conservative, Gilliam said he didn’t start it for that reason.

“But I think conservatives in California are the most upset with what’s happening, so they’re the first to leave,” he said.

Mild weather, beautiful coastal beaches, and a vibrant, diverse culture bring tourists to California year-round. But for some residents, it’s not enough to keep them here anymore.

Alexander Ewing, 30, and his wife are moving from the Monterey Peninsula to Oklahoma in May.

“The business I worked for was headquartered here, and now they’ve moved their headquarters to the Midwest, and you know, that’s just one less reason to stay here,” Ewing told The Epoch Times. “So, it’s like over the years all the reasons to stay have kind of gone away.”

The state has the highest top income tax rate at 13.3 percent, with an 8.84 percent tax rate for businesses, in addition to permits and regulatory costs depending on the county and city. With a high cost of living and rent prices averaging $2,500 in competitive markets, mom-and-pop shops have to turn an incredible profit to stay afloat.

In the first six months of 2021, more than 70 company headquarters left California, according to a Hoover Institution of Stanford University report (pdf), which found the exodus was accelerating. Later that year, Elon Musk’s Tesla made headlines by relocating to Texas.

“Our findings identify the California counties that lost headquarters facilities, the states to which migrations occur, and extensive discussion of the reasons, including high tax rates, punitive regulations, high labor costs, high utility and energy costs, and declining quality of life for many Californians which reflects the cost of living and housing affordability,” the report said.

California’s own Legislative Analyst’s Office found that the state’s “outmigration is increasingly concentrated among older, more affluent people” in a report from last July. Data from the office also showed “a persistent, long-term net outmigration.”

“A key driver of migration between California and other states is living costs, particularly the cost of housing,” the report read.

The median cost for a house in the Golden State as of 2021 is more than $800,000, up 34.2 percent from the previous year, according to the California Association of Realtors. The U.S. national average is perched around $400,000.

U-Haul isn’t the only moving company getting a piece of the massive demand. Joey Childs, 22, co-owner of San Jose-based Silicon Valley Moving & Storage told The Epoch Times the past two years “have been like nothing I’ve ever seen before.”

“December, January, February, was a little slow. But last year was it was ridiculous—we were booked four or five months out in advance,” he said. “It’s getting very expensive to live here … with very high taxes. A lot of people that we move are also small business owners too, and it’s getting very hard for them to operate their business here. So, they’re just leaving, and it’s a no brainer.”

Childs said his family is also looking to relocate to Ohio soon and open a second location of their moving company there.

Nonpartisan policy research group California Policy Lab examined exits from the state amid the pandemic. The study revealed that fewer people are moving to California since the start of the pandemic in 2020, while the number of residents leaving has gone up significantly.

“At the end of September 2021, entrances to California were 38% lower than at the end of March 2020,” the study noted. “Exits, following a dip early in the pandemic, have rebounded and are now 12% higher than pre-COVID levels—on pace with pre-pandemic trends.”

California native Kathy Kean, 62, moved from Yorba Linda to Spring Ranch, Texas last year with her husband. She said she had noticed an increase in crime in her region.

“It’s not what we remembered our area to be,” Kean told The Epoch Times. “Some of the crime, like the gangs, were getting worse in our area from L.A. and Riverside coming in.”

Homelessness has also been an explosive issue for voters as the November election remains on the horizon. In total, California has the highest number of homeless people in the country, with 161,548 people. Gov. Gavin Newsom allocated an aggressive investment of $2 billion to address homelessness in his 2022 budget.

San Mateo resident and union pipe fitter Michael Bentley, 53, is moving to Colorado in June. He said he was never into politics until a few years ago and would always vote alongside his labor union’s suggestions.

Then, he noticed an increase in homelessness in the Bay Area. He began avoiding downtown due to the crime and squalor he saw on the streets.

“When I first came here, there was wasn’t very much homelessness,” Bentley told The Epoch Times. “Now, I mean, it is freaking crazy. I mean, I avoid San Francisco at all costs. I don’t go downtown, I mean, I feel sorry for these people.”

Others who have left, like former Fontana resident Michael Welter, 63, packed up due to the pandemic restrictions the state imposed. He now resides in Arizona.

“The freedoms that we experienced here, particularly around the pandemic, has been a breath of fresh air, literally, because we don’t wear a mask anymore,” Welter told The Epoch Times. “And you know, we can make decisions for ourselves. I like that I can carry a gun without getting a permit. It’s just freedom—it’s just what America should be.”

All of the subjects interviewed said they only miss the weather in California, while their quality of life has now improved, especially financially. Many had family already in other states they were moving to, or moved with their families. They also uniformly said taxes were one of the top reasons they chose to leave, with some mentioning recent policy disagreements.

“I think the Democrats in legislature and the governor have been emboldened by the failed recall,” Gilliam said. “And they’re going to double down on everything. They think that everybody agrees with what they should be doing. Instead, they’re going to lose the middle class because of it.”

After forming the Leaving California Facebook group, Gilliam also created a “Life After California” group, which focuses on former residents posting about their new lives after moving away. That group now has 79,000 members.