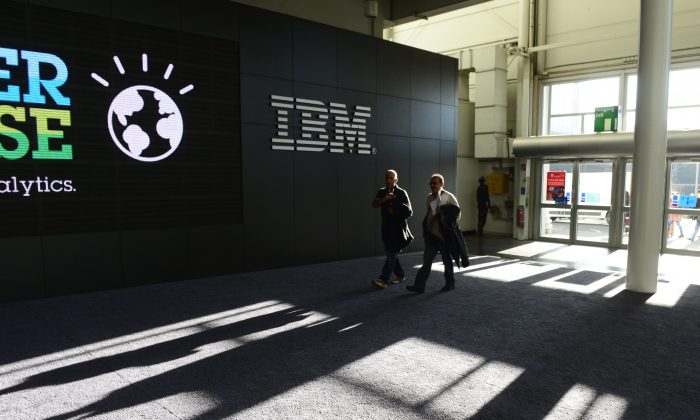 Men pass by the IBM booth on the eve of the start of the 2014 CeBIT technology trade fair on March 9, 2014 in Hanover, central Germany. (John MacDougall/AFP/Getty Images)
China

Amid Hacking Charges, China Retaliates Against US Businesses

China has launched a series of actions in response to charges unsealed by the FBI and U.S. Department of Justice (DOJ) on May 19 against five officers in the Chinese military.

The Chinese regime is pushing its banks to remove IBM server computers and replace them with Chinese products. China’s state-run media began sharply criticizing network equipment manufacturer Cisco Systems. And on the same day, on May 27, the Chinese regime released a report accusing the United States of spying.

The charges by the United States send a message that China’s use of espionage for economic gain will not be tolerated.

China had two responses—one for the general public, and another for private industry.

For the public, they denied the charges and are trying to draw equivalence between U.S. spying for security purposes, and China’s spying for economic gain.

For private industry, the Chinese regime is sending warnings. It started by banning Microsoft’s Windows 8 from use in the Chinese government on May 20, then ordered state-run companies to cut ties with U.S. consulting firms on May 25. The ban on IBM and the smearing of Cisco followed soon after.

The message is simple: If you want to do business, keep quiet.

The recent actions are what U.S. companies feared. Initial reports on how the FBI and DOJ gathered evidence against China’s hackers show that many companies would not step forward, as they feared it would impact their business with China.

The approach being taken by the Chinese regime is the same as what it used against U.S. news media companies. In December 2013, Chinese authorities denied or delayed visas of 24 journalists from The New York Times and Bloomberg as retaliation against a string of investigative reports.

Bloomberg’s decision was to cancel investigative articles about China—particularly one about senior Chinese officials getting jobs at foreign banks, and another about financial ties of top Chinese leaders. The reporter who made Bloomberg’s decisions public, Michael Forsythe, was placed on “unpaid leave.”

The recent steps the Chinese regime is taking against U.S. companies—whether intentionally or not—will cause psychological pressure to make them think twice about coming forward about attacks from China.

A Play on Words

China is facing a crisis in its international image, not only in its disputes with the United States over economic espionage, but also with numerous disputes both internal and external.

The Chinese regime’s strategy for dealing with public pressure has typically been to point somewhere else—often the United States. Its common approach is to draw equivalence between its own shortcoming and the actions of others.

When China gets accused of torturing its own people, it compares it to use of waterboarding by the United States. When it is called out for its crackdown on Tibet and Xinjiang, it points to U.S. wars in Iraq and Afghanistan.

Now that China is being called out very openly for using espionage for economic theft, Chinese leaders are trying to draw equivalence with U.S. spying.

The approach is one that sounds reasonable until you look more carefully at the details.

With torture, waterboarding used by the United States is far different from the Chinese regime using political prisoners as living sources for organ transplants, raping women with electric batons, and using all sorts of other torture methods seemingly out of the Spanish Inquisition.

The U.S. wars to overthrow Saddam Hussein in Iraq and Taliban rule in Afghanistan are far different from Chinese authorities beating and killing unarmed Buddhist monks, or arresting and killing Chinese Muslims who at the very worse may own knives.

In the same light, U.S. spying on Chinese leaders and China’s state-run enterprises for security purposes is qualitatively different from China’s use of espionage for economic gain. Charges against China’s military hackers include stealing intellectual property from foreign businesses and passing intelligence to its state-owned businesses so they can outbid competition.

“Disinformation” is the technical term for the approach China is using to sway public opinion. It is a tactic deployed by the Soviets, often mixing truth, partial truths, and falsehoods to support a false conclusion.

Yet, China is in a funny spot. It was getting by just fine by leveraging public opinion against U.S. spying to deflect criticism. The new U.S. approach, however, seems poised to break this strategy.