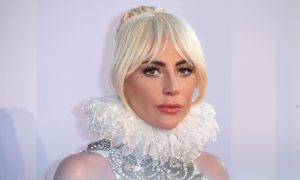 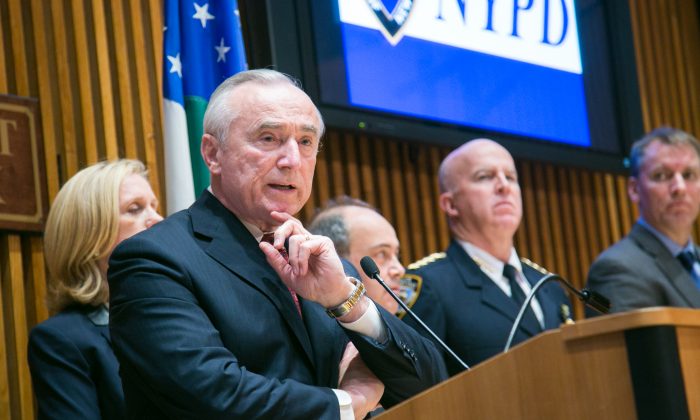 Police Commissioner Bill Bratton at NYPD headquarters on Dec. 18, 2014, at a press conference about an arrest of a few gang members on guns and drug charges. (Benjamin Chasteen/Epoch Times)
News

Gangs have been glamorized in movies such as “West Side Story,” “Gangs of New York,” “Goodfellas,” “American Gangster,” and “Boyz n the Hood.”

But beyond Hollywood, poisonous gang activities are taking place throughout American communities, schools, prisons, shopping malls, and even the military.

According to the FBI, there are some 33,000 violent street gangs, motorcycle gangs, and prison gangs with about 1.4 million members criminally active in America.

Many of these gangs are highly sophisticated and organized, using violence for control.

The National Gang Intelligence Center on the FBI site states:

• Gangs are responsible for about 48 percent of violent crime in most jurisdictions and up to 90 percent in others.
• Gangs are increasingly becoming engaged in alien smuggling, human trafficking, and prostitution as well as counterfeiting, identity theft, and mortgage fraud.
• Family members assist with gang activities during a gang member’s incarceration.
• Gang infiltration of the U.S. military involves at least 53 gangs identified on domestic and international installations.
• Gang members often acquire high-powered, military-style weapons, posing serious threats to law enforcement and communities.
• Gangs encourage members, associates, and relatives to obtain law enforcement, judiciary, or legal employment in order to gather information on rival gangs and law enforcement operations.

To clearly understand the gang threat, let us take a look at one of these gangs, MS-13. The FBI assessment of MS-13 states that it operates in at least 42 states and the District of Columbia. Its membership is about 6,000–10,000 nationwide.

This FBI description captures their brutality: “They have severed the fingers of their rivals with machetes … brutally murdered suspected informants including a 17-year-old pregnant federal witness… attacked law enforcement officers … committed a string of rapes, assaults, break-ins, auto thefts, extortions, and frauds across the United States… been involved with everything from drug and firearms trafficking to prostitution and money laundering … and are sowing violence and discord not just in the United States but around the world.”

A primary defense in protecting youth from gang influence is to prevent initiation at the earliest stage possible. In order to be effective in this regard, the collaborative partnership between the schools, law enforcement, and families is critical.

A wake-up call should ring within a parent, educator, security personnel, or law enforcement official if a child exhibits any of these warning signs:

Gangs are an American reality with members often disenfranchised, marginalized, misguided youth who can themselves be products of dysfunctional families or a cycle of violence, and gang involved parents and family members.

Gang members can also be individuals from oppressed countries where violence and a survival of the fittest mentality by any means is a way of life.

The desperate allurement of American youth to the gang culture can be expressive of a need for recognition, protection, and belonging.

America’s response must be exercised through not only the criminal justice system where there must be consequences for illegal activity but also through a collaboration of law enforcement, private security, family, community, faith-based partners, and educational partners.

Prevention of gang indoctrination and involvement must begin with awareness at the earliest years of educational formation in the home and school. America must make positive alternatives attractive to counter the false allurement of the gang culture that ends only in disillusionment, violence, prison, or even death.