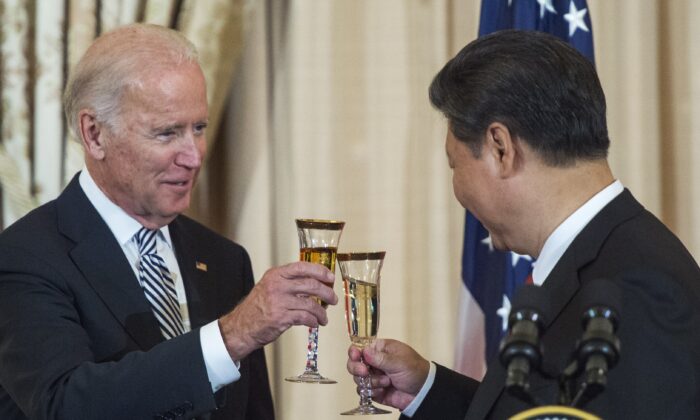 Then-Vice President Joe Biden and Chinese leader Xi Jinping toast during a State Luncheon for China hosted by U.S. Secretary of State John Kerry at the Department of State in Washington on Sept. 25, 2015. (Paul J. Richards/AFP via Getty Images)
Viewpoints

America’s Future and the China Model

Evidence is mounting that the virus at the heart of the pandemic came from a virology lab in Wuhan, China, that lies by the regime in Beijing fueled its spread, and that China hoarded supplies and equipment critical for protecting and treating the public.

Further evidence shows that the World Health Organization (WHO)—a U.N. agency—was fully complicit in all of these actions.

Yet you’d never know it if you listened to America’s mainstream media or the leadership of the Democratic Party. Not only do they object to conventional labeling such as “Wuhan Virus,” “China Virus,” or “CCP Virus,” but they insist that all talk of China’s culpability is little more than racist conspiracy theories. They repeatedly parrot Chinese Communist Party propaganda and run to the defense of the WHO.

Worse, many of them seem to admire the ease and efficiency with which China can simply shut down cities, restart economies, and move people and resources around the country. They compliment China for sending (frequently defective) material and personnel abroad, and for cooperating with the global community.

It’s easy enough to shrug it all off as mere politics. To many Democrats, nothing is more important than defeating President Donald Trump, and if winning November’s election requires burnishing the credentials of China’s communists, it’s a price worth paying.

Given that the winner of November’s election will determine how the United States rebuilds its economy, its society, and its regulatory codes in the wake of this pandemic, it’s worth taking a moment to understand what that envy portends.

In the wake of the Cold War, America’s intelligentsia proclaimed an “End of History.” In their telling, liberal democracy established itself as the only viable way to organize society and run a country.  They could hardly have been more wrong.

The traditional American Model of constitutional republicanism espouses individual rights and limited government. It values people as individuals, frees them to make their own decisions, and holds them responsible for the consequences of those decisions. Government’s job is to provide security, basic infrastructure, and enabling mechanisms, and at times to cushion catastrophic outcomes for its citizens.  The international order promotes strong, independent sovereigns operating in accord with their own distinct cultural traditions.

The communist Chinese Model of pragmatic authoritarianism believes in the power of a centralized bureaucracy. The system empowers bureaucrats to carve out and monopolize entire spheres of decision-making, allegedly for the common good. Within those spheres, the central authority may restrict and curtail individual choice, behavior, speech, and belief—and enforce those restrictions as it sees fit. Citizens may enjoy some freedoms outside the monopolized areas, but since the government can claim new monopolies at any time, those freedoms are effectively government grants rather than human rights. The international order reflects the will of the strong, while imposing rules on the weak.

Today’s American left seeks a soft implementation of the Chinese Model. During the Obama years, every problem called for increased centralization and regulation. Parts of the Justice Department, the Internal Revenue Service, the FBI, the CIA, and the Department of Education engaged in political favoritism, domestic spying, and the suppression of due process as needed to enforce bureaucratic diktats.

Every one of Democratic presidential candidate Joe Biden’s proposals for dealing with the CCP virus, commonly known as the novel coronavirus, involves increased bureaucratization and coordination with international agencies. Democratic governors and mayors around the country have seized the opportunity to suppress religious rights, gun rights, the right to protest, and even the right to engage in a disfavored activity while social distancing in a public space.

The media claims that Trump is exhibiting authoritarian tendencies, but its substantive critiques fault him for giving states and citizens too much latitude—in short, for deregulating and devolving rather than centralizing and bureaucratizing.

The alignment of the CCP, the WHO, the American media, and the Democrats is hardly a coincidence.  They share an ideological preference for centralized bureaucracy and enforcement over individual freedom and personal responsibility.

Biden, who represents the moderate wing of his party, has a long history of praising the Chinese regime. While he might wish that the regime eased up on its more brutal and draconian enforcement practices, he clearly admires China’s achievements and its efficiency. He—and the party he leads—would like an America that looks a lot more like China. With the CCP-initiated pandemic having cleared the decks for a genuine restructuring of America’s regulatory regimes, a Democratic victory in November will ensure that they get it.

Bruce Abramson
Follow
Bruce Abramson, Ph.D., J.D., is a senior fellow and director of the American Center for Education and Knowledge (ACEK). He is the author of five books, most recently “The New Civil War: Exposing Elites, Fighting Utopian Leftism, and Restoring America” (RealClear Publishing, 2021).