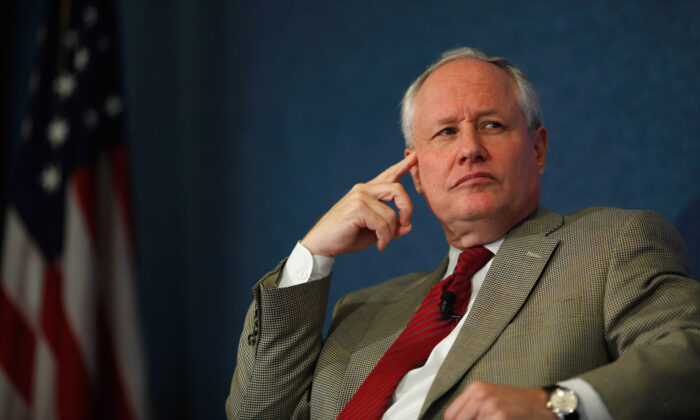 Writing in the shadow of the Iowa Caucus fiasco, I am taking a risk in what I am going to say, but the handwriting seems to be on the proverbial wall. The United States will soon have three, not two, major political parties. The days of the two-party system, as we know it, are numbered.
You don’t have to be any kind of genius to see this. The continuing rise of Bernie Sanders—after being denied the 2016 nomination on dubious grounds—means we are likely on the road to having the most left-wing candidate in the history of the Democratic Party and are also well into the almost-certain break-up of that party.

Note the “almost.” I have a caveat, which I will explain later, but first, allow me to describe the three parties, which are becoming relatively obvious at this point.

One is Trump’s Republican Party. Call them the Trumpetarians. We can see them roughly once a week at one of his rallies, so we know who they are—and they are enthusiastic, to say the least.

Two is the Sanders- or AOC-led socialist party. (Elizabeth Warren has gone back to the reservation.) Call them the Bolivarians because of Sanders’s high-esteem for the likes of Venezuela’s Hugo Chavez, Nicaragua’s Daniel Ortega, and other Latin American autarchs only slightly less ruthless than El Ché. (They may call themselves democratic socialists, but then, most socialists did, at the beginning.)

The Bolivarian rank-and-file, aka Bernie Bros., may be clueless about what they’re getting into, but they are, nevertheless, also absolutely enthusiastic.

Three is the old guard Democratic Party plus the NeverTrumpers (all fifty of them, including Bill Kristol). Call this group the Deep Staters.

They are not enthusiastic.

In fact, as of now, the Deep Staters are in a panic because they are being outstripped by the other two parties. This is why Rahm Emanuel—a Deep Stater par excellence—wrote a plaintive op-ed for The Wall Street Journal trying to convince Sanders supporters that they all (all Democrats, that is) wanted the same thing.

The Bolivarians know better. They’ve heard this song before, particularly in 2016.

Making matters worse for the Deep Staters is that they know they have to change horses. Their initial steed—Joe Biden—was flawed in the extreme. (Probably they knew this, but, as they say, you go to war with the army you have.) Biden is on the near side of senility and the far, far side of corruption, and everyone is starting to know it.

Fortunately, there’s a new steed, and one with plenty of money, who has ridden to the rescue—Michael Bloomberg. It’s immaterial that Bloomberg has far more in common with Trump than he does with Sanders—unless you call raising the cooperate tax to 28 percent (which would probably be whittled down to 24 percent or so anyway) from 21 percent a significant difference.

Sanders wants to do away with all the corporations he can by turning them into government utilities. Michael and Donald are capitalists to the nth degree, even if Bloomberg wants us to lay off the economy-sized pop.

The Democratic National Committee has already changed the rules for Bloomberg to get him on the debate. If they go further, reinstating the power of the super delegates at their convention to block Sanders and install Bloomberg, watch out for an explosion like we haven’t seen since Chicago 1968. But this one will take place inside the convention hall.

Sanders, for the Deep Staters, is ultimately a bigger problem than Trump. They should have impeached him, not Trump. Sanders—should he win the general or even come close, winning the popular vote, for instance—means the end of the Democratic Party as we know it, with America’s oldest political party splitting into two.

Ironically … and here comes the caveat to which I referred … the Deep Staters’ (i.e. traditional Democrats) only hope is Trump. Should Trump defeat Sanders really badly in the general election, McGovern badly or something similar—in other words, a rout—the Bolivarians will have to climb back on their old nag and ride back to Venezuela to lick their wounds, not to be seen hereabouts for a long time. The Democratic Party can go back to its old games.

Anything can happen, of course, but is the Trump blow-out a likely scenario? As Instapundit Glenn Reynolds would say, “Analysis: yes.”

Epoch Times senior political analyst Roger L. Simon is the author, most recently, of “The GOAT.”