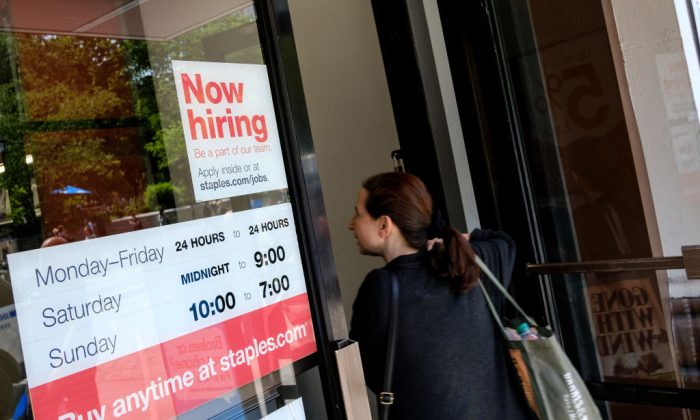 A 'now hiring' sign is displayed on the front entrance to a Staples store in New York City, June 2, 2017. (Drew Angerer/Getty Images)
Economy

Americans remain quite positive about the job market, reflecting strong data on the U.S. economy in general and on employment in particular.

According to a poll conducted by Gallup in June, Americans are positive, with 65 percent saying that it is a good time to find a quality job, similar to 67 percent in May.

The May and June measures are the highest readings in Gallup’s 17-year history of tracking Americans’ views of the jobs market.

Another Gallup survey showed that fewer Americans mentioned the economy as the nation’s top problem. A growing number of citizens now identify immigration as the most important problem facing the country.

Republicans are more positive than Democrats about the employment situation, reflecting a partisan gap in views.

Eighty-five percent of Republicans say it is a good time to find a quality job, as opposed to 50 percent of Democrats, according to the poll.

“During the Barack Obama years, Democrats were more optimistic about the job market than Republicans,” stated a Gallup report.

Under Obama’s presidency, views of the job market plummeted to an all-time low of 8 percent in 2009 and again in 2011, amid the financial meltdown and high unemployment.

Optimism about the ability to find a quality job began to surge after Donald Trump took office, according to Gallup.

U.S. job openings surged to record-high levels this year, with vacancies increasingly exceeding the number of unemployed workers. And the unemployment rate fell to 3.8 percent in May, the lowest in 18 years.

While a strong jobs market benefits American workers, companies are having trouble finding suitable workers due to a growing skills gap.

The skills shortage is a broad issue that affects many U.S. industries. The Trump administration has several proposals aimed at fixing the problem, which include reforming education and workforce development programs.