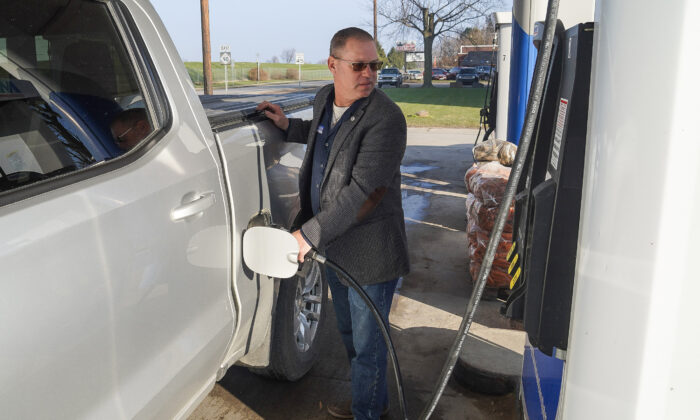 Joseph M. Hanneman
Joseph M. Hanneman is a reporter for The Epoch Times with a focus on the Jan. 6 U.S. Capitol incursion and its aftermath; and general news in the State of Wisconsin. His work over a nearly 40-year career has appeared in Catholic World Report, the Racine Journal Times, the Wisconsin State Journal and the Chicago Tribune. Reach him at: joseph.hanneman@epochtimes.us
View profile
Follow
, Jackson Elliott

Jackson Elliott
Reporter
Jackson Elliott reports on small-town America for The Epoch Times. He learned to write and seek truth at Northwestern University. He believes that the most important actions are small and that as Dostoevsky says, everyone is responsible for everyone and for everything. When he isn’t writing, he enjoys running, reading, and spending time with friends. Contact Jackson by emailing jackson.elliott@epochtimes.us
View profile
Follow
, Steven Kovac

Steven Kovac
Reporter
Steven Kovac reports for the National Team from Michigan. He is a former small businessman, local elected official, and conservative political activist. Steven is an ordained minister of the Gospel. He and his wife of 33 years have two grown children. He can be reached at steven.kovac@epochtimes.us
View profile
Follow
and Michael Sakal

Americans are feeling the economic pain as consumer prices rose nearly 7 percent over the past year, a reality that is causing tough choices and belt-tightening at home as a hedge against the higher cost of living.

The jump in prices of gas, food, and durable goods has changed the travel plans and Christmas shopping habits of the Alexander family of Carsonville, Mich.

Greg Alexander, 53, commutes 30 miles a day from his farm in rural Sanilac County to his job as director of utilities and community development in the small farming town of Croswell.

He was out last on Dec. 10 to buy a few groceries for dinner and fill his pickup with gas at J & D Market in Croswell.

“Under Trump gas was way less than $2 a gallon. Today it’s over $3. We’re cutting back on discretionary travel,” Alexander said.

“Bulk purchases of agricultural-use diesel were less than a dollar a gallon in 2019. Now it’s more than triple that. Add the cost of freight and no wonder grocery prices are going up.”

The national average for a gallon of regular unleaded gasoline dropped a slight 2 cents in the past week, to $3.32 on Dec. 14, the American Automobile Association (AAA) reported. The retail price of gasoline is still 54 percent higher than the same period in 2020, according to the AAA. California had the highest average gas price on Dec. 14, at $4.675 per gallon, while Oklahoma registered the lowest, at $2.894.

“Food prices are up 25 percent, even in big-lot purchases. Things like pork butts and beef,” Alexander, who is active in his local Knights of Columbus charity food distribution program, said. “Area farmers can’t get their animals butchered for lack of personnel at the processing plant.”

Personal Christmas shopping will be different for Alexander this year.

“My gifts will be homemade on my own land. Things like maple syrup, honey, and venison. If I need to shop for a gift, I’m going to buy it locally. Made in America.”

Alexander said he and Patty, his wife of 30 years, are getting by and maybe even getting ahead a little.

“We can make it because we are double-income and our three kids are grown. When we look at today’s costs for kid’s food, clothes, shoes, hockey uniforms, and the like, we’d really have to struggle if they were still in the house,” Alexander said.

“The problem is too many people are sitting home collecting ‘free’ money. And the vaccination mandate is a big factor aggravating the labor shortage that’s pushing prices higher.”

Alexander said his heat-pump system has saved his family from the bite of rising home heating costs.

Deb Graff is skilled at managing a tight budget, but recent increases in the cost of essentials like food and utilities have her worried about sustaining her new mortgage.

She and her son Joe pooled resources in 2019 to buy a home in Windsor, Wis., just outside of Madison. He works full time and she relies on modest Social Security disability income. Things were tight even before inflation hit.

“It’s a big pinch. I need to get my teeth fixed really bad and I can’t do that,” Graff, 66, told The Epoch Times. “I have to be really careful on what we buy. We don’t buy a lot of the junk foods, we don’t buy chips, any of that, like we used to. We just don’t have the money to do that.”

A recent $30 jump in the monthly electric bill was an unwelcome surprise. Fear that inflation could bring longer-term price increases keeps her up at night.

Her son needs to find health insurance. Property taxes are up — and so is worry.

The increased cost of living translates into less confident consumers who are less able—and less willing—to spend. The Conference Board Consumer Confidence Index was down in November after rising in October.

“Concerns about rising prices—and, to a lesser degree, the Delta variant—were the primary drivers of the slight decline in confidence,” Lynn Franco, senior director of economic indicators at The Conference Board, said in a statement. “Meanwhile, the proportion of consumers planning to purchase homes, automobiles, and major appliances over the next six months decreased.”

“I worry every day. I worry how long we are going to be able to keep this place. Every day you’re in turmoil. Every day,” Graff said.

“We know he has to have health insurance. He has to have it in case something would happen, so we don’t lose the house,” she said. “I do see things getting a lot tighter because that’s going to be money out of our budget.”

Graff was used to doing whatever it takes to make ends meet. She worked for the State of Wisconsin and later did jobs in landscaping and floral design.

“I was in finance for many years. I helped people with their finances and helped them budget their incomes, so it’s not anything new to me,” Graff said. “But I never dreamed I would be in this kind of a position.”

Graff hopes her hobby of raising honeybees will one day generate income to supplement the family budget. “If we split it, it might turn out to be another couple hundred bucks a month, if that. And that’s years down the road. Right now it’s a labor of love,” she said.

For Rossville, Ga., resident Paul, there will be no skimping on Christmas presents this year, he told The Epoch Times.

Wearing a pro-Second Amendment hat while grocery shopping at Rossville’s Food City, Paul said, “If I have to take loans out or whatever, I’m gonna give the Christmas gifts.”

Even so, 2021 inflation has made life expensive for Paul, his wife, children, and grandchildren, he said. Working as a maintenance mechanic, he gives some support to the next generation of his family. The rising costs have been “terrible,” he said.

Rising food and gasoline expenses mean Paul and his family have to cut back on doing the things they want to do, he said. Land taxes and electricity have also gone up. When everything’s more expensive, even small cost increases add up.

Now, the money is giving Paul’s family stay-at-home orders. “You stay home more because you don’t have that extra money,” he said. “There’s not that much freedom.”

Paul placed the blame for the rising prices squarely on President Joe Biden.

‘I Have to Rely on Living on My Tips’

At 38, Chandra Bookwalter isn’t doing as well financially as she used to.

A full-time waitress and bartender at Sour Mugs in the rural town of West Milton, Ohio, north of Dayton, for the last 20 years, Bookwalter has noticed much less money on her paycheck. Bookwalter said she pays more in taxes with hopes she gets a better return.

Is she making sacrifices during the Christmas season?

“Hell, I’ve been making sacrifices since this COVID thing hit,” said Bookwalter, who lives with her boyfriend and his two teenage sons. “My weekly check is now $15—for 40 hours. It’s just insane.

Bookwalter makes a little more than minimum wage. The bar’s owner wanted to keep workers after customers returned to the popular eatery when the virus restrictions were lifted.

To save money, Bookwalter purchases items on the BidFTA auction website because it often includes bulk. And for Christmas gifts?

“I’m not buying very much this year,” she said. “Things are way too expensive. I just don’t have the money. The cost of gas is high, and we’re dealing with too much inflation.”

At Christmas, ‘Things Are a Lot Tighter’

What a difference a year has made for Raymond Ramirez. Although he’s grateful for his family—and to be living with his grandmother—Ramirez will cut back on Christmas, and pretty much everything else, to make ends meet.

The higher prices for gasoline and food are especially painful.

“It’s killing us,” said Ramirez, a 20-year-old married father with an 18-month-old son. Because of his wife’s pregnancy, she can’t work, so he works two full-time jobs.

Ramirez works 7 a.m. to 3 p.m. in shipping and receiving for a local factory, earning $14.50 an hour. After resting for about an hour, he then works 4 p.m. to midnight as a DoorDash driver.

This year for Christmas, Ramirez said he’s only buying gifts for two people due to inflation, and they are smaller and less expensive gifts at that. Last year, he bought 10 gifts for more people.

“This Christmas, things are a lot tighter,” Ramirez said. “Thankfully, I only have to buy for two people, because now I’m struggling.”

He lost his apartment last year when he caught the CCP (Chinese Communist Party) virus when he was working at Walmart. He had to quit that job because he kept getting sick after returning to work.

“It’s hard to get everything done,” Ramirez said. “The cost of living is going up too high, and we can’t keep up with it.”