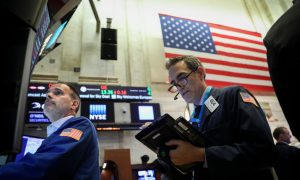 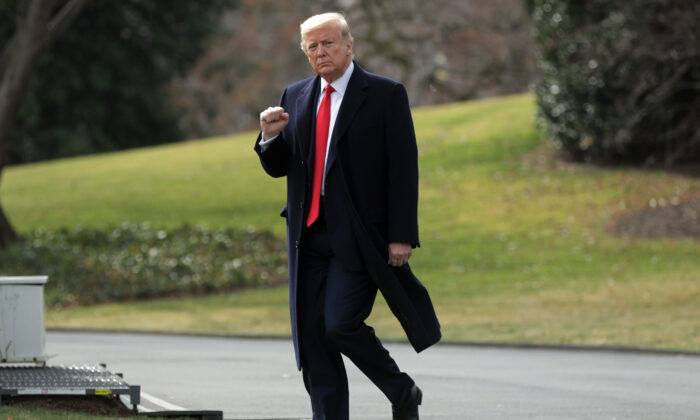 President Donald Trump walks toward Marine One on the South Lawn prior to his departure from the White House in Washington on Jan. 30, 2020. (Alex Wong/Getty Images)
US News

Americans say they are more satisfied with the economy, national security, and several other key issues now than when President Donald Trump took office in January 2017, according to a new Gallup poll.

The polling data, released on Jan. 27, found that public satisfaction with the nation’s economy, security from terrorism, military strength, and the state of race relations rose by double-digits.

Satisfaction with military strength and preparedness rose 15 percentage points to 81 percent from 66 percent, while Americans are more upbeat about the state of race relations, showing an increase to 36 percent from 22 percent, amid falling African American unemployment rates.

Meanwhile, respondents to the survey indicated less satisfaction in several areas, including the quality of the environment, which fell to 46 percent from 52 percent; the level of immigration into the country, to 35 percent from 41 percent; and the nation’s policies regarding abortion, which fell to 32 percent from 39 percent.

In another set of data released on Jan. 24, the pollsters found that 41 percent of Americans are satisfied with the way things are in the country, while 58 percent are dissatisfied. That level of satisfaction is up from 29 percent in 2017 and is the highest since 2005. The highest satisfaction level Gallup has ever recorded was 71 percent in February 1999.

One reason for drops in public satisfaction in recent years, Gallup suggested, is that respondents who identify with a particular party that doesn’t occupy the White House seem reluctant to express satisfaction with how things are going in the country.

Going into the 2020 election year, the poll could give some indications of public opinion on presidential job approval, satisfaction with the direction of the country, and economic confidence.

The Mood of the Nation poll was conducted by telephone between Jan. 2 and Jan. 15, with a random sample of 1,014 Americans over the age of 18 across the country. The margin of error for the poll is plus or minus 4 percentage points.