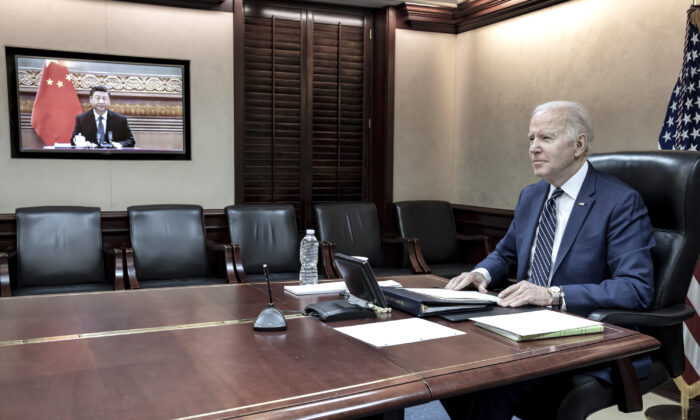 The Chinese regime poses the biggest ever challenge to the United States, and American leaders have failed to repel it effectively and strongly, according to historian Kevin Roberts.

“In the entire history of the United States, there has never been an adversary that poses a greater threat to the American way of life, and therefore, to freedom in the world, than China,” Roberts, president of Washington-based conservative think tank Heritage Foundation, recently told EpochTV’s “China Insider” program.

“The Chinese Communist Party is building through their totalitarian evil regime, a very serious adversarial regime to the United States,” he added.

In Roberts’ view, the American political class has failed to adequately respond to the harm posed by the Chinese Communist Party. He said the Biden administration has not shown strong leadership in tackling the regime’s various threats.

Meanwhile, the White House has shown missteps in other areas of foreign policy, including its chaotic withdrawal from Afghanistan, and its refusal to provide jets to Ukraine that could have significantly aided the beleaguered country, according to Roberts.

Incidents like these would lead Chinese leader Xi Jinping to conclude that “the American state is inept and weak,” Roberts said.

Further, American leaders from both parties, according to him, hold the notion that conciliation with the regime is the best approach.

This kind of attitude resembles that held by British Prime Minister Arthur Neville Chamberlain, best known for his appeasement of Adolf Hitler.

Roberts said that the failure of the British leader to take a stand against Hitler should be the “greatest lesson in modern history” for the United States, adding that Washington can ill-afford to make the same mistake with respect to the Chinese Communist Party (CCP).

Part of the danger posed by the CCP results from its ability to infiltrate American society through extensive business connections. “China has gotten America to look more like China,” he said.

In order to deter the Chinese regime, the U.S. leadership should possess the same resolve as that held by President Ronald Reagan who fought strongly against the Soviet Union to end the Cold War, according to Roberts.

“President Reagan had the political courage against all of the advice he was getting from the other side, and the appeasers in the United Nations, to stare down the Soviet and say, ‘Tear down that wall,” he said.

“If we don’t engage in these great battles about moral clarity, about freedom, then we probably shouldn’t even exist as a country ourselves.”