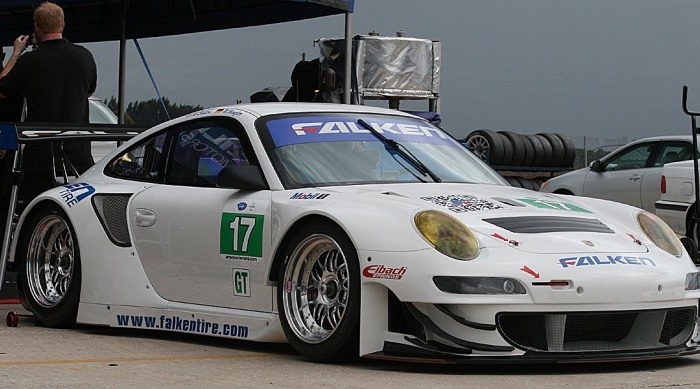 The Lites and Porsche Cup cars were just testing—though, as with all testing when race drivers are involved, everyone tried to be faster than everyone else.

The USF 2000 drivers tested in the morning. In the afternoon they got to qualify and race in the first of three races scheduled for the first two days.

Tuesday will be more testing, and the final two USF 2000 races. Wednesday and Thursday, the ALMS big guns unlimber—though many teams already had their transporters on site, and a few cars had already been unloaded Monday afternoon.

Level 5 had a pair of HPD-ARX03s, one with 2011 bodywork and the other with partial 2012 panels. Falken Tire had a GT Porsche parked outside its pavilion, and later had it inside the tent for preliminary setup. [etssp 507]

The weather was excellent—Florida in the winter, what else? The morning started hazy then cleared. Predicted thunderstorms blew in at lunchtime and obligingly departed in time for the planned resumption of racing action, leaving the track damp but drivable. The rest of the afternoon was cloudy and cool—cool as in “not sweating,” as opposed to “wear a sweater” cool. [etssp 508]

The Winter Test is a worthwhile way to spend a day or two for anyone who can make it. Tickets are $10 at the gate—a great price to see the latest ALMS (and a few WEC) challengers going through their paces for the first time. [etssp 509]