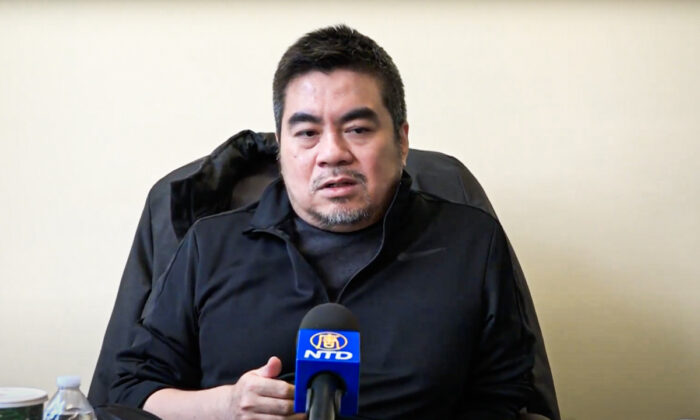 In 2017, Cheng San, a Taiwanese American game designer, found himself at the pointy end of the Chinese regime’s crusade against gun ownership.

He was sentenced to three years in jail for buying toy guns online—deemed an illegal act by authorities applying the regime’s harsh and broadly defined gun-control laws.

Now back in the United States after serving his sentence, Cheng wants justice.

Cheng, a 47-year-old Taiwanese American, was the CEO of Keyloft Inc., a New York-based company that designed game apps for smartphones. While in Beijing in April 2016, his firm started working on a first-person shooter video game app.

To help his team optimize their designs, Cheng and his employees, over the course of the six-month project, bought more than 60 replica guns on Taobao, one of China’s most popular shopping platforms, owned by tech giant Alibaba. None of the toy guns were lethal, according to the listed product descriptions, and each cost less than $20.

Cheng couldn’t have expected what would happen next.

In June 2017, police showed up at Cheng’s Beijing residence and arrested him on charges of holding guns illegally. A total of 137 people, employees and their family members, were arrested in the same case, Cheng said at a Dec. 9 press conference in Flushing, New York.

China has some of the world’s strictest gun laws, which prohibit people from purchasing or owning any gun. What constitutes an illegal gun is broadly defined under its laws and regulations. The police asserted that nine of the purchased replicas had met the standard of an illegal gun.

When Cheng was arrested, according to his account given at the press conference, he saw an officer holding a thick stack of documents showing all the records of the replica gun purchases. As someone familiar with data systems, Cheng immediately realized such customers’ personal information was owned and held by Alibaba, and the only way that police could have obtained it was if the company released it to them.

Cheng questioned the rationale of the arrest, pointing out that if the prop guns had violated the law, Alibaba and Taobao shouldn’t have been permitted to sell them in the first place. If this had happened in the United States, in the case of a customer buying illegal goods at Amazon, he argued, law enforcement agencies would take action against Amazon rather than the shoppers.

Cheng pleaded not guilty, but he was convicted and sentenced to three years in prison. At his insistence, the verdict included a reference that all the “guns” involved were bought online at Taobao.

While detained, to Cheng’s surprise, he met about two dozen others who were similarly arrested for illegal gun possession.

Cheng, now residing in New Jersey, accuses Alibaba of misusing customers’ information and abetting the police to wrongly persecute, which, in his opinion, amounts to violations of human rights.

He said that a police officer told him that Alibaba got a big bonus from the police whenever it released customers’ information. It made him believe, he told the press, that Alibaba, driven by money, has set traps for buyers.

“Can Amazon promote and sell illegal goods to implicate its customers?” Cheng said.

He showed a screenshot of web pages of AliExpress, another e-commerce site owned by Alibaba, promoting a variety of illicit items, from counterfeit U.S. banknotes and coins to fake vaccination cards, and FBI or New York Police Department badges.

Taobao, one of China’s largest shopping platforms, has for years attracted scrutiny for selling pirated and counterfeit goods. The U.S. trade representative has placed the e-commerce giant on its annual list of “notorious markets” for the past five years.

While in China, Cheng and his employees hired lawyers to try to hold Alibaba to account, only to find that they couldn’t even file a case against the tech giant, which at the time was one of China’s most powerful companies, with deep connections to the Chinese Communist Party, he said. Some of his employees pursuing the case were also detained, and an Alibaba lawyer threatened to accuse them of harassment.

Alibaba officials didn’t respond to a request for comment by press time.

Despite being jailed for three years, Cheng says he’s luckier than his Chinese employees, most of whom had much longer sentences, calculated based on how many replica guns they had bought. His U.S. citizenship aside, Cheng believes that his contention that Taobao was the culprit helped him get a shorter sentence.

According to Cheng, a Chinese citizen unrelated to his case was sentenced to life imprisonment for buying 49 toy samurai swords online.

Cheng’s experience took a severe toll on him. While in jail, he attempted suicide three times. The company he founded, which, at one point, he was looking to take public, went bankrupt as he languished in detention.

Now, more than one year after his release, Cheng still has nightmares every night and often can’t figure out where he is upon waking up.

“When I fall asleep, I go back to the jail,” he said. “I looked like a lunatic right after I came back to America. I kept wandering at home anxiously.”

Cheng said he’s on medication for his post-traumatic stress disorder and is being treated by four psychiatrists.

Given that Taobao is an international shopping platform, Cheng is concerned that Alibaba is misusing its vast databases of customers’ personal information from all over the world. According to an Alexa ranking, Taobao was the eighth-most-visited website globally in 2021.

Cheng is urging that governments strengthen supervision of Alibaba and Taobao. Meanwhile, he calls on Apple to stop running Taobao ads and urges shoppers to delete Taobao apps.

“A loving dad who bought a toy gun for his kid’s birthday may end up in jail for many years. It has harmed so many families,” Cheng said.

“It must be stopped.”