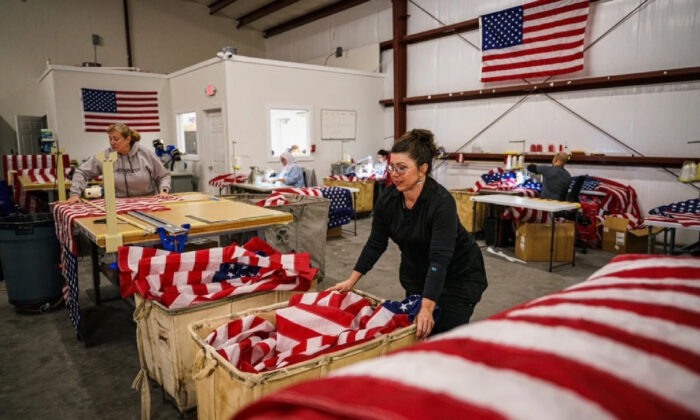 American Flags, Born in the USA

CHARLESTON, South Carolina—Inside the Allegiance Flag Company’s facilities, it is hard not to notice that the employees making the flags reflect the beauty and diversity that has always been the promise and purpose of our country. They use their skills to make American flags in America, perfectly encapsulating the three young owners’ mission in starting this company.

In short, they set out to make a flag where every stitch, hem, and thread would be made in the United States. And they’ve done it.

Owners Katie and Wes Lyon and their childhood friend Max Berry said it was an idea that came from lots of late-night conversations. They wanted to be their own bosses, and they realized that most flags in big-box stores and local hardware stores are made in China—and not very well made, at that.

From the small flags you wave at parades to the ones that hang from telephone poles in small towns across the country to the ones you and your neighbors hang from your homes, there are 150 million American flags sold in the United States every year. Of that number, nearly $7 million of those sales go to other countries, in particular China, according to WalletHub.

That includes flags flown at the Capitol. This led a bipartisan group of senators to introduce a bill requiring that the federal government buy only American flags that are produced entirely on U.S. soil.

The federal government can currently purchase flags that contain 50 percent American-made materials, according to a press release from Sen. Joe Manchin (D-W.Va.).

Manchin said in his release that in 2017, the United States imported 10 million American flags. All but 50,000 of those came from China. Other sponsors of the bill included Sens. Sherrod Brown (D-Ohio), Susan Collins (R-Maine), and Rick Scott (R-Fla.).

Wes Lyon said the origins of Allegiance Flag Company began at the University of South Carolina, where he met his wife, Katie. The two settled here after college. Berry came back into the picture while attending business school with Wes Lyon at the College of Charleston. “I told Katie one day when I came home from class, I met this really cool guy that I really like a lot who’s actually one of my favorite people in the class, Max Berry,” he said. “And she’s like, ‘Whoa, Max Berry? I went to middle school with him!’”

That serendipitous moment led to lots of long talks between the three of them about what they wanted to do with their lives and their careers. All three were searching for a greater purpose while pursuing that American dream of running their own business.

“We all bought houses around the same time, and we live really close to each other,” Berry said. “And one of the first things that we did when we bought our houses was buy an American flag to hang off of our porch.”

It was Wes Lyon who first noticed the shoddy quality of the flags. “They just seemed poorly made,” Berry said. “Then there was just the general confusion about, what size did you need? How do you attach a flag to a flagpole in general? Is it a sleeve? Is it a grommet kind of thing? You don’t know. And then, second of all, after we bought our flags—I know I bought mine on Amazon. I think Wes and Katie might have bought theirs at a big-box hardware store like Lowe’s. And it just seemed really cheap.”

After tons of research, Katie Lyon said they soon discovered how many American flags in stores across the country were made in China. “It was a bane to us because if there is one product that exists that deserves to be made in America, it is an American flag,” she said.

Eventually, all three left the safety net of their corporate jobs and chased their dream. It is the frontier ethos that has made America great for generations—one cannot find opportunity without risk.

“Heck, it is still scary,” Berry said. “We’re certainly more successful now than we were three years ago, but it’s still a roller coaster every day.” The year’s work is not consistent in its flow: January is a very slow month in the flag business, while June and July are very busy months. There is no backup if they can’t keep up in summer.

COVID-19 obviously posed a major challenge. “People were stuck indoors, and while there were some stores who were open, they were only selling essential items,” Katie Lyon said. “American flags were actually taped off at that time. A lot of local mom and pop kind of stores, they were all closed.”

As a consequence, e-commerce boomed at the same time that there was a push for American pride. “I think in the beginning, a lot of the messaging was we were all in this together—people really were proud of flying the American flag, maybe some that had not purchased a flag in a while,” she said. “So, I think a lot of the stay-at-home orders, not able to purchase it at stores, huge patriotic push, and then while all that was going on in our country, we had really nailed things internally.”

Wes Lyon explained that this happened at the same time they had figured out how to source and make the flags. “We got the embroidery of our star fields figured out, we got our stitching figured out, we got sophisticated, and we were able to lower our price to something a little more digestible,” he said.

It was then they finally figured out what their company was all about.

“When we first launched Allegiance, we’re like, ‘We’re an American flag for everybody,’” she said. “And we really didn’t know what that meant. I think that’s such a broad statement, and today we still are what we wanted to be in the beginning.”

They went from a garage operation to the 25 employees you see working on these incredibly beautiful American flags when you walk in their doors today. They are all made by the seamstresses—true artisans who take pride in making flags that will adorn homes across America.

The American flag stands for something. Even in a divided nation, it means something to people on all sides of the aisle. We are all part of something bigger than ourselves individually and our political tribes. All the more for an American flag actually made in America.