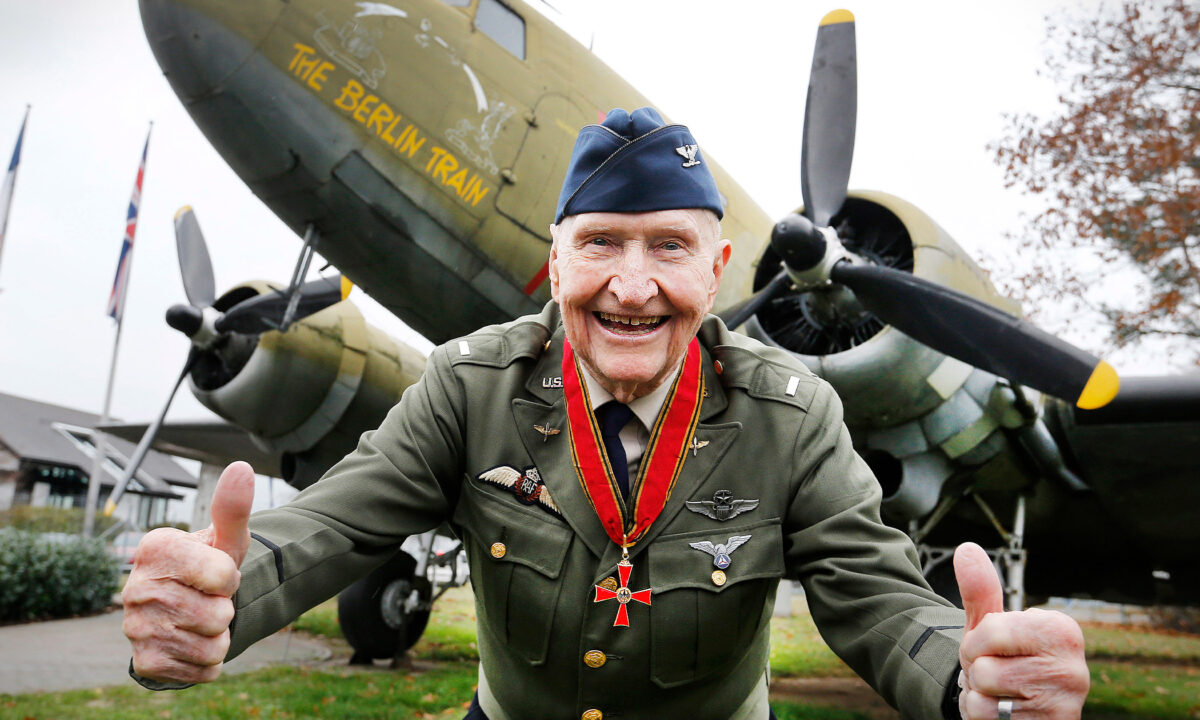 BY The Associated Press TIMEFebruary 22, 2022 PRINT

U.S. military pilot Gail S. Halvorsen—known as the “Candy Bomber” for his candy airdrops during the Berlin airlift after World War II ended—has died at age 101.

Halvorsen died Wednesday following a brief illness in his home state of Utah, surrounded by most of his children, James Stewart, the director of the Gail S. Halvorsen Aviation Education Foundation, said Thursday.

Halvorsen was beloved and venerated in Berlin, which he last visited in 2019 when the city celebrated the 70th anniversary of the day the Soviets lifted their post-World War II blockade cutting off supplies to West Berlin with a big party at the former Tempelhof airport in the German capital.

Utah Governor Spencer Cox also praised Halvorsen, who was born in Salt Lake City but grew up on farms before getting his pilot’s license.

“I know he’s up there, handing out candy behind the pearly gates somewhere,” he said.

After the United States entered World War II following the attack on Pearl Harbor, Halvorsen trained as a fighter pilot and served as a transport pilot in the south Atlantic during World War II before flying food and other supplies to West Berlin as part of the airlift.

According to his account on the foundation’s website, Halvorsen had mixed feelings about the mission to help the United States’ former enemy after losing friends during the war.

But his attitude changed, and his new mission was launched, after meeting a group of children behind a fence at Templehof airport.

He offered them the two pieces of gum that he had, broken in half, and was touched to see those who got the gum sharing pieces of the wrapper with the other children, who smelled the paper. He promised to drop enough for all of them the following day as he flew, wiggling the wings of his plane as he flew over the airport, Halvorsen recalled.

He started doing so regularly, using his own candy ration, with handkerchiefs as parachutes to carry them to the ground. Soon, other pilots and crews joined in what would be dubbed “Operation Little Vittles.”

After an Associated Press story appeared under the headline “Lollipop Bomber Flies Over Berlin,” a wave of candy and handkerchief donations followed.

The airlift began on June 26, 1948, in an ambitious plan to feed and supply West Berlin after the Soviets—one of the four occupying powers of a divided Berlin after World War II—blockaded the city in an attempt to squeeze the U.S., Britain, and France out of the enclave within Soviet-occupied eastern Germany.

Finally, on May 12, 1949, the Soviets realized the blockade was futile and lifted their barricades. The airlift continued for several more months, however, as a precaution in case the Soviets changed their minds.

Memories in Germany of American soldiers handing out candy, chewing gum, or fresh oranges are still omnipresent—especially for the older generation born during or right after the war.

Many fondly remember eating their first candy and fresh fruit during an era when people in bombed-out cities were starving or selling their family heirlooms on the black market for small amounts of of flour, butter, or oil just so they could get by.

Halvorsen’s efforts to reach out to the people of Berlin helped send a message that they were not forgotten and would not be abandoned, Stewart said.

Despite his initial ambivalence about the airlift, Halvorsen, who grew up poor during the Great Depression, recognized a bit of himself in the children behind the fence and made a connection with them, he said.

“A simple person to person act of kindness can really change the world,” Stewart said.