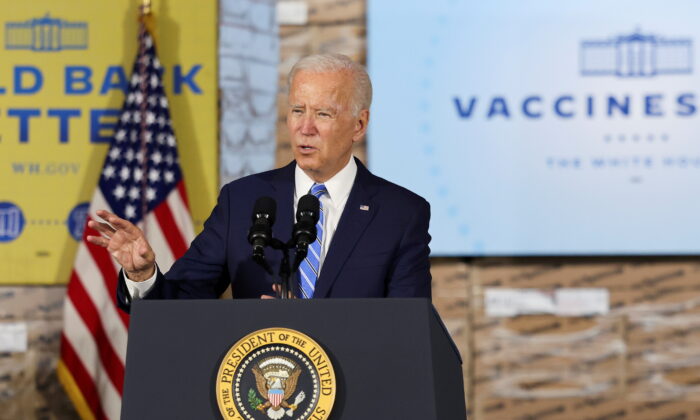 How much longer can this go on? As we head into the second year of the President Joe Biden “administration,” with the country in a shambles and heading no place good but full speed ahead, it’s time for all real Americans to take stock of our situation and formulate an emergency plan, with no time to spare.

Back in March, I wrote in these pages: “Biden’s Presidency Seems Ready to End.” In fact, Biden’s sham presidency never really began and whatever there was to it is now long over.

But then Brandon—excuse me! Biden!—isn’t really the president, simply the President in Name Only. Sure, he dutifully signs whatever executive order—increasingly authoritarian and blatantly unconstitutional—is put under his nose, which, at least until the next election, has the force of law until a federal court says otherwise. Even should a court block its implementation, as happened over the weekend with the illegal vaccine mandate being imposed on private industries by the Nixon-era excrescence of OSHA, the White House’s advice is to ignore it.

Biden also makes pro forma appearances on the international stage, including a mysteriously long audience with the former Cardinal Bergoglio (who’s every bit as much a pope as Biden is a president) that instantly gave rise to embarrassing rumors. And from time to time he even makes the short walk from West Wing to the Old Executive Office Building in order to stage something for the cameras in a studio-set version of the Oval Office.

But everybody in Washington knows the puppet presidency has no agency of its own, but is instead controlled from Kalorama by Barack Obama and his minions, including Ron Klain, who now serves as Biden’s chief of staff.

Meanwhile, the country he ostensibly leads is going to hell. We’ve gone from energy independence to passing the gasoline begging bowl, even as the forces behind Biden are busy choking off the domestic energy industry. Perhaps you’ve noticed the effects of this malicious policy at the gas pump.

Our long-neglected infrastructure, which is properly defined as roads, bridges, and buildings, remains a national disgrace, and the recent passage of a pork-laden $1.2 trillion “infrastructure” bill—with turncoat Republican help—not only won’t help a bit but will be paid for with imaginary money.

Overseas, right in Biden’s vaunted “foreign policy” wheelhouse, the Chinese are testing advanced missiles and expanding their fleet of aircraft carriers while what’s left of our Defense Department celebrates awarding four stars to a man in a skirt and hailing him as a “historic” female admiral.

A Navy sub’s trio of commanders was recently cashiered when the USS Connecticut struck an underseas mountain its crack officer corps somehow didn’t notice, while in San Diego the amphibious assault ship, Bonhomme Richard, was destroyed by an arsonist and a crew too incompetent to put out the blaze.

Oh yes, and the Marines recently got their tails kicked by the British in a desert-warfare exercise at their base at Twenty-Nine Palms in southern California. (The woke Marine Corps, of course, denies it.)

But the void in the White House is really the least of our problems, most of which we have brought upon ourselves. You get what you vote for and the American people, in rejecting Donald Trump, have voted for anarchy. As former New York City mayor Ed Koch said after being defeated for re-election in 1989, “the people have spoken, and they must be punished.”

Punishment is coming from every angle, principally from the criminal organization masquerading as a political party known as the Democrats. We now know that the vindictive but cunning loser Hillary Clinton set in motion the entire “Russian collusion”—in part with the collaboration of the Russophile leftist think tank, the Brookings Institution, and in part through the medium of a British spy channeling deliberate Soviet-style disinformation.

From the jump, it was obvious that the “Steele dossier” was a farrago of standard ex-KGB dirty tricks—in Russia and in Eastern Europe I’d seen this movie a dozen times—and I said so publicly at the time, practically from the day Buzzfeed published the “dossier.”

The American media deliberately weaponized this disinformation—which they knew at the time was false—against the lawfully elected president of the United States and crippled his presidency over it. And then they awarded themselves Pulitzer Prizes for their “reporting” of something that never happened.

Par for the course for the American version of Pravda. If you don’t think the New York Times hasn’t been in love with its Russian socialist confreres—and often actually been in bed with the KGB, its forebears, and its descendants—for the bulk of the 20th century, you need to wake up. Until the power of the Times is broken, the American Republic-as-founded will never have a moment’s peace.

But the weaponization didn’t and doesn’t stop there. “Former” members of the intelligence community now lie brazenly and openly on some of the “news channels,” such as CNN: the spooks are out of the shadows and in your living room.

The FBI is now investigating the alleged theft of Joe Biden’s daughter’s diary—a document that if genuine offers even more repellent insights into this stunningly dysfunctional family. How this is a federal matter is beyond me, unless the FBI has now become the Biden family’s private police force with a mandate to suppress bad news about the family. And if you don’t believe me, ask Hunter Biden.

Americans, quite properly, sense there’s something “off” about Biden and his crew, which is why his approval ratings continue to crater. But as long as the radical Left holds the media high ground, it’s hard for most people not obsessed by politics to grasp just how malignant these people are. For decades, they’ve made no bones about their desire to replace the United States of the founding with something “progressive.”

They’ve overtly collaborated with the Soviets, infiltrated the civil-rights movement, absorbed the legacy media, corrupted the lawmakers, overpowered academe, seized hold of the education of our children and now, in their moment of triumph, are forcing us to live in a fantasy world of their own psycho-sexual device, while their pet shrinks tell us that we’re the crazy bigots, via the media.