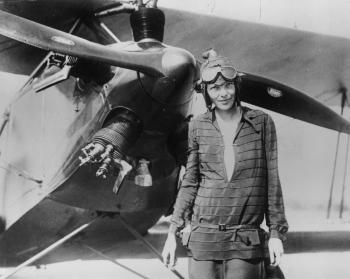 Amelia Earhart stands June 14, 1928 in front of her bi-plane called 'Friendship' in Newfoundland. Earhart (1898 - 1937) disappeared without trace over the Pacific Ocean in her attempt to fly around the world in 1937. (Photo by Getty Images)
US

By Yi Yang
Print
If Amelia Earhart were alive today, she would be celebrating her 76th Anniversary of crossing the Pacific Ocean. The legendary aviator was the first woman to fly across the Atlantic Ocean and from Honolulu, Hawaii to Oakland, California.

The sudden disappearance of Earhart during her attempted circumnavigation of the globe in 1937 remains an unsolved mystery. But recently, a group of researchers on an expedition discovered evidence on an uninhabited island approximately 1,800 miles south of Hawaii that suggested that the famous aviatrix could have died alone as a castaway on the island.

The expedition was conducted by Delaware-based The International Group for Historic Aircraft Recovery, or TIGHAR, according to East Valley Tribune. The team discovered three bone fragments earlier in January that could have belonged to the deceased pilot, in addition a few other modern items.

The bones were sent to the Molecular Science Laboratories at the University of Oklahoma to be tested for DNA, according to the Daily Mail. The team is optimistic that the evidence may be dated back to approximately when Earhart landed on the island. If the bone segments turn out to be Earhart’s remains, the century long mystery of her whereabouts would finally be solved. The Daily Mail reported that Earhart's family is unhappy at the idea that she may have suffered as a castaway.

The TIGHAR’s next mission includes searching for the missing plane and bones of a castaway that were first discovered in 1940.