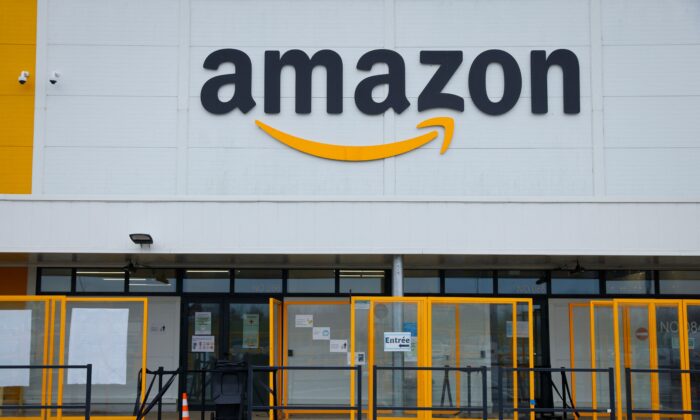 A picture shows the Amazon logo on the frontage of an Amazon's centre in Bretigny-sur-Orge, on Dec. 14, 2021. (Photo by Thomas SAMSON / AFP) (Photo by THOMAS SAMSON/AFP via Getty Images)
China Human Rights

At least five companies in tech giant Amazon’s supply chain are linked to forced labor in China, according to a new report by a corporate accountability watchdog.

Three of Amazon’s suppliers, Luxshare Precision Industry, Acbel Polytech, and Lens Technology, are alleged to have directly engaged in the use of forced labor in China, according to a report by the Tech Transparency Project, a research initiative of the Washington-based Campaign for Accountability (CfA).

Two other firms, GoerTek and Hefei BOE Optoelectronics, were supplied by factories implicated in the use of forced labor, the report said.

“Amazon hasn’t gotten as much attention as Apple on the issue of suppliers using forced labor, but Amazon deserves just as much scrutiny,” CfA Executive Director Michelle Kuppersmith said in a statement.

“If Amazon wants to retain the privilege of selling its proprietary goods to U.S. consumers, it has both a moral and legal obligation to deliver more than empty assurances that it’s operating a clean supply chain.”

An Acbel Polytech spokesperson said the company was audited in 2019 and 2021 through the Responsible Business Alliance’s Validated Assessment Program, and that neither review found violations of human rights.

“As a long-established corporation, Acbel are duty-bound to abide by international human rights norms and to respect and promote human rights and all our subsidiaries explicitly prohibit any violations of human rights, including forced labor, arbitrary detention, human trafficking, and child labor,” the person said.

“Acbel will continue to practice and protect the human rights of all our employees and is more than welcome to open for any public and official examination.”

U.S. businesses have proven eager to stay in business in China’s far west xinjiang region, where the Chinese Communist Party (CCP) has engaged in a vast campaign of repression against Uyghurs and other Muslim minorities, described by the U.S. government and others as a genocide. More than 1 million ethnic Muslim minorities are estimated to be detained across a network of internment camps, where they’re subjected to forced labor, torture, and political indoctrination.

Last June, a group of lawmakers called on Apple to divest itself of suppliers that used forced labor in China, after it was found the tech giant used seven suppliers that participated in programs believed to be linked to the CCP’s genocide.

Apple flatly denied that its suppliers used so-called “labor transfers,” in which people from Xinjiang who have been forced into reeducation camps are then transferred to factories elsewhere and forced to work, despite video evidence suggesting the transfers took place.

A previous analysis by the Australian Strategic Policy Institute found that some 80,000 Uyghurs had been moved out of Xinjiang using such programs.

The CfA report suggests that Amazon’s suppliers are involved in the same practice. Its supplier Luxshare Precision was one of the companies that were originally implicated in the complaint against Apple last year.

Amazon’s own supplier guidelines state that “Amazon suppliers must not use forced labor” and that “Amazon does not tolerate suppliers that traffic workers or in any other way exploit workers by means of threat, force, coercion, abduction, or fraud.”

Yet, in June 2021, the company maintained all five companies listed in the report as suppliers, even as their connections to forced labor were made public, the report said.

Notably, a sixth supplier, the Esquel Group, remained on Amazon’s supplier list for more than a year after the U.S. government sanctioned one of its subsidiaries for using forced labor in China.

The suppliers implicated in the forced labor are responsible for creating products for Amazon’s private brands such as Amazon Basics and Amazon Essentials.

The issue of forced labor is likely to become more pressing for Amazon and similar companies, since the Uyghur Forced Labor Prevention Act, which was signed into law in late 2021, bans all imports from Xinjiang unless the U.S. importer can prove the item isn’t made using forced labor.

As of March, Amazon still lists stores on its website that advertise their products as being 100 percent “Xinjiang Cotton.”

“The Uyghur Forced Labor Prevention Act not only empowers but directs U.S. Customs officials to no longer operate under the presumption of innocence with companies importing goods tied to Xinjiang,” Kuppersmith said.

“Substantial evidence suggests Amazon has not done even the most basic due diligence. If Amazon continues to ignore this problem, customs officials have no choice but to intervene.”

Thus far, Amazon has rejected any assertion that it’s breaking any laws or using forced labor.

“Amazon complies with the laws and regulations in all jurisdictions in which it operates and expects suppliers to adhere to our Supply Chain Standards,” an Amazon spokesperson said.

“We take allegations of human rights abuses seriously, including those related to the use or export of forced labor. Whenever we find or receive proof of forced labor, we take action.”

The representative didn’t respond to a question about why Esquel Group remained on Amazon’s supply chain for more than a year after being subject to U.S. sanctions.

Luxshare and Lens Technology didn’t respond by press time to a request by The Epoch Times for comment.