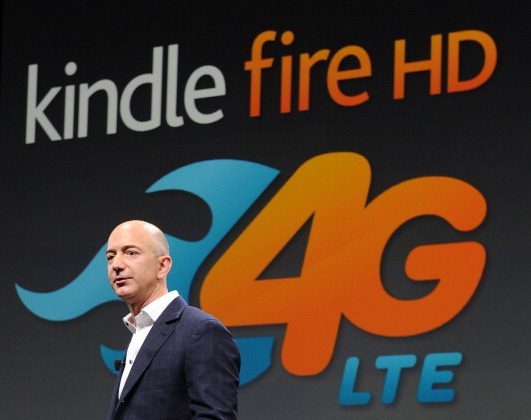 Jeff Bezos, CEO of Amazon.com, introduces the new Kindle Fire HD Family and Kindle Paper white during an Amazon press conference on September 06, 2012, in Santa Monica, California. Six months later, the company is slashing prices for the device, because it can pass on cost savings to customers. (Joe Klamar/AFP/GettyImages)
Business & Markets

Amazon announced on March 13 it will reduce prices of its newest Kindle Fire HD 8.9″ from $299 to $269. The company also announced the launch of the device in Europe and Japan.

Dave Limp, Vice President at Amazon Kindle, said: “We’ve been able to increase our production volumes and decrease our costs… Whenever we are able to create cost efficiencies like this, we want to pass the savings along to our customers.”

The WiFi version without support for mobile data will cost $269, the LTE version will sell for $399.

Amazon claims it makes more money if people use the Kindle to buy products from its store, either by downloading multimedia or using the device to order physical items. This is why it is selling the device at cost, beating the prices of other tablets such as Apple’s iPad and Samsung’s Galaxy.

The problem is that nobody knows if this strategy is working, as Amazon is not disclosing sales figures for the Kindle. This is different from Apple, which gives a detailed breakdown of unit shipments with each quarterly earnings announcement.

The last couple of quarterly reports, however, tell us that operating margins at Amazon are declining steadily. From a high of 4.1 percent in June 2010 (the year the Kindle was launched), they dropped to 1.9 percent in the quarter ending December 2012.

Morgan Stanley analysts believe that this is not a problem and that margins will soon start to rise again.

“By tolerating a lower margin than most competitors, Amazon.com is able to focus on investing in data facilities and driving scale. Over time, we anticipate Amazon.com’s total market share will continue to grow, allowing margins to expand in the business and driving significant absolute profit dollars for the company to reinvest elsewhere,” the analysts write in a note to clients.