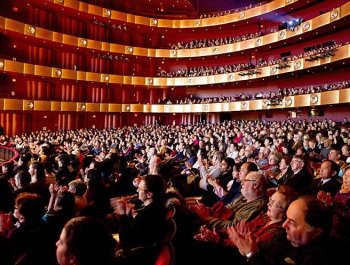 By Epoch Times Staff
Print
NEW YORK—Auctioneer Barry Cherwin was an enthusiastic member of the packed house that closed the Shen Yun performance at Lincoln Center's David H. Koch Theater on Sunday afternoon. The show received a standing ovation and two curtain calls at the end.

“There is just a lot of excitement, great sounds and wonderful dancing. It is impossible to say which was my favorite—all of them were so beautiful and exciting,” Mr. Cherwin said.

The extravaganza he has observed was performed by Shen Yun Performing Arts New York company, indeed based in the city, which transports viewers back through ancient China allowing them to be part of scenes of traditional daily life from the country's 5,000-year history. These noble and virtuous scenes of ancient China are juxtaposed with conditions in contemporary China.

“The dance about the horses was amazing,” Mr. Chernwin exclaimed.

The dance, Herding on the Grasslands, portrays horsemen galloping beneath blue skies forming a vision of exhilarating strength. The dancers evoke powerful images of Mongolia’s expansive wilderness as they capture the high spirits and warm hearts of its people, according to the program.

The last dance, The Opening of Heaven's Gates, took his breath away. "It was really awesome,” he said, adding, “the costumes, the cast, the dance, the great music… Everything about it was great.”

The dance opens with a young man holding a banner that says, “Falun Dafa is Good.” Doing this in China today is grounds for arrest under the currently ruling communist regime. State police arrive and attack the man, but bystanders intervene, and are rewarded for their courage with a miraculous scene. The dance bespeaks of an ancient Chinese proverb, “good begets good and evil begets evil,” the program reads.

One of three companies touring concurrently, Shen Yun Performing Arts New York will perform next at Proctors Theater, Schenectady, N.Y., on Jan. 19. The company will then continue on to perform at The Kennedy Center Opera House in Washington D.C., Jan. 26-30. For more information, visit ShenYunPerformingArts.org.