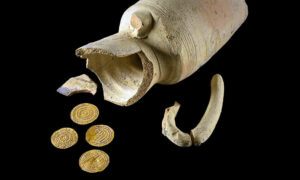 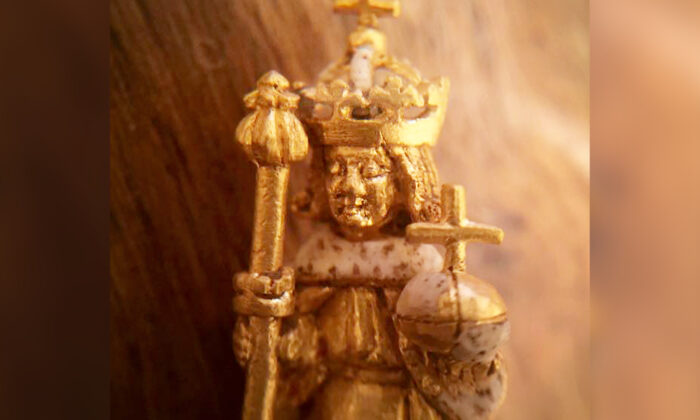 An amateur treasure hunter recently identified a solid gold artifact he unearthed as the long-lost centerpiece of King Henry VIII’s crown. The object was found near a pond in the Northamptonshire countryside, at the back of Market Harborough Golf Club.

At the site, which was once a medieval village known as Little Oxendon, 49-year-old Kev Duckett found a 24-carat gold figurine bearing the apparent likeness of King Henry VI.

The British Museum says that further research is needed to confirm the find, according to BBC.

The treasure hunter from Fleckney told The Harborough Mail that he was beyond thrilled to discover the once-lost item.

“I can still hardly believe that I have found this magnificent royal piece in a humble farmer’s field near Market Harborough,” he said. “This beautiful figurine of King Henry VI used to be an integral part of the crown worn by Henry VIII, one of our most iconic kings, as well as by so many other monarchs.”

Duckett, who has been searching for treasure for over 30 years, added that verifying the piece from a replica of the entire crown, kept in Hampton Court Palace in London, in person was a surreal experience.

“The very thought that Henry VIII used to wear this figurine in his crown on his head over 500 years ago when he was the most powerful man in the land is just mind-blowing,” he said.

He first unearthed the 1.4-inch-long (approx. 3.5-centimeter) figurine in 2017, but it took three years to identify where it came from.

“I was totally stunned—I realized instantly that this was something very special indeed. I knew it was very old, but I had no idea what it was,” he said. “I started trawling through royal inventories to try to establish which king this was.”

He added that he “must have sent hundreds and hundreds of emails” to experts who could help identify the piece.

However, it was his own research that helped identify its origins. After researching King Henry VI, Duckett realized the figurine belonged to King Henry VIII’s coronation crown, which was initially decorated with figurines of Christ, St. George, and the virgin and child.

But after splitting from the Catholic Church, King Henry VIII soon replaced the religious figurines with the three saint kings of England—Edward the Confessor, St. Edmund, and Henry VI.

“I found out that [Henry VIII] had three jewels specially made to be added to the state crown because of the Reformation as he split from the Catholic Church,” Duckett shared. “Henry wanted everyone to know that he was more powerful than the Church.”

After identifying the piece, the treasure hunter was absolutely stunned.

“It blew my mind as I gazed at it and it sank in that the figurine I’d dug up in the countryside near Market Harborough had helped to adorn Henry VIII’s beloved crown,” he said.

Until now, the figurine from the coronation crown, which would’ve been worn by King Charles I roughly 100 years after Henry VIII, was lost to history. After it was removed from the crown, it may have been lost during the Battle of Naseby in the English Civil War in 1645, Duckett believes.

“Contemporary paintings show that the jewel disappeared from the crown during Charles’s reign,” he says. “And also that Charles and his army walked directly over the find spot both on the way to battle and also whilst fleeing the battlefield.”

In a Facebook post on Feb. 4, Duckett clarified that some “strange versions” of his story have been circulating, but are unfounded.

“I don’t think that Charles rode around the battlefield wearing the heavy bling coronation crown,” he joked. “Contemporary paintings suggest that the jewel was removed before hand.”

Duckett did, in fact, hand the figurine over to the British Museum a few weeks after discovering it. Now, it’s up to the museum to decide what to do with the piece next.

“As required by the Treasure process the British Museum expert has examined the piece and identified it as dating from the late Middle Ages,” a spokeswoman from the museum told The Harborough Mail.

However, the artifact was classified as a “pilgrim badge,” not yet confirming that it’s regal origins, according to BBC.

According to the museum, the piece must first be provisionally valued and seen by a treasure valuation committee, which will recommend a price for the find. Before placing it on display, the museum would be invoiced and expected to pay any interested parties (usually, the landowner and finder) for the artifact.

The figurine couple be worth more than £2 million, according to editor of Treasure Hunting Magazine Julian Evan-Hart, who says he is “99.9%” sure the object is the real thing.