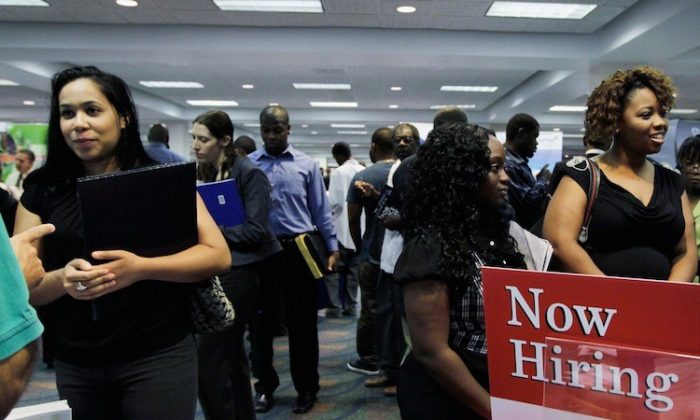 People looking for work at a recruiter's desk setup at a job fair in the James L. Knight Center, in Miami, Fla. (Joe Raedle/Getty Images)
By Naveen Athrappully

Roughly a fifth of American companies are looking to scale down their workforce in the coming months as businesses come under pressure of low margins, with many foreseeing an economic recession, according a January survey by the National Association for Business Economics (NABE).

According to the survey, almost 20 percent of respondents expect employment at their firms to fall in the coming months. “For the first time since 2020, more respondents expect falling rather than increased employment at their firms in the next three months. Fewer respondents than in recent years expect their firms’ capital spending to increase in the same period, said NABE president Julia Coronado, founder and president of MacroPolicy Perspectives LLC, according to a post by the NABE.

“The results of the January 2023 NABE Business Conditions Survey indicate widespread concern about entering a recession this year,” Coronado said. More than 50 percent of respondents see the possibility of a recession over the next year at 50 percent or higher.

The January survey covered 60 NABE members and was conducted between Jan. 4 and 11, reflecting fourth-quarter 2022 results and a near-term outlook.

The NABE survey found that businesses are facing challenging conditions. According to respondents, the biggest downside risks to their economic outlooks are higher costs and interest rates.

Profit margins remained under pressure, down to negative 25 Net Rising Index (NRI) in the January survey from negative 10 NRI in October. NRI refers to the percentage of panelists reporting positive values minus those reporting declining values.

The last time profit margins were at this level was in the mid-2020 surveys. The profit margin outlook for the next three months has improved, moving to negative 7 NRI from negative 17 NRI.

“Wages rose at a majority of respondents’ firms in the last three months of 2022, and more firms added workers than reduced headcounts. But far more firms than in the past three years reported falling profit margins.”

Other surveys have also found that several companies intend to lay off workers this year. According to a Resumebuilder.com survey of 1,000 business leaders in December 2023, 61 percent expect their organizations to lay off workers in 2023.

Out of the respondents who expect layoffs, 57 percent believe that 30 percent or more of their employees would be terminated this year.

The survey found that 70 percent of companies are likely to implement a hiring freeze this year, with 74 percent of leaders agreeing that it would be easier to fire poor performers in 2023 due to employees losing “bargaining power.”

Salesforce plans to lay off 10 percent of its 80,000-strong workforce. Goldman Sachs will spend $275 million on terminating 3,200 jobs.