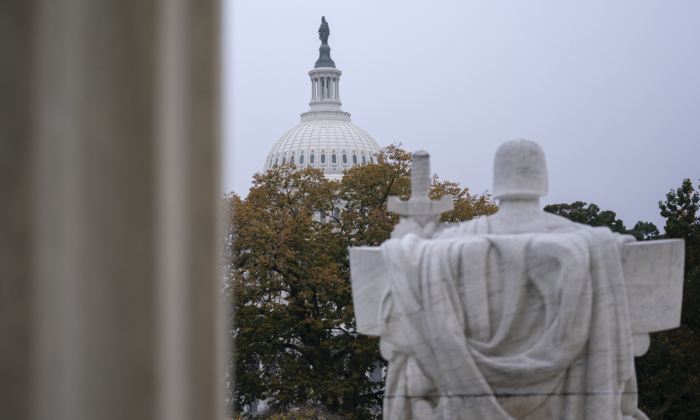 The U.S. Capitol is seen from the Supreme Court in Washington on Oct. 20, 2020. (Stefani Reynolds/Getty Images)
Election Integrity

All Eyes on Congress as Lawmakers Vow to Oppose Electoral Votes

President Donald Trump’s multilayered effort to challenge the results of the election is expected to culminate on Jan. 6, 2021, when the Electoral College vote count will almost surely be challenged by a group of Republican lawmakers who vow to block electors from seven states where allegations of voter fraud and misconduct have been raised.

The Republican presidential electors in Pennsylvania, Georgia, Michigan, Wisconsin, Nevada, Arizona, and New Mexico cast procedural votes for Trump on Dec. 14, creating dual slates of electors in Congress for the first time since 1960. This year, only the Democratic electors’ votes in the seven states come affirmed with certificates of ascertainment signed by state authorities and are on display on the website of the National Archives.

The president and several third parties are pursuing legal challenges in six of the seven states, including several cases pending in the U.S. Supreme Court. The lawsuits allege that millions of votes—enough to alter the outcome of the 2020 presidential race—were illegally cast, processed, or counted. Actions by the courts in any of the cases over the next two weeks would impact how the electors from the disputed states are counted during the joint session of Congress.

Rule as they may, the courts can’t dictate how each member of Congress should vote. Rep. Mo Brooks (R-Ala.), the first congressman to say he will lodge a challenge when the votes are counted, told The Epoch Times that it’s up to individual citizens to demand that their representatives take a stand and support the challenges.

President Donald Trump turned up the heat on the event by calling on his supporters to descend on Washington on Jan. 6 for a protest.

“Be there, will be wild!” he wrote on Twitter.

Senate Majority Leader Mitch McConnell (R-Ky.) has acknowledged former Vice President Joe Biden as the president-elect amid standing legal challenges by President Donald Trump to the results of the elections in the seven states.

McConnell also has urged Republican senators to not join in on the challenge, arguing that it will create harmful optics for the party. To the lawmakers who plan to stand up for Trump, the opposite is true.

“To me, it’s a bad look for the party not to step up at this point in time. To me, Donald Trump has transformed the Republican Party,” Rep.-elect Barry Moore (R-Ala.) told The Epoch Times. “So many of us have campaigned on his coattails in the past and now he needs us and it’s time to step up. … We have got to make sure that 75 million Americans don’t feel like their vote doesn’t count anymore.”

Brooks said: “What is important is how the vote looks in the United States of America. The issue is going to be very simple. Are members of the U.S. House of Representatives and U.S. Senate going to support or acquiesce to voter fraud and election theft or are they going to fight it, bearing in mind that our election system is the underpinning of our republic? If you do not have an honest and accurate election system, you have no Republic.”

Several House Republicans have joined Brooks in saying they’ll challenge the electoral votes, including Rep. Matt Gaetz (R-Fla.) and four representatives-elect who will begin their terms on Jan. 3, 2021: Moore, Bob Good (R-Va.), Madison Cawthorn (R-N.C.), and Marjorie Taylor Greene (R-Ga.). Brooks said there are more than enough House members on board to challenge each of the seven disputed states.

One member of the House and one senator are required to lodge a challenge; no senators have committed to joining the challenge.

Five senators, including Sen. Rand Paul (R-Ky.) and Sen.-elect Tommy Tuberville (R-Ala.), have indicated they are open to joining the challenge.

“We have a rapidly growing group of House Members and Senators,” Taylor Greene wrote on Twitter Monday after attending a White House meeting concerning the electoral vote, adding that the “Jan 6 challenge is on.”

Presidential candidates in the United States win elections by winning the most electoral votes.

The Electoral College system apportions a certain number of votes to each state. When voters in a state vote for a party’s candidate, they’re actually casting a vote for that party’s slate of electors, or people elected to cast electoral votes.

Those electoral votes are counted by Congress. If a candidate gets 270 or more, they win the presidency.

Dueling electors are highly unusual, but they have happened in U.S. history. The last time was in 1960, when the governor of Hawaii certified electors for Republican Richard Nixon. Democratic electors cast their votes for Democrat John F. Kennedy.

A subsequent recount determined Kennedy actually won the state, and he was declared the winner in the joint session in 1961.

John Eastman, professor of law at the Chapman University School of Law, pointed to the Kennedy–Nixon scenario when talking about the seven states with dueling electors this time. Eastman is the attorney representing Trump in a Supreme Court appeal over the administration of the election in Pennsylvania.

“We have historical precedent here, and in each of these states, there is pending litigation challenging the results of the election. If that litigation proved successful, then the Trump electors, having met and voted, would be able to have those votes certified and be the ones properly counted in the joint session of Congress on January 6,” Eastman told NTD Television.

Gary Gregg II, director of the McConnell Center at the University of Louisville, told The Epoch Times that short of “actual evidence of fraud” that would move Congress to certify the alternate set of electors, the ones certified by the state’s governors—all for Biden, in this case—will be the ones counted.

“It’s obviously a very, very long shot,” added Robert Hardaway, a professor at the Sturm College of Law at the University of Denver, because “all the challenges have not been successful by both Trump and his supporters.

“But that’s the reason for it,” he told The Epoch Times. “If later, it’s determined the Republican slate should have been elected, they’ll have the vote already in place.”

In three of the seven states in question—Michigan, Pennsylvania, and Wisconsin—Republicans currently control the state legislatures while Democrats hold the governor’s mansions. In New Mexico and Nevada, Democrats control both. In Georgia and Arizona, Republicans control both.

Republicans haven’t been able to gain enough support to get the dueling electors certified by the top election official—usually the secretary of state—nor have the state legislatures exercised their constitutional right to take back the power to choose which slate of electors is the valid one.

According to the Congressional Research Service, when dueling slates are received, members of Congress in the joint session consider the list when it’s from a different state authority than the certified list, and conduct a vote. Acceptance of either slate would then require a concurrent agreement in both the House and the Senate.

If there isn’t a conflict in terms of state authority, the one determined to be appointed pursuant to the state’s election laws is counted. If there is no determination by a state authority of which slate was lawfully appointed, the two chambers agree concurrently to accept the votes of one set, or decide not to accept either set. If the two chambers don’t agree, the electors certified by the governor shall be counted.

With electors having cast their votes, attention turns to the next month’s joint session of Congress, which takes place just three days after newly elected members of Congress are sworn in.

Challenges were made by Democrats in 2016 but failed because no senators supported them. In 2004, Rep. Stephanie Tubb Jones (D-Ohio) and Sen. Barbara Boxer (D-Calif.) objected to votes from Ohio, but both chambers rejected the objection.

The basis for an objection appears to be that the electoral vote or votes weren’t “regularly given” by an elector and/or that the elector was not “lawfully certified,” based on state election laws, according to the Congressional Research Service.

If an objection meets the requirements, the joint session is suspended, and each chamber withdraws to meet and debate the objection and choose whether to vote to uphold it. Unless both chambers vote in the majority for the objection, it fails. If it’s approved, it nullifies the state’s electoral votes and could lead to the alternate slate being accepted.

Some experts see an objection succeeding as practically impossible.

“It’s so far out of the realm of possibility,” Gregg said. “The chance of getting a senator to agree, a Republican senator to agree, is a difficulty. Then to get the Senate and the House to agree? At this point … this is not going to happen.”

“I think when you get to the joint session of Congress, there’s going to be a fight about which of the slates of electors need to be counted, based on the evidence and the statutory violations that are presented at the time,” Eastman said.

As of the currently certified vote count, Biden has 306 electoral votes to Trump’s 232. Trump hasn’t conceded, and The Epoch Times won’t declare a winner until all legal challenges are resolved.