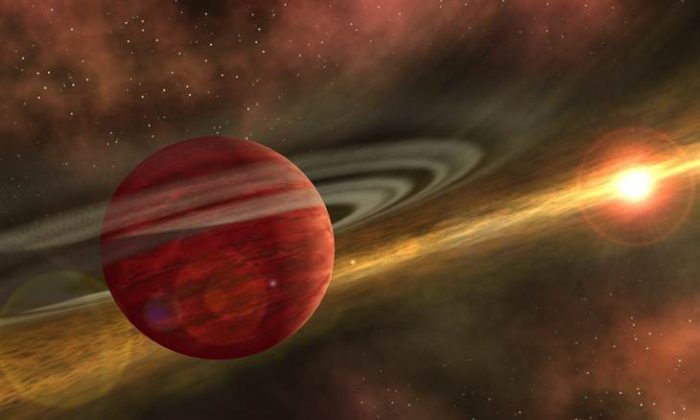 The alien planet that was just found by astronomers is gigantic and bigger than any planetary body in the solar system.

The exoplanet, dubbed HD 106906 b, orbits its single parent star at an average of 650 times the distance between the Earth and the sun.

The large planet shocked astronomers and has provoked questions about how these types of planets are formed.

“This system is especially fascinating because no model of either planet or star formation fully explains what we see,” study lead researcher Vanessa Bailey, a fifth-year graduate student in the University of Arizona’s department of astronomy, said in a statement.

Planets close to their stars, such as Earth, form from small asteroid-like bodies, some astronomers believe. But this process would be too slow to explain the growth of giant planets that aren’t close to their star, like the alien planet that was just discovered.

Bailey and her team have developed several alternative theories, including formation like a mini binary star system.

“A binary star system can be formed when two adjacent clumps of gas collapse more or less independently to form stars, and these stars are close enough to each other to exert a mutual gravitation attraction and bind them together in an orbit,” Bailey said. “It is possible that in the case of the HD 106906 system the star and planet collapsed independently from clumps of gas, but for some reason the planet’s progenitor clump was starved for material and never grew large enough to ignite and become a star.”
Researchers were able to detect some remnant debris that they believe was left over by the formation of the planet and the star.
The young, 13 million years old planet, still glows from the residual heat of the formation, the researchers believe.

A research paper on the subject will be published in The Astrophysical Journal Letters.