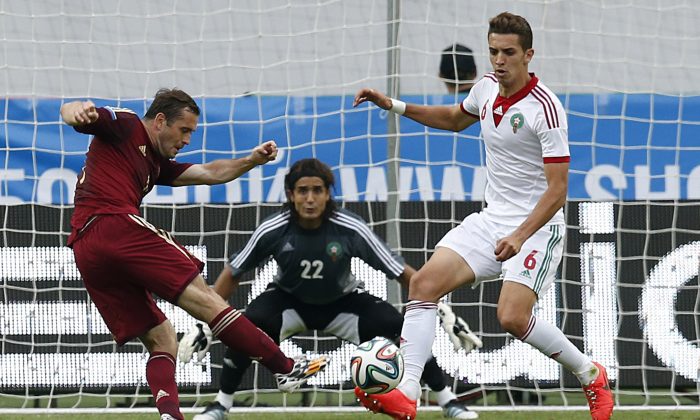 Alexander Kerzhakov scored a goal to put Russia back into the game against Korea on Tuesday.

The teams are playing their opening match in the 2014 World Cup.

Kerzhakov, a substitute, knocked the ball in after it bounced around the penalty box in a hectic moment.

Russia will next play Belgium on Sunday, June 22 before playing Algeria on Thursday, June 26.

Korea will play Algeria on Sunday before playing Belgium on June 26.

CUIABA, Brazil—Alexander Kerzhakov scored with one of his first touches after coming on as a substitute to earn Russia a 1-1 draw with South Korea on Tuesday in a World Cup match marked by the first big goalkeeping error of the tournament.

Russia goalkeeper Igor Akinfeev spilled Lee Keun-ho’s speculative long-range shot into his own net to gift South Korea a 68th-minute lead at the Arena Pantanal in Cuiaba in Group H.

But Kerzhakov bailed his teammate out, turning in a shot from close range in the 74th — three minutes after coming on as a substitute — to rescue a point for Russia in a poor-quality match.

Akinfeev stayed on the ground inside his own net, head in his hands, after making his blunder, clearly embarrassed after dropping what was a routine save from a shot from about 30 yards. He was consoled by a couple of teammates, who patted him on the back, but could soon join in the celebrations when Kerzhakov equalized soon after.

The explosive six-minute spell that featured both goals was not in keeping with the rest of a fairly mundane game characterized by slow build-up play, poor passing and wayward finishing.

A point leaves both teams behind Belgium, which beat Algeria 2-1 earlier Tuesday, but the group appears wide open based on the opening two fixtures.

Having lost four of its last five games heading to Brazil, the South Koreans came into their eighth straight World Cup with concerns over their flimsy defense and a lack of goal threat. A 4-0 thrashing by Ghana in a warm-up in Miami last week highlighted those worrying deficiencies perfectly.

Defensively, they weren’t too bad against Russia but there was no hiding their toothless attack going forward, with the experienced Park Chu-young starting as the lone striker but justifying fears that he has lost his way after three ineffective years with Arsenal in the English Premier League. He was substituted in the 56th.

Russia, led by former England coach Fabio Capello, was just as lifeless in attack — at least until Kerzhakov and Alan Dzagoev came off the bench — and a dire first half was marked by the large contingent of Brazilian fans in the crowd doing slow hand clapping.

Save for a shot by Son Heung-min that flew over the bar in the 39th when the forward was free at the edge of the area, there was barely a chance created in the first half. Capello stood with his hands on his hips in the technical area throughout the first 45 minutes, looking distinctly unimpressed.

There was a major improvement after the break, although it required the mistake by Akinfeev to really get the game going.

However, South Korea couldn’t hold on and when Dzagoev’s cross-shot was spilled out by goalkeeper Jung Sung-ryong and Hwang Seok-ho’s clearance went straight at Andrei Yeshchenko, Kerzhakov was on hand to bundle home from inside the six-yard box.