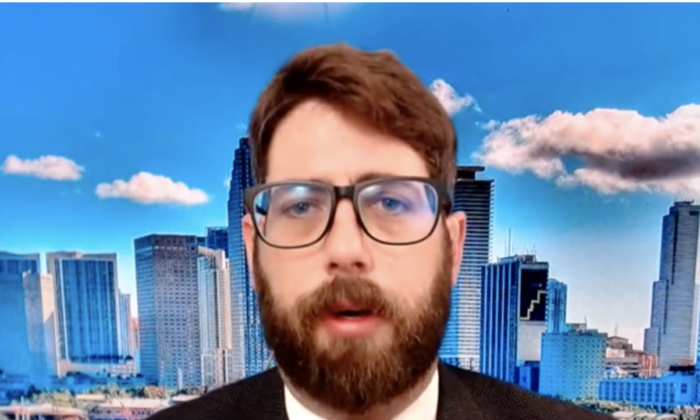 Journalist, educator, and co-author of the book “Crimes of the Educators: How Utopians are Using Government Schools,” Alex Newman, talks to NTD Evening News on May 6, 2020. (NTD)
Economic Policies

The United Nations’ 2030 Agenda for sustainable development informs government policies to restrict farming and transform the food systems in different parts of the world, said Alex Newman, an award-winning international journalist who has covered this issue for over a decade.

The 2030 Agenda is a plan of action devised by the United Nations (U.N.) to achieve 17 sustainable development goals (SDG). The goals and the 2030 Agenda for Sustainable Development were adopted by all UN member states in 2015.

Then-Secretary General of the U.N. Ban Ki-moon called the 2030 Agenda “the global declaration of interdependence,” (pdf) Newman said in a recent interview on EpochTV’s “Crossroads” program.

“In my opinion, [it] was a direct swipe at our Declaration of Independence … So instead of being independent nations, we will all be now interdependent.”

The 2030 Agenda “covers every element of human life, every element of the economy,” including global wealth redistribution not only within the nations but also among the nations, Newman commented. The Agenda “specifically says that we need to change the way that we consume and produce goods,” he added.

In September 2021, the U.N. held the Food Systems Summit, which emphasized the need “to leverage the power of food systems” for the purpose of achieving all 17 sustainable development goals by 2030, according to a U.N. statement.

“Everyone, everywhere, must take action and work together to transform the way the world produces, consumes, and thinks about food,” the statement said.

The sustainable development agenda emerged in the 1970s when the United Nations tried to define it at a conference in Vancouver, Canada, in 1976. Newman said.

The conference, which was the first U.N. Conference on Human Settlements known as Habitat I, adopted the Vancouver Declaration (pdf), a report that provided recommendations for U.N. member states.

Newman quoted an excerpt from this report: “Land cannot be treated as an ordinary asset controlled by individuals and subject to the pressures and inefficiencies of the market. Private land ownership is also a principal instrument of accumulation and concentration of wealth, therefore contributes to social injustice.”

Newman said that, in his view, the U.N. ultimately wants to get rid of private land ownership. “We see this all over the world. This is not just happening in the Netherlands.”

He thinks that a war is taking place against farmers and ranchers, especially those who are independent or those who are not part of the system. “They want to remove small farmers, even medium farmers, from their land, and they want to bring it all under the control of these—I think there’s no other term to describe it—fascistic public-private partnerships.”

Newman noted some examples to illustrate his opinion: The Chinese regime forces peasants to move to megacities, farmers are killed in South Africa, and the Securities and Exchange Commission (SEC) in the United States proposed a new rule that could bankrupt small and medium farmers.

In March 2022, the SEC proposed a regulation that “would mandate publicly traded companies to report on their carbon emissions and other climate-related information,” as well as report similar information from any companies with which they do business, according to an SEC statement.

As a consequence, all companies in the business supply chain of a publicly traded entity would have to report their carbon emission and climate-related data.

”Imposing regulatory overreach on farmers and ranchers falls outside of the SEC’s congressionally provided authority,” the senators said in a statement. “This substantial reporting requirement would significantly burden small, family-owned farms.”

The American Farm Bureau Federation said in a statement that the proposed rule could create “substantial costs” for farmers because they do not have teams of compliance officers or attorneys like large corporations. Moreover, it may push out of business small and medium-sized farmers and force food-processing companies to look for agricultural raw products outside of the United States, the statement asserted.

“One of the things that the communists loved to do is create scarcity and create dependents. As long as you have independent people who are able to take care of themselves, there really is no need for the government to run your life and to control everything that you do,” Newman said.

“Americans are good examples,” Newman continued. “As long as the food production is widely diffused, and it’s in the hands of independent producers, it becomes very difficult to get people to bend to your will.”

The whole idea of using food as a weapon has been a hallmark of communist regimes for 100 years, Newman explained. “It’s also been a hallmark of the very same people who are openly promoting the U.N. Agenda 2030, the sustainable development goals, and even the World Economic Forum.”

Those who contrived “the controlled demolition of our food supply … want to completely restructure it,” in order to gain total centralized control of that because it gives them absolute power over everybody under their jurisdiction, Newman said.

For example, the Chinese regime and the mega-corporations formed a public-private partnership to centralize control of the food supply, Newman said.

It’s similar to what occurred in Nazi Germany, where on paper private companies own the business and ostensibly manage their businesses, but, ultimately, the private companies will be taking their orders from the government, Newman explained.

In the United States, the ESG metrics are used to “hijack control of the business sector, of the individual companies, and put them at the service of the goals of what I call the predator class—the people behind the World Economic Forum, behind the United Nations,” Newman said. (ESG stands for environmental, social, and governance criteria that are used to evaluate companies on how compliant they are with sustainability.)

The food supply centralization is just one component of their agenda, but it is a very critical one, which along with energy and other things, allows them to control humanity, he added.

In January 2021, the World Economic Forum (WEF) and the government of the Netherlands launched a new initiative called Food Innovation Hub, according to a WEF statement. The Hub, joined by several public and private sector partners, is a key platform that will use technology and innovations for food systems transformation, the statement said.

The Food Innovation Hub secured “multiyear funding “ from the Netherlands’ government and established its Global Coordinating Secretariat that would coordinate the efforts of the regional food hubs as well as align with global food processes and initiatives such as the UN Food Systems Summit, the statement read.

The global food Secretariat would be located in Wageningen, Netherlands, at the heart of the Dutch agrifood ecosystem, and would direct the development of global, regional Food Innovation Hubs, according to the “Invest in Holland” website.

“The work of these regional hubs is already underway, with more than 20 organizations leading the initiative across Africa, ASEAN [Association of Southeast Asian Nations], Colombia, and India, and the European hub,” the website said.

Ramon Laguarta, CEO of PepsiCo, said in the WEF statement: “Food is one of the main levers we can pull to improve environmental and societal health. With the right investment, innovation, and robust collaboration, agriculture could become the world’s first sector to become carbon negative. … Unlocking this potential will take ambitious multi-stakeholder, pre-competitive collaborations to transform the food system—exactly what these Hubs are designed to cultivate.”

Among the solutions advocated by the WEF to reduce global greenhouse gas emissions is replacing livestock-derived foods with alternative forms of protein, such as insects, and lab-cultured proteins, according to a 2019 white paper (pdf) commissioned by the WEF.

In response to this recommendation, several indoor agriculture start-ups have emerged, including Ÿnsect, “the first fully automated vertical insect farm in the world, able to produce 100,000 tons of insect products a year,” a WEF report said.

In March, France-based Ÿnsect acquired Jord Producers, a U.S. mealworm manufacturer, to expand its operations in the United States by entering the American chicken feed market, said a company statement.

How People Can Stop Food Takeover

“We need to really start providing an alternative economic structure, because if we let them get control of the entire food supply, I guarantee you, it will be used as a weapon to take your freedom, to get you to do things you otherwise wouldn’t want to do, to undermine the sovereignty of your nation, whether you’re in the United States or another country, and ultimately to dispossess people of their private land and of their freedom.”

“If you have agricultural land, do not sell out to these people. They’re trying to bribe the farmers to leave their land.”