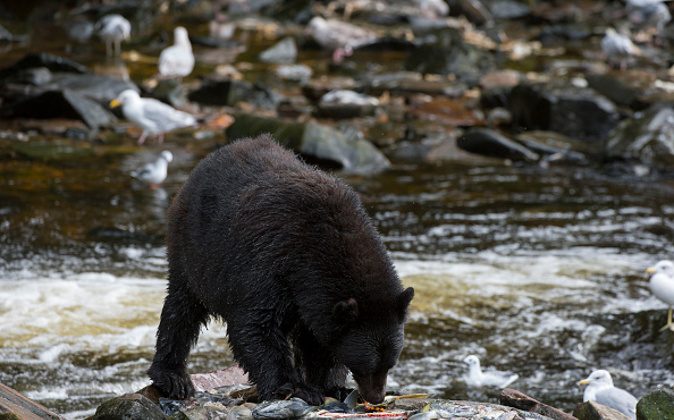 Spotting a bear in the Alaskan wilderness is an exciting and terrifying prospect for nearly 2 million visitors who make the trip up north annually.

However, dealing with bears is a chore and just part of life for locals.

On a good day, that means constant vigilance and being conscious about little things—like where you stash your fishing gear and old take-out containers.

On a bad day, dealing with bears can be dangerous and very expensive.

Nestled in the winding waterways of Southeastern Alaska is the town of Haines. Touted as the “adventure capital” of the state, it has the spirit of a true frontier outpost.

It’s the kind of place where you can buy hunting rifles and liquor directly across the street from the cruise ship dock.

It’s also the location of a record-high number of bear killings out of self-defense in 2020.

That year, police received an astonishing 452 phone calls requesting help with bears breaking into homes, restaurants, and cars in search of food.

Haines police chief Heath Scott indicated the number of calls was eight times higher than in 2019.

The outcome was grim.

Official counts stated a total of 46 bears—an unprecedented number—were culled out of necessity to protect human life and property. Some Haines locals say the unofficial number was closer to 60 bears.

Last year, Haines police received more than 50 bear-related calls. That’s still above the average, which is around 35-50 calls per year.

Quick to sound the alarm, some climate alarmists cite lower fish populations resulting from rising water temperatures as the cause for higher numbers of bear rampages over the past two years.

But some Haines residents aren’t so quick to sweep marauding bears under the rug of climate change.

Compounding this is irresponsible trash management and nearby fish farms. The latter is something many Alaskans assert has quietly fueled this problem for years.

Long has had more than her fair share of encounters with intrepid bears in the past 36 years. She grew up fishing in Alaska’s vast wildlands around the Aleutian Islands and Haines.

“I remember playing on the beach as a kid and never really worried about bears,” she said, adding there was no electricity where she grew up until 2009.

Long described sunny days as a young girl spent catching salmon barefoot with her dog. But since then, she’s noticed increasingly bold behavior among the local bear population.

She attributes this to a shift in perception where bears now associate humans directly with food.

Much of this derives from negligent behavior with trash and fish scraps.

Uneducated fishermen—many of whom are visitors—will often feed bears directly or leave scraps nearby. After years of this dangerous practice, bears now see humans as walking food trucks.

“They would throw their fish to the bears or leave the chum on the beach. Bears have learned from this and now they think, ‘Oh hey, there’s another human with a pole. That means food,” Long said.

She also noted there were two key elements behind the historic 2020 bear rampage. They’re the same factors that underscore any year with a higher than average amount of bear damage.

“That was a really bad year for fish and berries combined. The berries weren’t there, and the fish just weren’t there,” she said.

Other than fish, wild berries provide another important food source for Alaska’s ursid population. A combined scarcity can force hungry bears to shift from regular hunting and foraging to full-blown ransacking.

“It’s the availability of natural foods. In 2020, it was a very low fish year and there weren’t many berries around,” Roy Churchwell, told The Epoch Times.

Churchwell is a biologist for the Alaska Department of Fish and Game. He said the fish and berry supply was a little better in 2021 but “still not great.”

He also says that bear rampages aren’t on the rise, per se. It completely depends on food availability, which varies from year to year.

“For example, if wild foods become available again, it’s very common for bears to go back to those wild resources,” Churchwell said.

When hungry bears can’t find enough to eat in the woods, they often wander into cities and towns.

Every year, they cause thousands of dollars in property and vehicle damage. They tear open doors to homes and cars, break through windows, and demolish storage sheds.

Churchwell noted that Haines has problems with both black and brown bears, which are the species normally encountered in Southeastern Alaska.

Confrontations with grizzlies are more common in the interior portion of the state.

Despite the fierce reputation of Alaskan grizzlies, black bears alone account for upwards of 40,000 damage complaints to agencies throughout North America every year.

Preventing bear damage goes far beyond rookie stuff like leaving unsecured food out in the open. A black bear’s scent capacity is estimated to be seven times greater than that of a bloodhound.

That means leaving something as simple as a recently used fishing pole in your car will entice unwanted attention from bears. Moreover, things like empty fast food boxes and wrappers offer a nearly irresistible temptation.

Though sometimes even smelling “too fishy” after a day on the water is enough to prompt an attack, according to Long.

She recalled an episode in 2019 where a bear attempted to maul her after she returned from a pleasant day of beach fishing. Long said the prompt response of her dog, which launched a counterattack on the aggressive bear, proved to be enough of a deterrent to allow her to escape.

Long laughed while recalling the incident. “When I saw that bear reaching for me, I thought, ‘here we go.’”

Other locals in Long’s circle have had their own ugly run-ins with local bears.

“One of my best friends and her neighbor had their cars totally destroyed because a bear got in and just tore it apart,” she said.

In addition to cars, garages, mudrooms, and storage sheds, sunrooms are inviting targets for bears due to the prevalence of food storage in deep freezers along with hunting and fishing equipment.

“We’ve learned how to deter them,” Long explained. “You store your crab gear, your longline gear, outside in a shed. Then use plywood with screws sticking out that will injure the bear’s paws if they try to press on the door. It works as a fantastic deterrent.”

Gear storage aside, there’s still a trash problem to address.

Haines local Charlene Jones told The Epoch Times area bears near town have literally been “trained by the trash.”

Jones says that 2022 has been a better year for fish and berries, which allows residents to breathe a little easier.

This year, all she had to do was yell at the bears nosing around her property to make them leave.

Yet even with a more abundant food supply, vigilance must still be maintained. Jones said that, along with her neighbor, “We tame our trash like we’re on a mission from god.”

“Because all the bears taught their bear children to go and eat human trash. It’s a generational thing,” Jones said.

Churchwell agrees that appropriate waste management is critical. “It’s difficult to get people to secure their garbage … and other bear attractants. If we can do that, it goes a long way.”

Though looming in the backdrop of food supply and waste management is the impact of nearby farms on Alaska’s aquatic culture.

Long says that once fish farming became prevalent, she noticed a distinct change in what she was reeling in on her line.

“I caught a fish—like five years ago—and when I pulled it out of the water, I couldn’t even tell what it was,” she said.

After cutting into the fish, Long was instantly appalled, “The meat was a strange color and there were worms in it. That’s when I knew something was wrong.”

“No one here [in Haines] like them. When you drive around, you see a lot of bumper stickers against fish farms.”

In the meantime, Long thinks it’s a perfect storm of factors that are driving the changes she’s seen in the demeanor of local bears.

“Maybe it was years of us changing their behavior and it finally just blew up in our faces. I don’t think it was just one thing.”