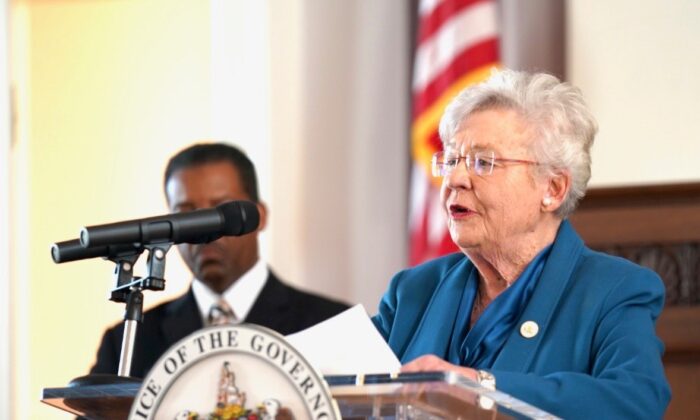 A former business owner in Alabama filed a lawsuit on March 19 against Republican Gov. Kay Ivey and state Health Director Scott Harris, alleging that the COVID-19 lockdowns implemented by the executive branch resulted in a loss of $54,680 and caused the shop’s closure.

Saranne Riccio, the business owner who opened Uncorked Wine Shop & Tasting Room in Huntsville, Alabama in 2018, is represented by Matt Clark, an attorney with the Alabama Center for Law and Liberty (ACLL).

Even under an extended emergency, it’s a violation of the separation of powers, Clark said.

The order also forbade a gathering of 25 people or more.

Clark said Riccio made 70 percent of her gross profit from customers entering the shop to taste wine, and that the business was garnering good reviews. Then when COVID-19 hit, Ivey and Harris began issuing restrictions that left Riccio’s shop classified as nonessential, a death sentence for many businesses across the nation.

Even after Ivey began walking the state back out of the restrictions, Riccio’s business continued to be subject to limitations—such as how many people could be allowed in the shop and how socially distant they needed to be from each other—until April 2021.

By then it was too late, Clark said.

“With all the restrictions gone, she was still left trying to figure out how to make up for all the money she lost,” Clark said. “She had to close later in 2021, and she just narrowly escaped bankruptcy.”

“We are suing for restitution for our client and to set a precedent stating that if anything ever happens like this again, a special session needs to be called of the legislature so that the people’s representatives can debate the matter and decide what the rules are going to be,” Clark said. “The people’s representatives are the ones who represent the small business owner, and hopefully—if something were to ever happen like this again—they can figure out a way to create a win-win where you protect public safety and ensure that small business owners continue to make a living instead of being shut down.”

‘A Herd of Turtles’

The lawsuit cites a Yellowhammer News article that cites Ivey dismissing a bill that would have allowed for representatives to have a say in the COVID restrictions. Ivey said, “In an emergency, you don’t need a herd of turtles gathering to make an emergency decision.”

Former state Sen. Phil Williams and chief policy officer for the Alabama Policy Institute—parent company of the ACLL—responded to Ivey’s comments by saying, “For the governor to so cavalierly dismiss the legislative branch of government in that way is a step too far. For a year she has had sole reign in Montgomery to shut down businesses, extend legislation that was not hers to extend, and spend CARES ACT funds on government instead of the private sector.”

Williams said Ivey could have called the legislature into a special session, “but chose not to do so.”

‘Little to No Effect’

The lawsuit cites a study from the John Hopkins University that says the lockdowns had “little to no effect” on the COVID-19 pandemic and that the lockdowns “imposed enormous economic and social cost” to businesses.”

“These costs to society must be compared to the benefits of lockdowns, which our meta-analysis has shown are marginal at best,” the study states. “Such a standard benefit-cost calculation leads to a strong conclusion: lockdowns should be rejected out of hand as a pandemic policy instrument.”

‘It Was a Mistake’

In a December 2020 interview with WSFA-TV, Ivey said it was a mistake to mandate that some businesses close, adding that “all businesses are essential.”

“So, since May, I have absolutely had no conversation about closing any of our businesses, because our people deserve to be able to earn a livelihood.”

A spokesperson for both the governor’s office and the state health director’s office said the agencies couldn’t comment on pending litigation.