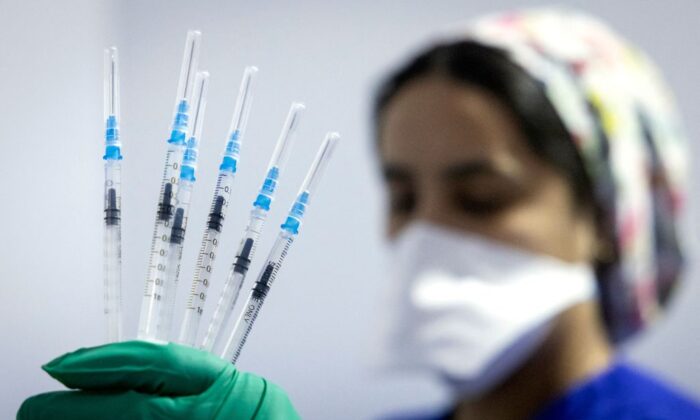 Syringes of the Pfizer-BioNTech vaccine in the city of Sale, on Oct. 5, 2021. (Fadel Senna/AFP/Getty Images)
Vaccines & Safety

Alabama Attorney General Steve Marshall said on Nov. 2 that he had filed a lawsuit against an important part of the vaccine mandate introduced by the Biden administration.

Marshall filed the lawsuit with the goal of stopping the federal mandate from being enforced in any state before it comes into effect on Dec. 8.

Marshall said the mandate was “flagrantly unconstitutional” and accused the mandates of being “contemptible infringements on individual liberty, federalism, and the separation of powers.”

He gave the example of a federal contractor who would be required to be vaccinated under the mandate even if he was working from home and “could not possibly infect or be infected by his coworkers.”

Since the mandate would apply to any worker who shares the same parking garage as the federal contractor, Marshall said Biden could eventually justify having the authority to extend the mandate to the contracted employee’s family members, including children.

The Centers for Disease Control and Prevention on Tuesday night recommended almost every child in the United States between 5 and 11 get Pfizer’s COVID-19 vaccine.

Marshall also noted that months before the Sept. 9 announcement, the Biden administration said that enforcing a mandate was “not the role of the federal government.”

Regarding the vaccine mandate for private-sector businesses with 100 or more workers, Marshall vowed to file a lawsuit against Biden “as soon as the private-employer mandate goes into effect.”

Just last week 10 GOP-led states sued the Biden administration over the vaccine mandate, which was accused of being “unconstitutional, unlawful, and unwise” (pdf).