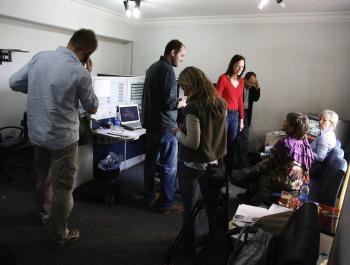 By Gary Feuerberg
Print
WASHINGTON—As protests in one country have followed the next—Tunisia, Egypt, Yemen, Bahrain, Libya, Syria, and now Jordan—correspondents have had the best seats to view history unfold in what’s become known as Arab Spring.

Arab-American correspondent for Al-Jazeera, Ayman Mohyeldin, was there at the end of January when the Egyptian regime sent thugs to shut down his media’s operations in Cairo and detain journalists—including eventually himself. Speaking at the New America Foundation Mar. 29, Ayman Mohyeldin switched hats from journalist to providing his own perspective about the meaning of the dramatic events he has been witnessing.

Mohyeldin, 31, was born in Cairo, and carries dual citizenship. He is based in Cairo, and covered the 2011 protest in Tahrir Square for Al Jazeera in English that led to the overthrow of President Hosni Mubarak.

The regime’s Ministry of Information revoked Al Jazeera’s license to broadcast, stopped their major satellite service, confiscated their equipment, arrested their reporters, and sent thugs to trash the newsroom of Al Jazeera’s Arabic channel on the fifth floor of a downtown Cairo office building. Colleague Ahmed Mohammed Mahmoud was shot and killed by a police sniper as he filmed the crackdown on protesters on January 29.

Later, Mohyeldin himself was blindfolded and handcuffed by the Egyptian military as he tried to enter Tahrir Square. He was released after nine hours, but his colleagues were held longer.

Mohyeldin has worked for NBC in Washington and CNN. From D.C. he covered President George Bush’s inauguration and 9-11. He has covered Egypt, Lebanon, the Gulf, and was inside Gaza during the Israel airstrikes in 2008 and 2009, as one of the only foreign journalist reporting. He admits his career has taken off rather quickly because of his fluency in Arabic and the importance of the Middle East in the news now. Also, Mohyeldin’s profile has risen as Al Jazeera has arguably provided the most comprehensive coverage of the tumultuous events in the Middle East in recent months.

What was it like to be in Tahrir Square during those weeks leading up to Mubarak’s departure? Mohyeldin says it was often “exhilarating.”

Mohyeldin said it was like a city-state in Tahrir Square with make-shift clinic, make-shift restaurants, and make-shift entertainment.

“It had everything Egyptians hoped their country could be, and for the first time in a long time, Egyptians were optimistic about themselves as a people,” he said. He added, “All of this came to the surface and reinvigorated ordinary Egyptians into believing in themselves in what they were trying to do.”