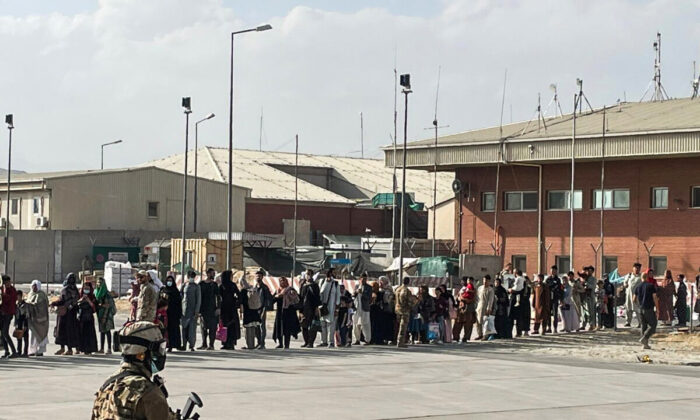 Afghan evacuees queue before boarding one of the last Italy's military aircraft C130J during evacuation at Kabul's airport, Afghanistan, on Aug. 27, 2021. (Italian Ministry of Defence/Handout via Reuters)
Afghanistan

A U.S. military spokesman confirmed that a U.S. military airstrike targeted a suicide bomber who tried to attack the Kabul airport on Aug. 29 amid the American-led evacuation of the airport.

“We are confident we successfully hit the target. Significant secondary explosions from the vehicle indicated the presence of a substantial amount of explosive material. We are assessing the possibilities of civilian casualties, though we have no indications at this time.”

Zabihullah Mujahid, the main Taliban spokesman, had earlier told The Associated Press and other outlets that the strike occurred on Aug. 29.

Unnamed U.S. officials told Reuters and other news outlets on Aug. 29 that a military strike was launched against a possible suicide car bomber who was targeting the airport. Witnesses told Al Jazeera that they heard a loud explosion near the facility, and footage showed black smoke rising into the sky.

The incident comes after the Pentagon confirmed it killed two ISIS-K terrorists in Afghanistan over the weekend.

“The fact that two of these individuals are no longer walking on the face of the earth, that’s a good thing,” Pentagon spokesman John Kirby told reporters on Aug. 28.

That airstrike came in retaliation to a bombing at the Kabul airport that killed 13 U.S. military members and numerous other civilians last week. ISIS-K claimed responsibility for the blast.

“We aren’t thinking for a minute that what happened yesterday gets us in the clear,” Kirby said. “Not a minute. But do we believe that we hit valid targets, bad guys who can do bad things and can plan bad missions? Absolutely. And do we think that that will have some impact on their ability going forward? Absolutely.”

The airstrike comes as President Joe Biden and other administration officials have taken significant bipartisan criticism over how he’s handled the pullout from Afghanistan. In comments during news conferences, Biden has defended his administration’s response and said the pullout had to be done, although he and other White House officials have provided conflicting information about the situation on the ground in Kabul.

The U.S. Embassy in Kabul issued a warning on Aug. 28 that Americans who are within the vicinity of the airport should “leave the airport area immediately” due to the possibility of another attack.

On Aug. 29, Secretary of State Antony Blinken said that about 300 Americans remain in the country.

“We are down to a population of 300 or fewer Americans who are still on the ground there, and we are working actively in these hours and these days to get those folks out,” he told ABC News.