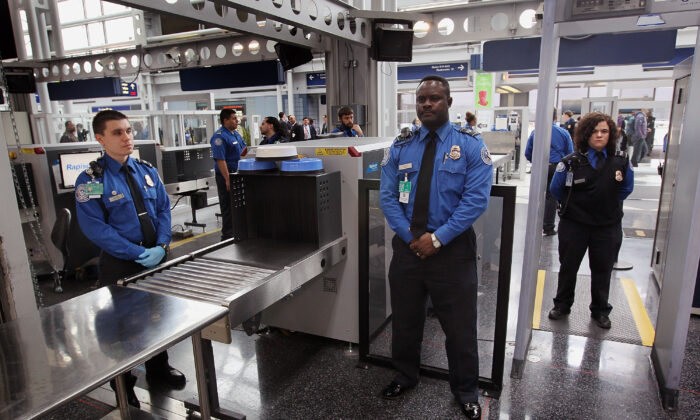 Up to 40 percent of TSA workers, who oversee airport security checkpoints, have not gotten vaccinated yet, the GOP lawmakers wrote in a letter to TSA Administrator David Pekoske. They requested that Pekoske provide an update on whether a staffing shortage of TSA workers looms and if the agency has a contingency plan in place.

“Unfortunately, it appears TSA is headed toward a scenario in which up to 40 percent of its workforce may not be compliant with the President’s Executive Order by the November 8 deadline. Such a scenario could have severe impacts on transportation security and the aviation, travel, and tourism industries,” said Sen. Roger Wicker (R-Miss.), the ranking senator on the Transportation Committee, and Rep. John Katko (R-N.Y.), the ranking member of the House Homeland Security Committee.

In mid-October, Pekoske told CNN that as many as 4 out of 10 TSA workers, including security screeners, haven’t received the vaccine yet.

Pekoske added that his agency is “building contingency plans” over possible staffing shortages. Although Nov. 8 is the deadline for all federal workers to get vaccinated under an executive order signed by Biden in September, Pekoske hasn’t provided an update since his CNN interview aired.

At the time, a spokesperson for the Department of Homeland Security (DHS), said that the vaccination statuses among workers are self-reported to the agency, and Pekoske’s remark doesn’t necessarily mean that 40 percent of TSA workers haven’t received the shot. The Epoch Times has contacted DHS for comment.

And while the GOP lawmakers said they believe vaccines are the best way for TSA workers to protect their coworkers and others, they warned that Biden’s mandate may cause “significant disruptions” to air travel and the agency’s operations—namely, as the holiday travel season approaches.

“Employees who refuse to be vaccinated or provide proof of vaccination are subject to disciplinary measures, up to and including removal or termination from Federal service,” OPM Director Kiran Ahuja wrote. “The only exception is for individuals who receive a legally required exception pursuant to established agency processes.”

Other than mandates for federal workers, Biden during his Sept. 9 speech that federal contractors—who have a Dec. 8 deadline—and most healthcare workers would also be required to get the vaccine. His administration also directed the Department of Labor to craft an emergency rule to require private businesses with 100 or more workers to either mandate their employees to get vaccinated or submit to weekly COVID-19 testing.

Also in recent weeks, both American Airlines and Southwest Airlines, which are both federal contractors, were forced to cancel or delay thousands of flights due to inclement weather and unspecified staffing issues. Both airlines stressed that the delays were not related to the pending vaccine mandate.