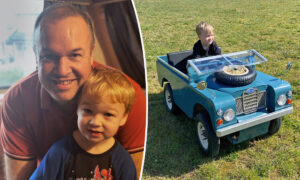 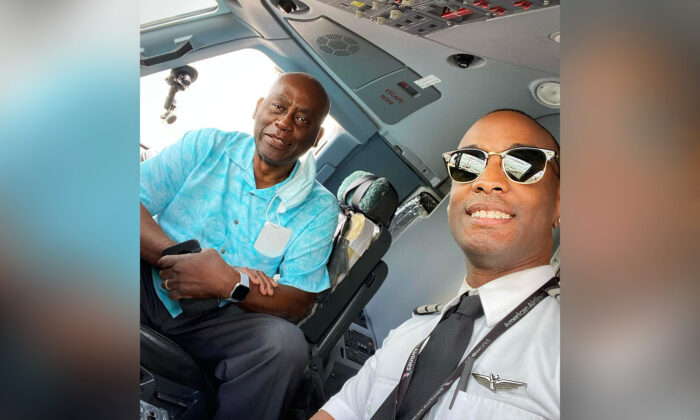 A video of an airline pilot making an announcement before a flight went viral on Instagram.

Captain Anselm Dewar was moved to tears on informing his passengers they had a “VIP aboard” for a return flight from Miami to Charleston, South Carolina—the VIP was his father, who would be sitting at the controls with him.

The flight was the first they’d shared together in Dewar’s 10 years as a pilot.

The captain, with Envoy Air/American Eagle, a regional branch of American Airlines, had qualified for commercial flights in 2011, having dreamt of being a pilot since the age of 3.

He shared footage of himself making the PA announcement, and photos of his father exploring the cockpit, on Instagram, hailing the day as “one of the most memorable and best” of his life.

“The stars aligned and I was finally able to get my dad out on a trip with me on the jet,” he wrote.

In his touching message, Dewar introduced passengers to the “VIP” with a little background—born in Kingston, Jamaica, Dewar’s father migrated to Toronto, Canada, in the late ’60s; now he lives in Georgia state.

“For the past 34 years he’s had to deal with me, and I think he’s done a great job at it,” Dewar joked, his voice cracking as he shared words of gratitude.

“I’m trying to hold the tears back; I didn’t think I’d cry, but this is a very special and very important flight to me because it’s the first time I’ve flown with my father.

Dewar promised to make the flight—a belated birthday gift for his dad—as comfortable as possible.

The pilot credits his father for his early passion in aviation.

“My father is a cartographer,” Dewar told WSVN. “And he had a bunch of computers and put Flight Simulators on it for me to play, so because of him is where it first started.”

Since qualifying in 2011, Dewar had wanted the opportunity to fly his parents—until now. He said that he and his father are now working on getting his mother onboard to share in what he loves best.

“Dad … I hope I’ve made both you and Mom proud,” Dewar posted on Instagram. “I hope you enjoyed the ride.”