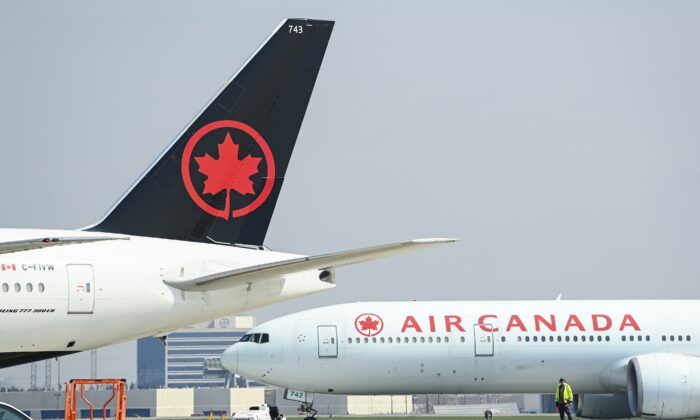 Air Canada planes sit on the tarmac at the Pearson International Airport in Toronto on April 28, 2021. (The Canadian Press/Nathan Denette)
By Isaac Teo

Air Canada is cancelling more than 15 percent of its daily flights this summer as the industry struggles with “unprecedented and unforeseen strains” on its operations amid an overwhelming travel resurgence.

The move will see the airline cutting 77 round trips (or 154 flights) on average per day in the months of July and August. Air Canada is currently operating on average about 1,000 flights a day.

“Four routes will be temporarily suspended, between Montreal and the cities of Pittsburgh, Baltimore and Kelowna, and one between Toronto and Fort McMurray,” the company said in an email on June 30.

“Most of the flights affected are to and from our Toronto and Montreal hubs. These will be mostly frequency reductions, affecting primarily evening and late-night flights by smaller aircraft, on transborder and domestic routes.”

The airline stressed that international flights are unaffected, but will be subjected to “a few timing changes to reduce flying at peak times” and to “even out the customer flow.”

In a message to customers on June 29, chief executive Michael Rousseau said it was “not an easy decision” for him.

“Regrettably, things are not business as usual in our industry globally, and this is affecting our operations and our ability to serve you with our normal standards of care,” he said.

“The COVID‑19 pandemic brought the world air transport system to a halt in early 2020. Now, after more than two years, global travel is resurgent, and people are returning to flying at a rate never seen in our industry.”

Rousseau said the surge in travel has caused “unprecedented and unforeseen strains on all aspects of the global aviation system,” causing recurring flight delays and congestion in airports around the world.

Compared to other industries that are also struggling to restart due to the “unclog supply chains” and “pent-up demand,” Rousseau said Air Canada foresaw those challenges and was taking steps during the pandemic to be prepared for the “rapid restart.”

“Yet, despite detailed and careful planning, the largest and fastest scale of hiring in our history, as well as investments in aircraft and equipment, it is now clear that Air Canada’s operations too have been disrupted by the industry’s complex and unavoidable challenges,” he said.

“The result has been flight cancellations and customer service shortfalls on our part that we would never have intended for our customers or for our employees, and for which we sincerely apologize.”

Airlines and the federal government have been scrambling to respond to scenes of endless lines, flight disruptions, lost luggage and daily turmoil at airports—particularly at Toronto Pearson International Airport—a problem the aviation industry has blamed on a shortage of federal security and customs officers.

On June 10, the federal government announced the suspension of random COVID-19 testing at all airports for vaccinated travellers until the end of the month.

The development came as airports and industry groups had asked for the program to be dropped in recent weeks. Airports and airlines have said they are dealing with significant congestion due to the various COVID-19 travel mandates, leading to long waits for travellers.

On June 29, the Public Health Agency of Canada announced that random testing will continue to be paused until mid-July. However, travellers are still required to submit their travel information within 72 hours before arrival in Canada through the ArriveCAN app, regardless of their vaccination status.

Rousseau said in order to stabilize its operations, Air Canada will need to make “meaningful reductions” to its summer schedule “in order to reduce passenger volumes and flows to a level we believe the air transport system can accommodate.”

“This was not an easy decision, as it will result in additional flight cancellations that will have a negative impact on some customers,” he said.

“But doing this in advance allows affected customers to take time to make other arrangements in an orderly manner, rather than have their travel disrupted shortly before or during their journey, with few alternatives available.”