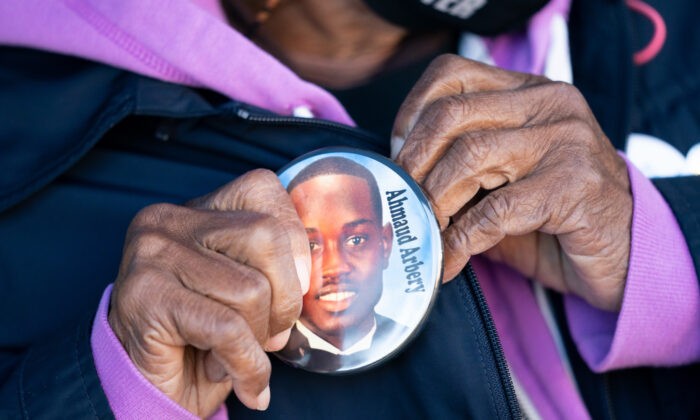 Annie Polite puts on a button for Ahmaud Arbery outside the Glynn County Courthouse as the jury deliberates in the trial of the killers of Ahmaud Arbery on Nov. 24, 2021 in Brunswick, Georgia. (Sean Rayford/Getty Images)
US News

Marcus Arbery, the father of Ahmaud Arbery, who was fatally shot on a residential street last year, issued a message of unity following the guilty verdicts of three Georgia men on Wednesday, saying: “All lives matter.”

“For real, all lives matter, not just blacks, we don’t want to see nobody go through this,” Marcus Arbery said outside the courtroom, shortly after a Georgia jury found all three men guilty in the killing of his son following two days of jury deliberations.

“All human beings should be treated equally,” he added.

Moments earlier, the three men—a father and son Gregory McMichael, 65, and Travis McMichael, 35, and their neighbor William “Roddie” Bryan Jr., 52—were convicted of murder, with the jury dismissing a self-defense claim.

They faced nine counts each in Arbery’s death, including malice murder, felony murder, and aggravated assault.

Defense lawyers have said they will appeal.

Reacting to the guilty verdicts, Arbery’s mother, Wanda Cooper-Jones, expressed her relief in front of the courthouse.

President Joe Biden said in a statement that the convictions showed the U.S. criminal justice system is “doing its job,” though Arbery’s murder was “a devastating reminder of how far we have to go in the fight for racial justice in this country.”

“Instead, we must recommit ourselves to building a future of unity and shared strength, where no one fears violence because of the color of their skin,” Biden said.

Vice President Kamala Harris meanwhile accused the defense counsel of “setting a tone that cast the attendance of ministers at the trial as intimidation and dehumanized a young black man with racist tropes.”

“The jury arrived at its verdicts despite these tactics,” she said.

“Ahmaud Arbery was a son. He was a brother. He was a friend. His life had meaning. We will not forget him. We honor him best by continuing the fight for justice,” Harris added.