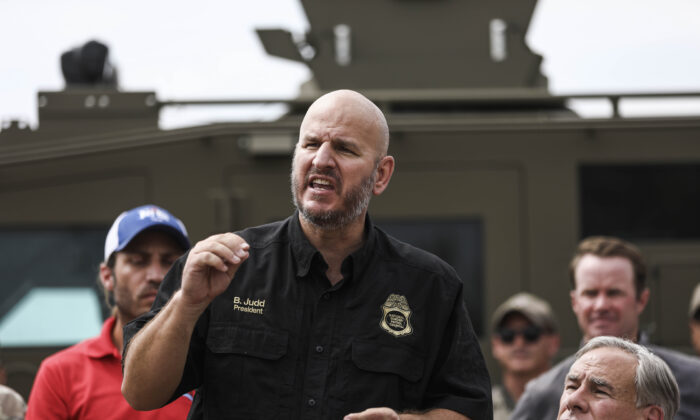 DEL RIO, Texas—The U.S. Border Patrol agents who were falsely accused of striking illegal immigrants at the U.S.–Mexico border have had their careers “ruined” by President Joe Biden, the head of the agency’s union told The Epoch Times.

“Their careers were ruined by this president,” said Brandon Judd, president of the National Border Patrol Council.

A slew of media outlets in the fall of 2021 claimed that Border Patrol agents on horseback had whipped Haitian aliens who were entering the United States by crossing the Rio Grande at Del Rio, Texas. The outlets later backtracked on the claims.

Biden told reporters he observed that the agents had “strapped” the immigrants, calling what happened “outrageous.”

“I promise you, those people will pay. They will be—an investigation is underway now, and there will be consequences. There will be consequences. It’s an embarrassment. But beyond an embarrassment, it’s dangerous; it’s wrong. It sends the wrong message around the world. It sends the wrong message at home. It’s simply not who we are,” he said at the time.

However, an internal review released on July 8 said there was “no evidence” that agents “struck any person, intentionally or otherwise.” Further, U.S. prosecutors declined to charge any of the agents involved, Customs and Border Protection (CBP) revealed.

“The president accused them of a criminal act. He has not apologized for that,” Judd told The Epoch Times.

He said he doesn’t expect Biden or Vice President Kamala Harris, who said she was “outraged” by the treatment of illegal immigrants, to apologize.

The agents were quickly placed on administrative duty after the widespread coverage of the incident on Sept. 19, 2021. At the time, as many as 30,000 mostly Haitian illegal immigrants had entered the United States and created a makeshift camp under a bridge that connects Del Rio, Texas, and Mexico’s Ciudad Acuña, while waiting to be processed by Border Patrol. Rumors of a riot had been circulating as conditions deteriorated.

Four agents are facing disciplinary charges, CBP Commissioner Chris Magnus told reporters during a briefing on July 8. According to the report, that includes an agent who acted unprofessionally by shouting at an illegal immigrant and nearly coming into contact with a small child on the concrete ramp leading out of the river.

On multiple occasions, mounted agents “used force or the threat of force to drive migrants back into the Rio Grande River despite the fact they were well within the territorial boundary of the United States,” the report stated.

“We’re not going to be discussing specifics of the disciplinary proposals today. But when it’s appropriate to do so, we will make the final disciplinary actions public consistent with the privacy rights of the individual employees,” Magnus, a Biden appointee, told reporters.

The Border Patrol union is representing three agents; the fourth person facing discipline is a supervisor, according to Judd.

He said he fears investigators “had no choice but to find some sort of fault” given the quick condemnation from Biden, Harris, and Homeland Security Secretary Alejandro Mayorkas.

“And the fault that they found is some of the flimsiest I’ve ever seen in my 25-year career. In seeing disciplinary proposals time and time again, I have never seen a more flimsy proposal,” Judd said.

He said the situation has been “absolutely demoralizing” to agents because the agents involved were performing a legitimate law enforcement operation.

A Border Patrol agent in the Del Rio Sector, speaking on condition of anonymity because of fear of repercussions, told The Epoch Times that agents on the ground were set up by leadership for failure in a “no-win situation,” because of a lack of manpower and capability to effectively handle the flood of illegal aliens who were entering the United States on the day in question.