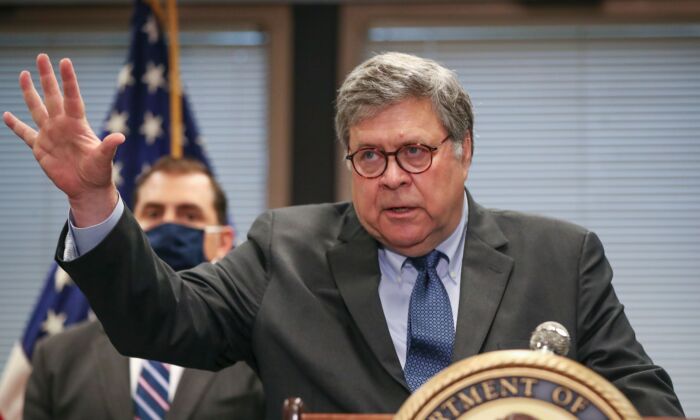 US Attorney General William Barr speaks on Operation Legend, the federal law enforcement operation, during a press conference in Chicago, Ill., on Sept. 9, 2020. (Kamil Krzaczynski/AFP via Getty Images)
US News

“I am pleased to report that Operation Legend is working, crime is down, and order is being restored,” Barr said during a Sept. 9 press conference in Chicago.

The crime-fighting initiative is credited with more than 2,500 arrests, including 592 individuals who were charged with federal crimes, the Justice Department (DOJ) said in an update. Federal authorities have also seized 1,024 firearms, 241 other weapons, more than 17 kilograms (37 pounds) of heroin, more than 75 kilograms (165 pounds) of methamphetamine, more than 7 kilograms (15 pounds) of fentanyl, more than 12 kilograms (26 pounds) of cocaine, and about $5.19 million in drug proceeds.

Operation Legend is the latest major law enforcement program by the DOJ to crack down on violent crime across the country. It began to combat a surge in crime rates in major metropolitan cities.

The operation began in Kansas City, Missouri, and has since been expanded to eight other cities, including Chicago; Albuquerque, New Mexico; Memphis, Tennessee; and St. Louis. It involves surging federal agents and resources to inner cities to assist local and state law enforcement officials to tackle violent crime and restore public safety.

The program was named after 4-year-old LeGend Taliferro, who was shot and killed while sleeping in his home in Kansas City in June; a suspect has since been arrested.

Many major metropolitan cities have recently seen a disturbing uptick of violent crime, especially homicides and nonfatal shootings. In Chicago, there were 440 homicides and 2,240 people shot between January and July. In the same time period in 2019, the number of homicides was at 290 with 1,480 shootings.

The latest crime statistics released by the Chicago Police Department (CPD) found that there was a 45 percent drop in murders and a 15 percent fall in shooting incidents in August compared to the previous month. The department said the latest murder figures in August were the lowest numbers since April.

Although there were drops in violent crime, the city recorded 503 shooting victims and 63 homicides in August. That compares to 268 and 49, respectively, in the same month last year.

In its statement, the police department attributed the reductions in violent crime to the launch of two citywide teams, but Barr said during the press conference that Operation Legend played “a critical role in cutting the city’s murder rate roughly in half since before the operation.”

“Operation Legend’s success is perhaps most dramatic here in Chicago,” Barr said. “When the operation was announced on July 22, homicides in the city were up 51 percent over 2019. Over the previous weekend, more than 60 people had been shot in Chicago, with over a dozen fatalities.”

The CPD didn’t immediately respond to The Epoch Times’ questions about the operation.

During a separate press conference on Sept. 9, Chicago Mayor Lori Lightfoot responded to Barr’s comments linking the city’s falling murder rate to the success of the operation, saying “nobody should be taking a victory lap,” at this time.

“We are absolutely making progress, we are absolutely leaning into those federal relationships, but the cause and effect that Attorney General Barr tried to make today, I don’t think the facts bear that, not yet,” Lightfoot said. “I’m hopeful that these relationships and these additional resources would really bear fruit, but we’re still in the early stages.”

Similarly, Kansas City saw similar drops in violent crime following the launch of the program. The city’s police department stated on Aug. 25 that overall violent crime had decreased by 30 percent when comparing six weeks of crime statistics prior to the operation with current data. Homicides went from 33 cases between May 6 and July 7 to 28 cases between July 8 and Aug. 23—a 15 percent decrease.

“While we can’t say Operation LeGend is the cause of this decrease, there’s certainly a correlation,” Kansas City Police Chief Richard Smith said in a statement.

Barr also said homicides in St Louis have also fallen by 47 percent in the four weeks since the operation began. Meanwhile, in Detroit, homicides have dropped by more than 25 percent, he said.

“The increase in violence that has plagued Chicago and other cities is what prompted the department to launch Operation Legend two months ago in Kansas City, Missouri,” the attorney general said. “The Operation is named for LeGend Taliferro, a 4-year-old Kansas City boy shot and killed.

“The purpose of the operation was to make clear that his life mattered, his name should be remembered and other innocent victims like him, including the 8-year-old girl killed in Chicago on Labor Day, should not suffer such senseless death.”

In Chicago, authorities have charged 124 individuals with federal crimes. Other cities have also seen a similar trend: 113 federal arrests in Kansas City; 45 in Albuquerque; 66 in Cleveland; 58 in Detroit; 16 in Milwaukee; 123 in St. Louis; 16 in Memphis; and 31 in Indianapolis.

The story has been updated to include comments from Chicago Mayor Lori Lightfoot.